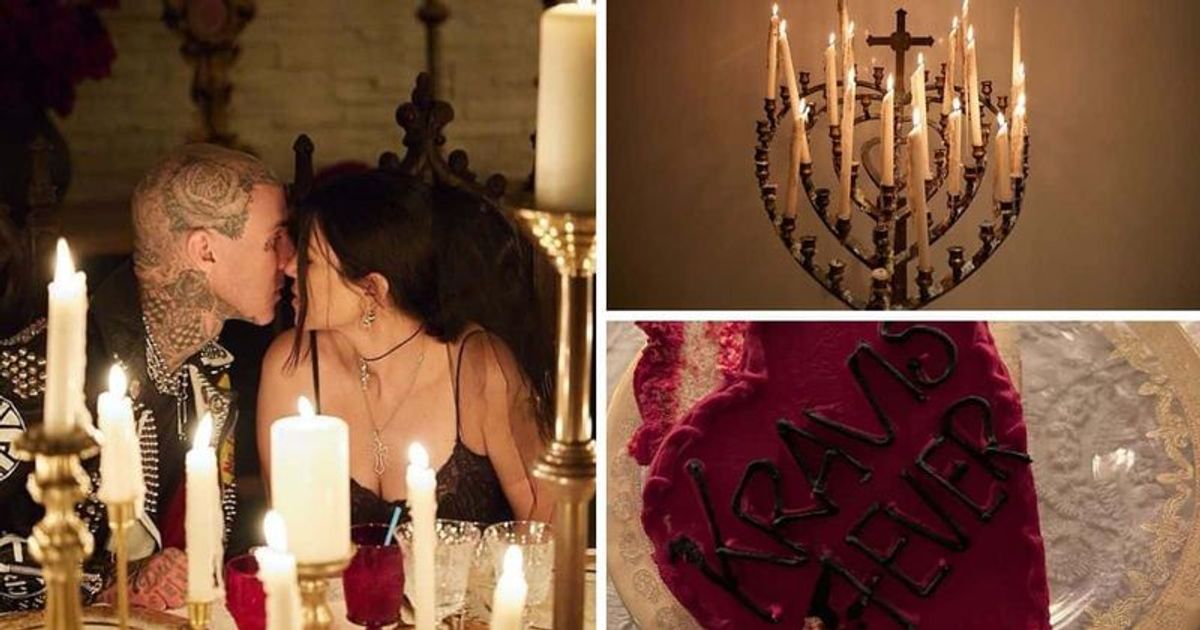 The couple, who officially tied the knot on May 15 this year, is said to have married for the fourth time, according to fans

If you’ve been on social media, it’s hard to miss the almost daily Instagram posts from Kourtney Kardashian and Travis Barker. The latest is the ‘Romeo and Juliet Mood for the Bach’ as ​​it was dubbed by Kourtney on Wednesday June 8th and has been the talk of the town ever since. Fans believe the couple has celebrated their fourth wedding, calling it a “creepy and satanic” ceremony full of blood vials and skulls.

Kourtney, who shares the pics with a heart and a skull emoji, can be seen in the first pic in a low-cut black lace dress with a topknot as she leans towards Travis. The second in the slideshow, which consisted of nine images and a video, showed the medieval lace-topped table set with several chairs and many lit candles for dinner. Followed by the third, which featured a heart and a cross of candles, while the fourth featured a crimson cake that said “Kravis Forever.” There was also a photo of Kourtney slapping a heart-shaped jeweled purse, and in the last an unmarked container of liquid with a cork enclosing it.

Although the reality star mentions “bach” in her post, indicating a bachelorette party, fans couldn’t help but emphasize that it was their fourth wedding. One said: “Are you all still getting married? Lmao.” On the other hand, many thought it looked “satanic”. One fan dropped a comment saying: “No you actually both sacrificed yourselves. Why are you lying to your supporters?” Another said, “What the heck is going on here?” “Am I the only one wondering if that ended up being a vial of blood?” asked a fan.

Travis and Kourtney have been friends and have been in the same social circle for years since sister Kim was Paris Hilton’s personal assistant. In February 2019, Kourtney and Travis sparked dating rumors when they were spotted having dinner in Malibu and Travis left a rose emoji in the comments of one of Kourtney’s mirror selfies. The buzz grew much louder as everyone posted photos from the same hillside at Kris Jenner’s Palm Springs home.

In February 2021, Kourtney and Travis made their relationship official. However, on May 15, 2022, the two officially married in an intimate ceremony in the presence of only Travis’ father and Kourtney’s grandmother. This was followed by a lavish wedding in Italy on May 22, 2022. The couple had married at a fake wedding in Las Vegas in April 2022.