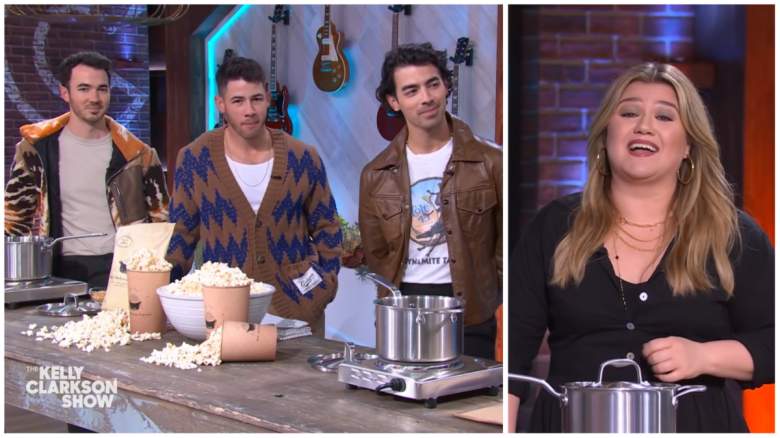 American Idol winner Kelly Clarkson teams up with her The Voice coach Nick Jonas and his bandmates and brothers Joe and Kevin to bring a new flavor of popcorn to life.

Rob’s Backstage Popcorn started with Rob Garbowsky, the man behind the brand, perfecting his popcorn seasoning recipe at home for friends and family. Then, after a Jonas Brothers concert in 2011 was rained out, Rob’s son Greg (the band’s bassist at the time) took Nick home to his family for dinner. Rob made them a batch of his popcorn, and after eating it backstage at their concerts for ten years, the Jonas Brothers began selling the popcorn nationwide.

Now, Clarkson is joining the team to collaborate on a new flavor, Kelly’s Classic BBQ, that adds her Southern twist to the founder’s original flavor. Kelly’s Classic BBQ makes its debut in stores across the United States today, January 13.

The Jonas Brothers and business partner Rob Garbowsky appeared on The Kelly Clarkson Show last spring to introduce their popcorn to Clarkson’s audience and announce their nationwide retail launch.

During the show, Rob’s Backstage’s backstage popcorn team made a live-on-air batch of popcorn with Clarkson, who was an avid fan. Garbowsky told Clarkson that it took a while to master his recipe and find the perfect balance of flavors, saying, “You mentioned the salt and the sweet, the other part was the savory. It was really about getting those three parts in a nutshell, because each of them can overpower the other.”

Clarkson’s band Y’all also enjoyed the popcorn later in the episode, while Clarkson challenged the Jonas Brothers to a Las Vegas trivia contest ahead of their Las Vegas residency, which will return to the Park MGM Theater for select dates in February (Kevin and Nick won and Kelly and Joe beat, although they still gave each spectator two tickets to the brothers’ residence).

This is the first celebrity partnership for Rob’s Backstage Popcorn, and on the back of the bag is a quote from Rob showing how excited he is about this collaboration before discussing her inspiration for the flavor. “This flavor stems from Kelly’s southern roots to create a sweet and smoky barbecue-flavored popcorn like you’ve never had before.”

The celebrities worked with Garbowsky to test countless variations of the popcorn seasoning before arriving at their final taste, and were also involved in the packaging design, which alongside the quote includes horseshoes, cacti, and horse saddles, all reminiscent of Clarkson’s Texas roots .

Just like the original flavor, Kelly’s Classic BBQ is available online ($23.99 per 4-pack at eatrobs.com) and in stores nationwide at Walmart and Albertsons. The flavor is also coming to Sam’s Club on January 27 and Kroger stores in February, according to a representative for the team. There is a store locator on the company’s website for those wanting to find their nearest retailer.