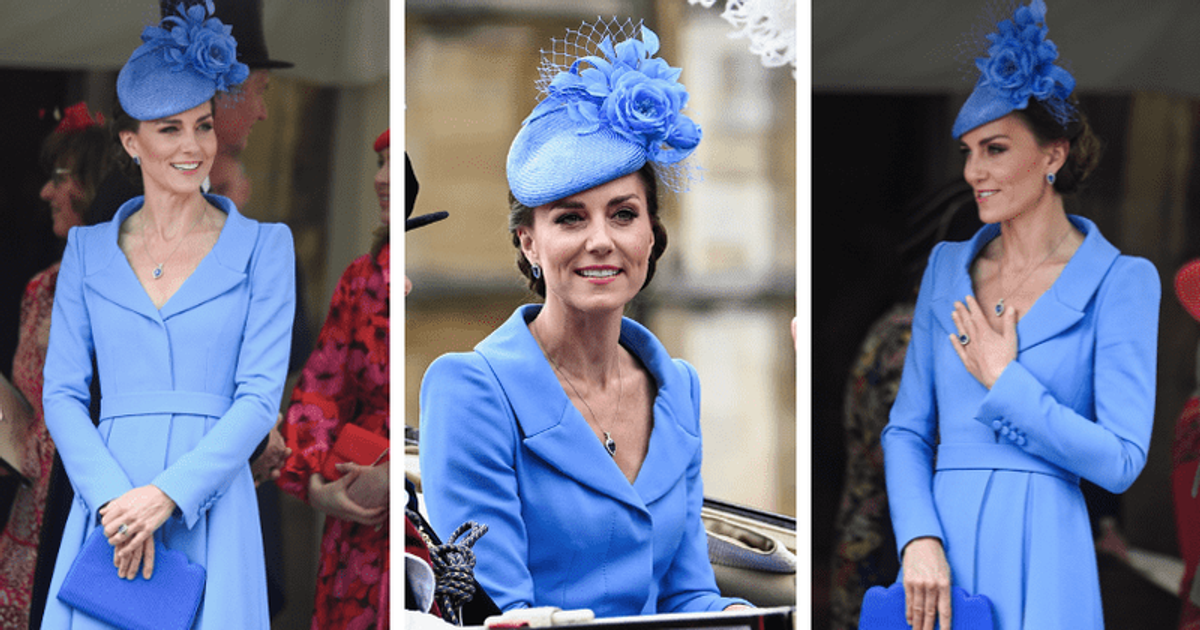 Kate Middleton made another flawless public appearance when she arrived at St George’s Chapel to attend the service for the Order of the Garter. For the occasion, the Duchess wore a periwinkle blue dress with a matching handbag and hat with a floral detail. The royal outing comes as reports say Prince William and Kate are set to move to Windsor from London with their three children this summer.

Garter Day is an annual tradition when the Knights of the Garter gather at Windsor Castle to take part in a series of events including a luncheon and service at St George’s Chapel. The old royal ceremony returned to Windsor Castle in all its traditional pageantry for the first time since 2019.

Check out the pictures below to see how gorgeous the Duchess looked:

The stylish royal wore her hair in an elegant updo and topped it off with a matching fascinator that appeared to be by Juliette Botterill Millinery. She tied the stunning ensemble with a tanzanite and diamond necklace and earrings by G. Collins & Sons. Tanzanite is quarried in the Manyara region of Tanzania in Africa. William and Kate have special memories of Africa as they got engaged while on holiday in Kenya.

Kate appeared to be in good spirits – she was smiling broadly as she was driven from Windsor Castle to nearby St George’s Chapel in a car she shared with Sophie. Other royals at the ceremony included Prince William, Prince Charles and Camilla, Duchess of Cornwall. Kate was also seen smiling and chatting with Camilla, who she shared the horse-drawn carriage with as she left St George’s Chapel.

Prince William wore a Garter Knight ensemble consisting of a navy velvet robe and black velvet hat with white feathers – as is customary at the ceremony. Kate had made her royal debut at the event in 2008 when she and William were still together. William also received his Order of the Garter Knighthood that year.

The Order of the Garter is Britain’s oldest and most prestigious chivalric order, admitted to its ranks only as a personal gift from the monarch. The Knights of the Garter include members of the royal family as well as 24 knights chosen from among those who have made a significant contribution to national life. Prince Charles, Prince William, Prince Edward and Prince Andrew are among the male members of the royal family to wear the garter.

The Knights and Companions of the Order of the Garter wore the traditional Tudor bonnets and long blue velvet cloaks fastened with heraldic chains.

In a good mood