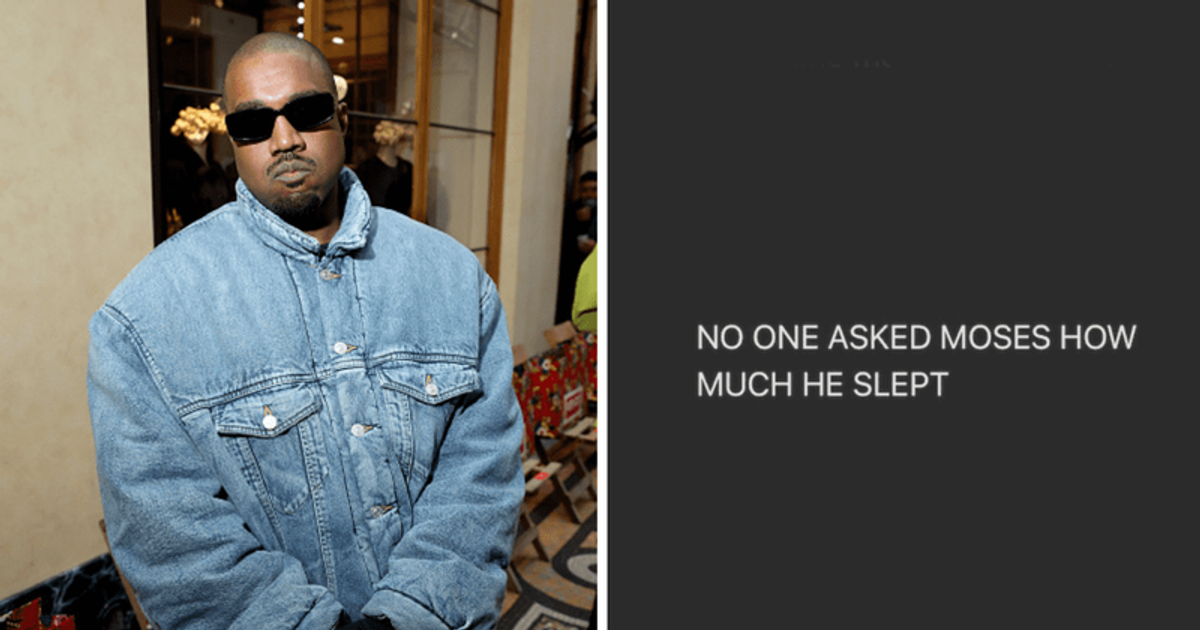 ATLANTA, GEORGIA: Rapper Kanye West dreamed up a suspicious Instagram story on Sunday, September 18, in which he compared himself to Moses in the Bible. He also raised concerns about his lack of sleep in the Instagram story, which only had a single line.

He wrote on his social media profile: “No one has asked Moses how much he slept.” His Insta story was written in white type on a plain black background, similar to many of his posts in recent weeks. Kanye initially posted a version of the text with a typo, deleted it, and then reposted it after correcting it.

Moses is considered an important figure in the Holy Bible. He is one of the most important prophets of Judaism and one of the most important prophets of Christianity, Islam and the Druze faith. Moses was also the leader of the Israelites and a lawgiver. According to the DailyMail, Kanye has been open about his struggles dealing with bipolar disorder. However, in a recent episode of the Alo Mindful podcast, Kanye explained his relationship with his children, claiming, “So even today I’m going to give Kim advice on things that can help because that’s going to benefit the kids. She’s still 80 percent raising those kids.”

He then added, “You know, you get to a point, and every time you get to that point, everyone wants to say, ‘Oh, it’s mental health,’ and everyone wants you to say a million apologies.” The rapper added, “Because everyone wants everyone so doped, so controlled, that you can’t even vouch for the things you give to your family.

He continued by declaring, “The idea of ​​taking control and opinions away from mom or dad or anything takes away meaning in someone’s life,” emphasizing, “Your home is your original church.”

The rapper also said he’s never read a book in his life. “I haven’t actually finished a book,” he said. “For me, reading is like eating Brussels sprouts. And talking is like eating Giorgio Baldi’s corn ravioli.”

He also explained the importance of mental health: “People are ashamed of the concept of mental health. It is the lowest form of discrimination. Even a crazy person can call you crazy. It’s an interesting weight to carry. It’s like a mark of the beast on my ego.” The 45-year-old then explained, “I’m best at doing something crazy, but when a random person on the street says, ‘That was crazy’, I feel a bit like shit.” He finished by saying, “It hurts as a person, it hurts my feelings.

The Kim Kanye duo began dating in 2012 and eventually wed in a lavish wedding ceremony in Italy in 2014. Although the couple was considered iconic, it hasn’t stood the test of time. So, after seven years of marriage, Kim filed for divorce from the Grammy-winning singer over “irreconcilable differences.” The rapper and reality TV star parted ways in March 2022.