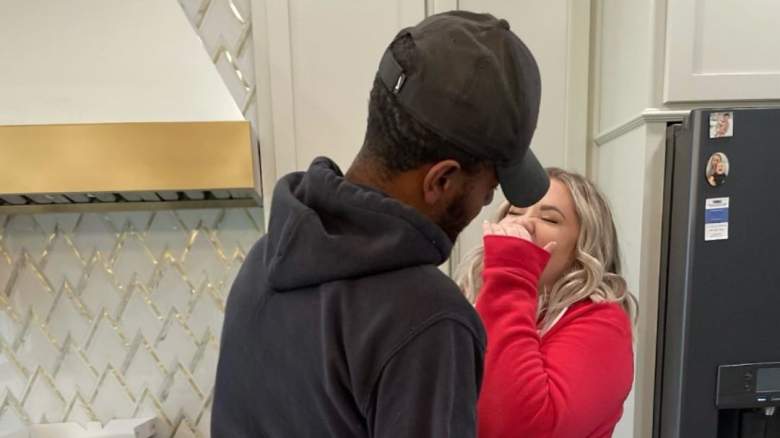 Fans took footage of Lowry’s videos and shared them on Reddit, where fans noticed that Lowry had blurred a detail on Scott’s hip. She previously said she faded Scott’s work logo on his sweatshirt so people on the internet wouldn’t know where he worked, but some keen-eyed fans claimed Lowry also tried to conceal a gun on Scott’s hip.

“The fact that she defaced his gun is also ridiculous. Can’t wait for this to lead to another unwanted pregnancy lol,” they said.

“Out of the hundreds of pictures and videos she has probably taken of this guy, all she has to do is post the one with a gun,” they wrote.

In this shot of them in their kitchen, did she smear a gun on his hip? You live in a nice neighborhood why do you have to be strapped in your kitchen sir?” a third person noted.

Lowry expressed her adoration for Scott on the June 21 episode of the podcast, Baby Mamas No Drama, with co-host Vee Rivera.

“Baby ‘Lijie. I love him so much,” Lowry said. “I have to brag about him for a second because he works his shit.”

Lowry noted that her ex-boyfriend, Jo Rivera, who is now married to her co-host, didn’t count. “Obviously Jo is different because I was with him when we were babies,” she said, and Rivera agreed.

“But he’s been busting his ass all damn week and you know what that man did this weekend? On Saturdays and Sundays he set his alarm for 6 a.m. to do chores outside,” she told Rivera. “And I’m just wondering, where are you from?”

Scott is ready to take things to the next level with Lowry, but the Teen Mom graduate is reluctant to meet his mom.

Lowry said she’s afraid his mother won’t approve of her.

“I don’t know what it is, but I don’t want to explain myself and I’m sure that – and maybe that’s a projection – as I know as a mother, she didn’t want him to be with someone that has four children “, she said.

“She can see my whole life and all my mistakes on TV. She can’t want that for her son, especially because he’s such a good guy,” Lowry said.

“If we don’t end up together, he’s such a good guy that I definitely want what’s best for him and I hope his mom sees that part of it,” she continued. “But it’s really scary to think about.”