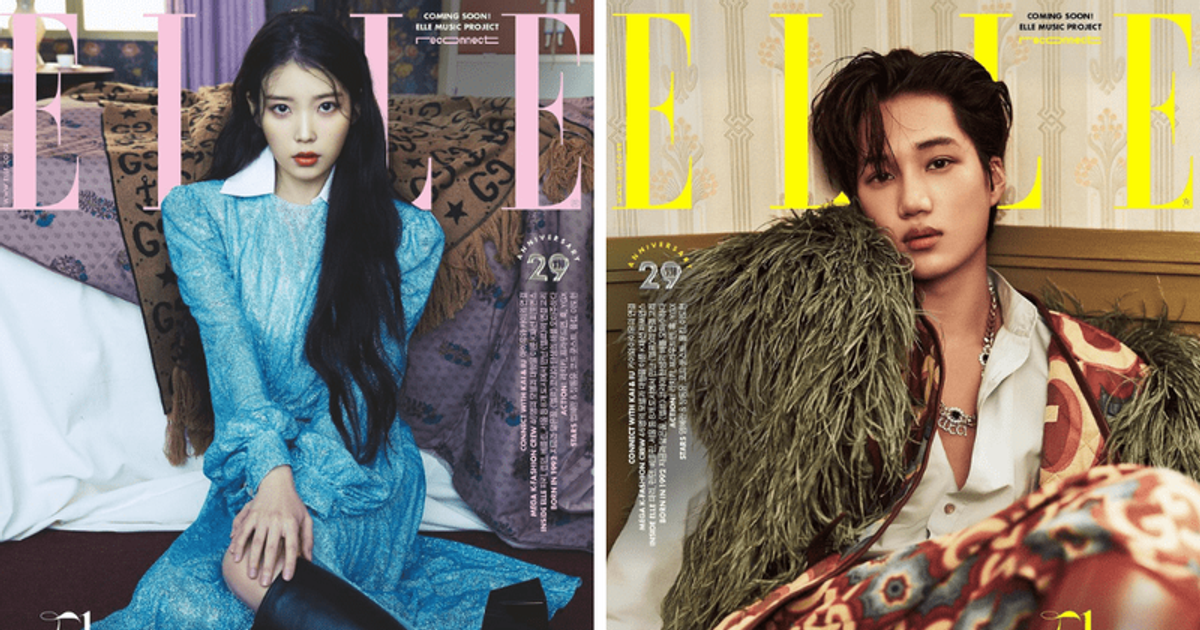 Looks like Elle Magazine is going all out for its November issue. They brought the K-Pop idols IU and Kai from EXO on board to be on the covers. Both will have three covers each, which means there will be six versions of the November issue. As brand ambassadors for the luxury fashion house Gucci, IU and Kai also present their latest collections for the photo shoots. This isn’t the first time two idols have worked together as they previously modeled together for athleisure brand Blackyak.

With the November issue, which also celebrates Elle’s 29th birthday, they also unveiled a project that will make fans wonder what to expect. Under the title “Elle Music Project: Reconnect” the fans think that it is a kind of collaboration between the soloist and the EXO member. On last year’s ‘Reconnect’ project, the single ‘For the Gone’ was produced by Code Kunst, Simon Dominic and Jannabis Jung-hoon, while actors wanted by Elle were featured in the music video. And the fans hope that something similar will happen for IU and Kai.

For the November covers, IU wore outfits from the ‘Hacker Project’, a sporty look, and an elegant, glittering suit from the joint collection ‘Gucci Aria Collection’ by Gucci and Balenciaga. She also embodied the sequined blue dress from the ‘Aria Collection’, which accentuates her doll-like features. In the sneak peek of her interview, IU spoke about her upcoming single “Strawberry Moon”. She shared, “I want to make a simple song. I want it to be a song that doesn’t make anyone think / sad when they hear it. I hope this single can be enjoyed in a very pleasant way. “

Kai from IU and EXO on the covers of Elle Korea

The two idols also shared their thoughts on how to convey emotions with songs. IU stated: “It is the most valuable decoration that cannot be replaced by anything else. That makes me a bit more humble and more objective. ”Kai added:“ It’s more fun to arouse the different thoughts of the audience than to throw out a clear concept. Either way, the interpretation is yours. I want to become an artist who gives people a new perspective. ”The magazine issues and the entire interview will appear in November.

Excited fans have trumpeted phrases like Gucci, Elle Korea, Kai’s real name Kim Jongin, and “IU For Elle Korea” to hype the releases. IU fans made posts like: “Hell! Ma’am, I think the new job at IU is MODELING. “And” IU the women you became this year are so * fire *. “

An EXO-L tweeted: “THIS IS A MASTERPIECE KIM JONGIN, YOU ARE INSANE FOR THIS. Another added, “The details, his face, the accessories, his golden skin … Kim Jongin, I get lost in words to describe you all over again …” One shared, “Gucci global ambassador Kai is the one most beautiful man ever. “

Multifans were also thrilled when they tweeted like “OMG !!! I don’t want to get my hopes up, but are we going to get a Kai x IU collaboration for Elle? OMG! “Another said:” KAI AND IU FOR THE NOVEMBER COVER FROM ELLE KOREA THESE TWO ALWAYS LOOK. “” #KAI X #IU serves you all! And which Elle Music Project? We get from these two too a song collaboration, ”said one fan.