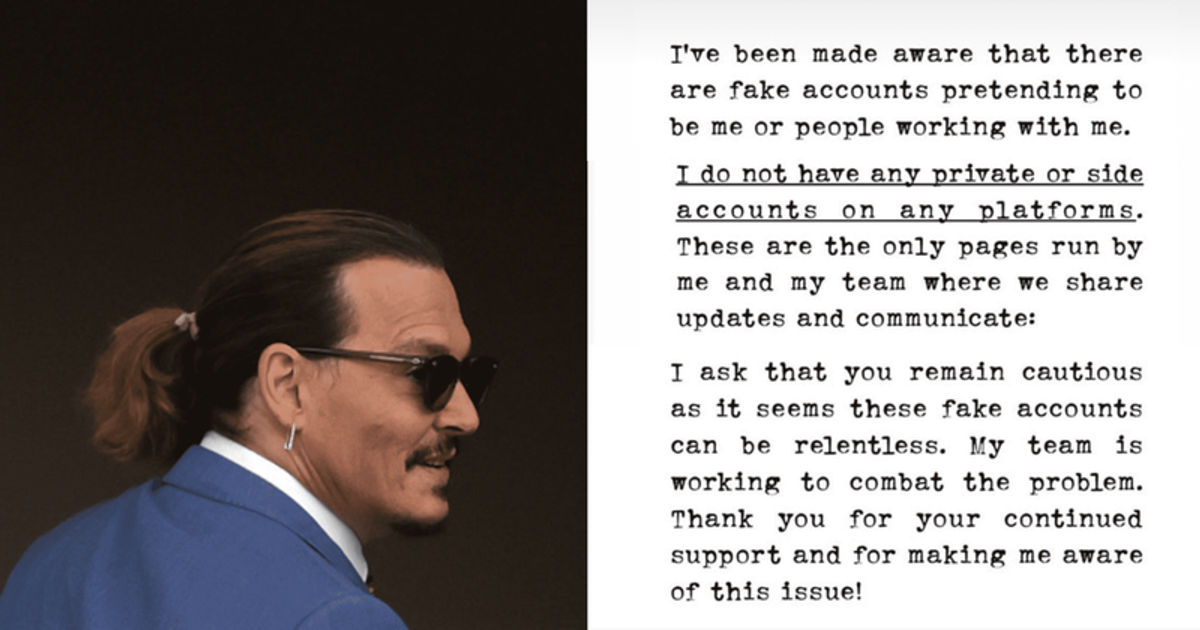 “I urge you to remain cautious as these fake accounts can be seemingly relentless. My team is working to combat the issue,” Depp wrote

Depp has received massive public attention and scrutiny amid the defamation trial between himself and his former wife Amber Heard, which ended this month. The jury ruled in his favor after finding that the Washington Post op-ed Heard penned about Depp was defamatory.

“I have been made aware that there are fake accounts pretending to be me or people working with me. I do not have personal or secondary accounts on any platform. These are the only pages run by me and my team where we share updates and communicate: INSTAGRAM @johnnydepp TIKTOK @johnnydepp FACEBOOK @johnnydepp DISCORD @johnnydepp0854,” Depp wrote on his Instagram Story.

“I urge you to remain cautious as these fake accounts can appear to be relentless. My team is working to combat the problem. Thank you for your continued support and for letting me know, love and respect! JD,” he concluded. One user wrote: “Johnny Depp sends an important message to be vigilant and cautious about fake accounts. Johnny Depp in particular is not on Twitter.”

Another said: “Please note Johnny Depp does not have a Twitter account. Mr Depp has been alerted to the ‘fake’ accounts using his name on multiple social media platforms and posted this via his verified Instagram account. PSA: Please report/block all ‘fake’ accounts.” A third added: “Johnny Depp is going through his story today. In short, he talks about not having a personal account other than the one that everyone knows and everyone should beware of those creating fake accounts in their name.”

Depp has garnered massive support from his fans around the world, particularly the reaction he saw while performing on Jeff Beck’s UK tour after the sentencing. The ‘Pirates of Caribbean’ star recently joined TikTok to thank fans for their unwavering loyalty and has garnered more than 15 million followers on the popular platform in less than two weeks.

“To all of my most valued, loyal and unwavering supporters. We’ve been everywhere together, we’ve seen everything together. We walked the same path together. we will all move forward together. You are my employers as always and once again I’m limited to not saying thank you in any way other than just saying thank you,” he captioned his first post on TikTok. The same video has 36.5 million views on Instagram.