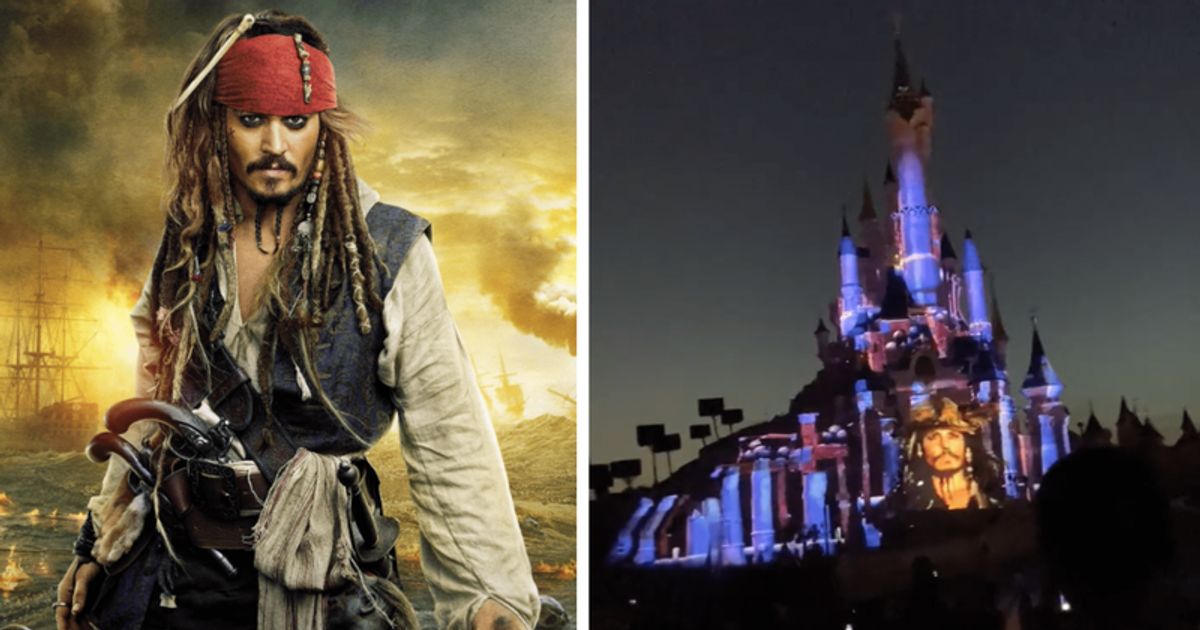 Johnny Depp fans want Disney to apologize after the 59-year-old actor’s face was used during a light show at Disneyland in Paris, France. A video from the Pirates of the Caribbean light show that took place over the weekend went viral. A clip of Depp in his iconic role, Captain Jack Sparrow, surfaced during the show.

Fans are outraged by Disney for using Depp’s portrayal of the character on their shows after he was dropped from the Pirates franchise after his former wife Amber Heard claimed the actor was abusive. The high-profile defamation trial between Depp and Heard ended on June 1, with the verdict largely in Depp’s favour. He was awarded $15 million in damages after the jury found Heard’s statements against him libelous.

Depp’s former talent agent Christian Carino testified on the witness stand that the 36-year-old actress’ defamatory allegations cost him the job of playing Captain Jack Sparrow in the sixth installment of the Pirates franchise. When Heard’s attorney asked Carino if Depp had lost any film roles since working for the actor, he replied, “I would say yes. The Next Pirate Movie.” He added that the reasons weren’t explicitly stated, but everyone knew.

In his statement, Depp said he felt “betrayed” by Disney. “After adding a lot of myself, a lot of my own rewriting, the dialogues, the scenes, the jokes, I didn’t quite understand, like after this long relationship and a pretty successful relationship with Disney, that… all of a sudden I was guilty, until proven innocent,” he revealed. Depp fans are outraged that Disney chose to use Depp’s portrayal of Sparrow after the actor won the trial and statements made against him were found to be defamatory.

One user tweeted: “So @Disney you fire the man over BS allegations but here you are using his face and voice for your visitors!!!! This is disgusting @Disney,” another said, “@Disney now you should apologize to Johnny Depp for y’all blowing up his picture ‘Jack Sparrow’ at Disneyland!!!” A third wrote, “Can’t believe that they have the cheek. Totally shash.”

A fourth fumed: “#JohnnyDeppWon when will @Disney apologize? [angry face emoji] Especially if they use his image profitably [angry face emoji].” A fifth said: “@Disney let us know if you need help finding these alpacas [llama emoji]I hope you are working on that apology letter as well.” A sixth said: “Shame on you Disney. You fired him, but you projected him on your castle yesterday! #johnnydepp #JohnnyDeppWon.”

One user wrote: “As #JohnnyDeppWon Disney has to publicly apologize. #DisneyShouldApologizeToJohnnyDepp,” another said, “He’s Jack Sparrow and the world loves him! As much as I do [red heart emoji] This… @Disney you should publicly apologize to this victim of defamation and abuse.” A third said: “All well and good but you have not YET humbly apologized to the man. That won’t make up for them dropping him and leaving him outside to dry when he needed your support and assistance. #JohnnyDeppWon #JohnnyDeppGotJustice.”

One user asked, “HOW DO YOU USE THIS MAN’S NAME BUT REFUSE TO APOLOGIZE TO HIM???” Another said, “It’s about time @Disney backed off and did the right thing. If you’re using Johnny Depp to keep selling merchandise and making $$$ money, you better apologize and give him his role back. Otherwise, you really are pure hypocrites. #justiceforJohnnyDepp #justiceforCaptainJackSparrow.” A third added, “@Disney a public apology would be better.”