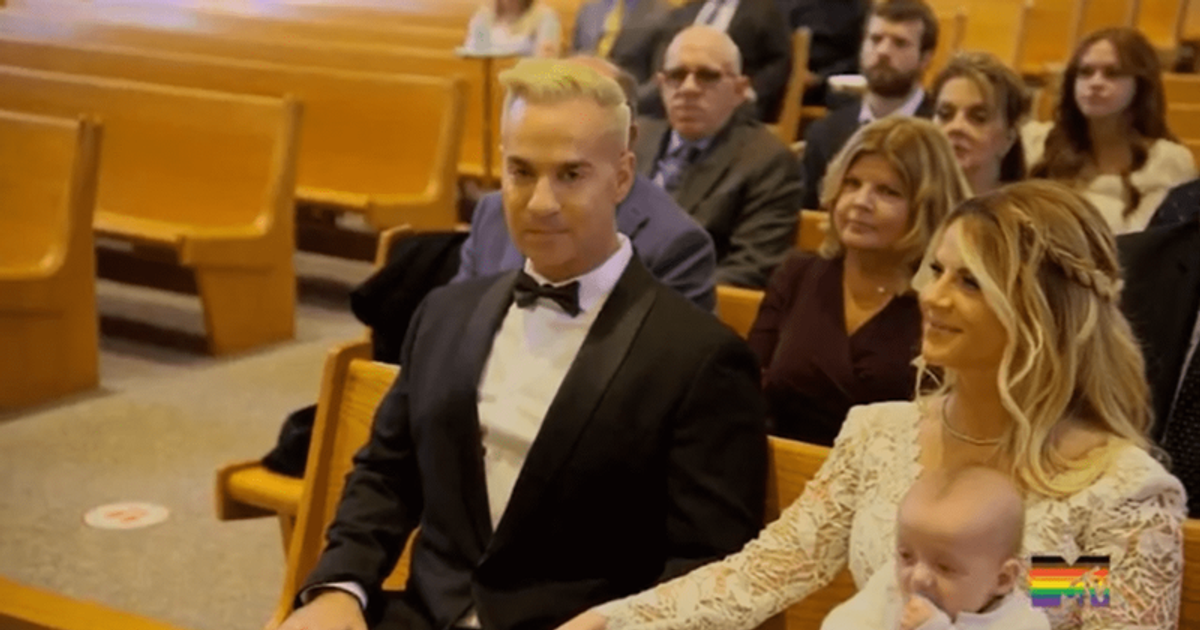 ‘Why and why!!!! Did Mike dye his hair blonde? he looks like Eminem #jerseyshorefamilyvacation,” one fan wrote

Episode 15 was titled “Livin’ La Vida Loca” and featured Mike and his wife Lauren celebrating the christening of their baby Romeo. The couple went completely nuts to celebrate their son’s special day. The christening was unlike any other on the show. Mike went blonde to accommodate the rest of his family and turned his son’s christening into a wedding celebration.

Jersey Shore: Family Vacation has returned with a brand new season and fans are over the moon. The show’s new season aired Thursday night, with Mike Sorrentino causing a stir at his own son’s christening.

‘Jersey Shore Family Vacation’ On MTV: Will Ronnie Ortiz-Magro Return To The Show In Season 6?

Despite Lauren’s objections, Mike enlists the help of two of his best friends, Vinny and Pauly, to help him with his hair. Pauly believes that Mike does not change his appearance very much, and when the opportunity arose to make some changes, they did not refuse. While Lauren enjoys a women’s day with Nikki Hall, the boys in the house dress up in Breaking Bad style to change Mike’s appearance. Vinny couldn’t help but compare him to “fat old Eminem” once they were done. Fans on social media couldn’t help but comment on Mike’s new look. One fan wrote: “Lol I actually like Mike’s blonde hair. #JerseyShoreFamilyVacation”.

Another fan was quick to call for a t-shirt with the slogan as his tweet read, “Blondes have more fun Cue a new t-shirt from @ItsTheSituation #JSFamilyVacation #jerseyshorefamilyvacation.”

Commenting on Mike’s hair, another fan wrote, “Mike’s new hair reminds me that all guys should have guy lights. facts. #jerseyshorefamilyvacation.”

However, one fan thought the blonde look actually made Mike look younger. They tweeted and said: “Why does @ItsTheSituation look oddly younger with blonde hair? @JerseyShore #Jerseyshore #jerseyshorefamilyvacation”.

Still, not everyone was on board with Mike’s transformation. One fan tweeted: “Now why did Mike dye his hair blonde #jerseyshorefamilyvacation #Jerseyshore”.

Another fan went on to compare him to Eminem: “Why and why!!!! Did Mike dye his hair blonde? He looks like Eminem #jerseyshorefamilyvacation”.

A viewer called out to Pauly for commenting on Mike’s hair: “Not only did Pauly say Mike’s hair never changes when it’s exactly the same #jerseyshorefamilyvacation”.

When the rest of the gang arrived for dinner after the baptism, they couldn’t help but take in the spectacle. Jenni “Jwoww” says Mike and Lauren are enjoying the “boom life” because of the decor since the couple’s events are like small weddings. Nikki informs Pauly that, like the Kardashians, a photo booth was set up at the party. She also mentions a balloon arch and how attendees should take their seat cards as soon as they enter the venue. After hearing all of this, Pauly describes Mike and Lauren as the “definition of over the top and almost too much”. When Mike showed off his new blonde hair, the other roommates had a lot to say. Deena refers to him as “slim shady” while Jenni refers to him as “Eminem having a midlife crisis”. However, she compliments Mike on the feast he arranged. In a confessional, Pauly also says that Mike never comes cheap when it comes to a decent dinner.

Jersey Shore: Family Vacation will return next Thursday at 8:00 p.m. ET on MTV with a new episode.