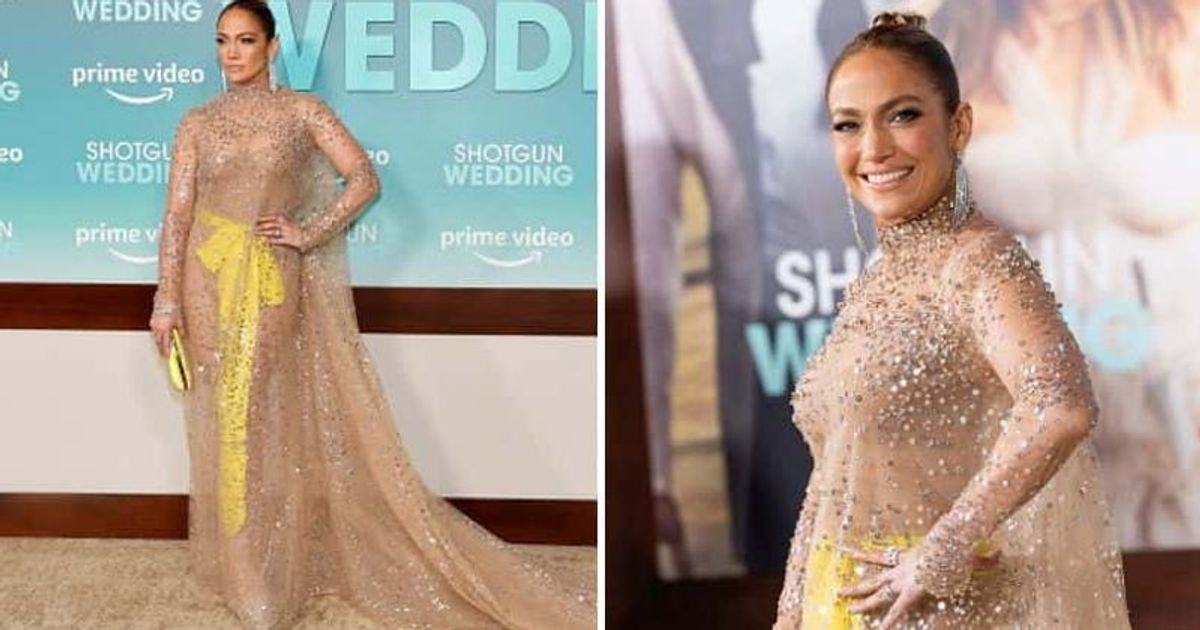 HOLLYWOOD, CALIFORNIA: Jennifer Lopez had all eyes on her as she delivered a stunning performance at the premiere of “Shotgun Wedding” at the TCL Chinese Theater in Hollywood on Wednesday, January 18. The 53-year-old entertainer looked stunning in a see-through dress. Its beige color created a subtle yet glamorous look, and the sheerness of the fabric complemented her toned figure. Jennifer shared the red carpet with Josh Duhamel, who looked sharp in a black suit. In the film, they portray a couple whose all-inclusive wedding is hijacked by thieves.

The pop star – who married Ben Affleck last year – looked like a pop diva as she posed for photos in her exquisite outfit. She wore flawless makeup and her golden brunette hair was pulled back in a sleek bun, which emphasized her radiant face. The addition of smoky eye shadow and vibrant lip gloss enhanced the overall look. She complemented her glitzy outfit with silver earrings dangling over her shoulders and a boxy yellow velor clutch.

Jennifer Coolidge also wowed in a form-fitting black dress that showed off her legs. The actress, who recently took home a Golden Globe for her performance in The White Lotus, sported long lashes, a fresh lip gloss and a head full of impeccably coiffed hair. She also showed off a stylish manicure and a variety of jewelry, including a set of luscious earrings. The outfit was completed and given a vintage glamor touch with a pair of black shoes.

Other celebrity attendees included Heidi Klum’s daughter Leni Klum, 18, and her father Seal, 59. The ‘Kissed By A Rose’ singer’s model daughter smiled widely as they posed together while sporting fire engine red nails and a tiny black one wore dress.

Amazon Prime has acquired the US distribution rights to the Lionsgate film, which will debut on January 27th. Jennifer Salke, head of Amazon Studios, said in April, “Packed with action, comedy and a dash of romance, Shotgun Wedding is one of those rare films that has something for everyone.” “With a cast led by Jennifer Lopez and Josh Duhamel, the film oozes star power and fantastic performances. We are thrilled to be working with the entire filmmaking team to bring this hilarious, multifaceted film to Prime Video audiences around the world,” she added.