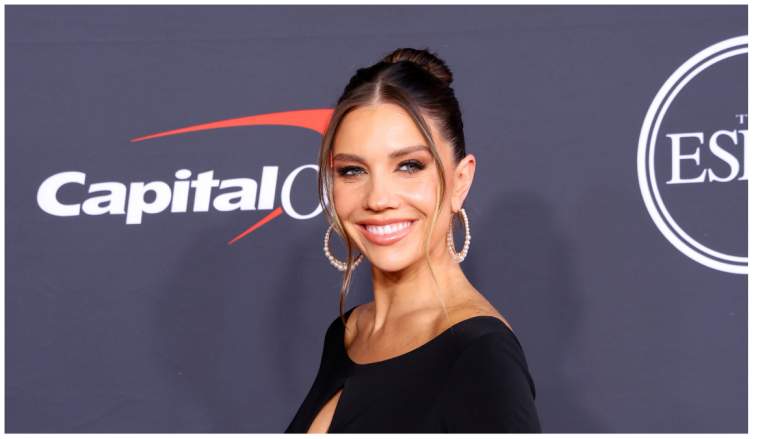 Jenna Johnson and Val Chmerkovskiy walked the red carpet for the first time since announcing they are expecting their first child, who is due in January.

In July 2022, 28-year-old Johnson announced that she found out she was pregnant after traveling to Mexico with her husband. “The shock and disbelief was insane,” the DWTS professional told People. “I couldn’t believe it because it wasn’t an easy road for us to get pregnant.”

“Everyone tells you, ‘If you just relax and don’t stress yourself, it will happen for you.’ That’s exactly what happened,” she told the outlet. “I think it was exactly how it should be. Our little baby was created with a lot of love. It all seems so magical and intentional.”

All eyes have been on the DWTS couple since their big announcement, and days later they met at a red carpet event that gave fans the latest look at Johnson’s pregnant belly.

On July 20, 2022, days after announcing their pregnancy news, Johnson and Chmerkovskiy showed up on the red carpet for the 2022 ESPY Awards outside the Dolby Theater in Los Angeles. In photos shared by news outlets, Johnson rocked her stomach while posing in a high-slit black peekaboo dress, while Chmerkovskiy wore a suit jacket and suit pants.

“When doesn’t she look good? Love her!” wrote one fan.

“She looks incredible! Glowing,” agreed another.

“Honey this girl knows how to dress,” wrote a third fan.

While sharing a red carpet moment with fans, Johnson and Chmerkovskiy remain silent about their baby’s gender. In an interview with Extra, the couple teased that they know the gender of their child but are keeping it to themselves for a while.

“We figured it out ourselves,” Johnson told the outlet. “And I love that it’s just the two of us knowing the gender, so … we’ll see when we’re ready to announce it.”

The mom-to-be also revealed that she was happy to finally have her baby news “out” and not hiding her pregnancy now that she’s advanced enough to feel safe sharing the news.

Ahead of her red carpet moment at the ESPY Awards, Johnson shared with fans the moment she found out she was pregnant.

In a video posted to her Instagram page, she captured the moment she was waiting for the results of a home pregnancy test. In the video, she gets emotional when she finds out she’s pregnant.

“The moment my whole world changed,” she captioned the video, adding, “We had actually stopped trying to get pregnant for about 6 months to give ourselves a break mentally/emotionally… such is the shock , the disbelief and sheer joy of that moment is a memory I will never forget.”