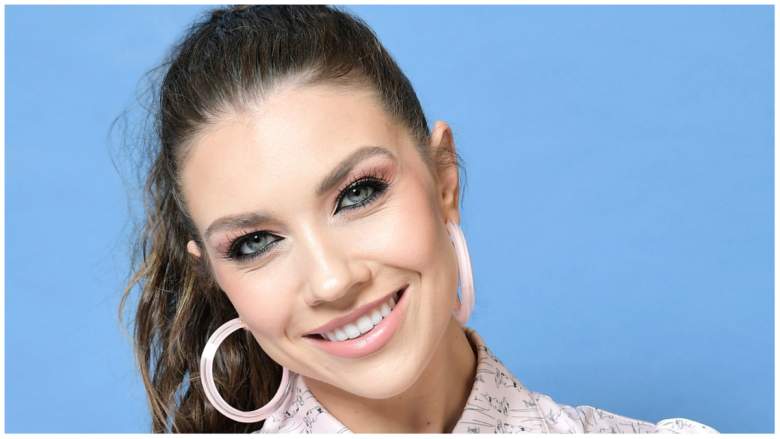 Jenna Johnson gave fans a new look at her pregnancy progress. The Dancing With the Stars pro and her husband Val Chmerkovskiy recently announced that they are expecting their first child in January.

The DWTS couple decided to keep some things private — for now. In an interview with Extra, Johnson teased that she and her husband already know the gender of their child but are keeping it to themselves for now. But the 28-year-old dancer admitted she was glad to finally have her baby news “out there” so she doesn’t have to hide her pregnancy anymore.

Now she’s out of hiding in a big way.

In a video shared on her Instagram page, Johnson shared a video montage of her pregnancy so far.

The mirrorball champion posted a mirror selfie rubbing her tummy, as well as a shot at the beach posing next to the dad-to-be on the sand. Johnson also shared an updated mirror selfie taken in her bedroom, where ultrasound images have been pasted onto a floor-length mirror. The entire clip was set to the Joji song “Glimpse of Us”.

“A little over 4 months with you,” Johnson captioned the sweet post.

Several fans then said the video was the “cutest” thing they’ve ever seen.

“There’s a little baby in there!!” wrote one fan. “The cutest bump ever. I’m so happy for you both!!” added another. “I’m having kids, that’s it,” chipped in another fan.

“What my stomach looks like after a typical football Sunday,” father-to-be Val said.

Johnson previously revealed that she welcomes the changes to her body and that her husband is particularly obsessed with it. “Every day when I look in the mirror and I get bigger and bigger, it just hits me what’s happening,” she told People in July 2022.

“Val is just so funny in this whole experience,” added the DWTS pro. “He’s obsessed with my body growing. He’s just obsessed with everything. The boobs, the butt, the stomach. Being so sweet and positive to my body just made me feel so beautiful.”

Johnson admitted she got cravings while eating for two. She told the outlet that she ate “galore,” and while many of her cravings were directed at fruit, she now feels a fondness for a typical pregnancy meal.

“I would say my craving is pickles,” Johnson admitted. “Seriously, I could pop a jar of pickles any time of the day and be so stoked.”