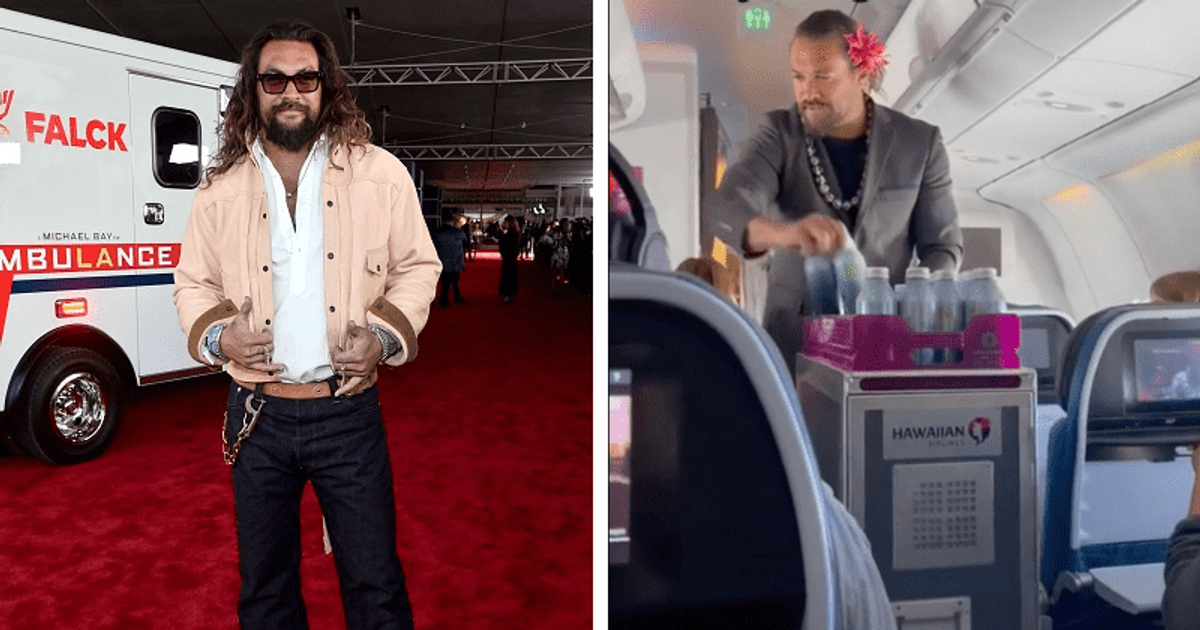 “Drink one, remove one – For every bottle of Mananalu sold, we remove one plastic bottle from the ocean,” Momo wrote

Jason Momoa acted out his superhero charms on Tuesday, August 2, after a video of him pouring water on a Hawaiian Airlines flight went viral on social media. The ‘Aquaman’ star, who recently turned 43, was pictured pouring Momoa’s sustainable Mananalu water while donning a gray suit, black crew-neck T-shirt and a bright pink flower in his hair.

Momoa’s first day as a cabin crew member was witnessed by the lucky passengers of a Hawaiian plane as he handed out bottles of his water, known as Mananalu, from a trolley. The video was posted on TikTok by Kylee Yoshikawa. “My aunt sent me this video, just thought I’d share it,” she commented on the video, which included an instrumental rendition of Disney’s Under the Sea. It has been viewed by 3.5 million users so far.

Many enthusiastic users commented on the video. One remarked, “I would hit my service button every 10 minutes,” while another referred to Momoa as “Aguaman,” a reference to a Spanish word for “water” and his role in the movie Aquaman. “His marketing team is awesome lol,” said one user.

Momoa later shared a behind-the-scenes video on Instagram in which he introduces himself to passengers as the plane’s “water master.” “Mahalo @hawaiianairlines for allowing me and my team to capture this special moment,” he wrote in the caption. “A dream becomes true. My idea to create @Mananalu.water came to me on a flight.”

“I’m grateful for your support and it’s an honor that Hawaiian Airlines is the first airline to partner with Mananalu. We are on a mission to end single-use plastic,” Momo wrote. “Drink one, remove one – For every bottle of Mananalu sold, we remove one plastic bottle from the ocean. We removed 3 MILLION plastic bottles from the ocean this year. Keep making waves to save our beautiful planet. aloha j “

Mamamalu water was created by Momoa, a passionate environmentalist who previously pursued his childhood dream of becoming a marine biologist. With the help of the Mananalu company, he will be able to fork out the equivalent of a “planet-damaging plastic bottle made from ocean litter” for every bottle of Mamamalu consumed. The Mananalu water bottles are made of aluminum and are designed to be reused many times.

Momoa’s role as a flight attendant comes at a time when a number of high profile celebrities have come under fire for using private planes to fly to different areas. Taylor Swift, Kylie Jenner and Travis Scott were named among the top 10 prominent carbon polluters in a report by PageSix, though Swift’s agent denied the allegations, claiming she rented her private jet.