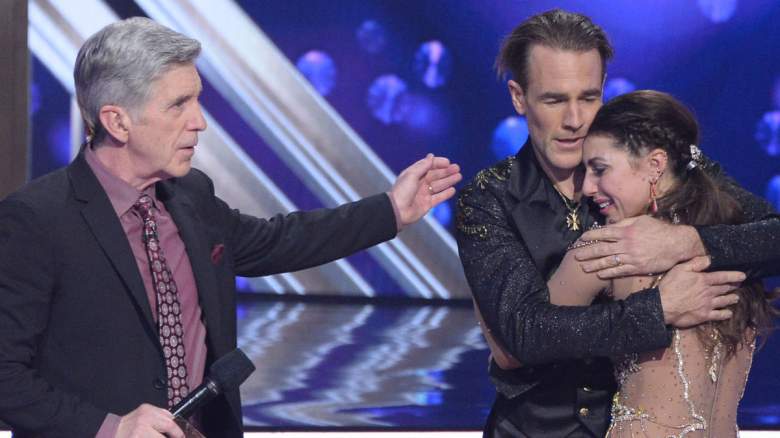 Dancing With the Stars Season 28 contestant James Van Der Beek recently got to thank host Tom Bergeron and his pro partner Emma Slater for what they’ve done for him this season.

In an Instagram Story, the “Dawson’s Creek” actor revealed that he had tried posting this message to Bergeron and Slater back in July 2020, but Instagram retracted the post.

“Instagram removed this post two and a half years ago and just told me today that they’ve decided to allow it…” Van Der Beek writes on his Instagram Stories. “Warning: Might make you cry. And want to dance.”

On her Instagram Stories, Slater reposted the pair’s role with some heart emojis.

In the caption on the reel, Van Der Beek thanks Slater, Bergeron and the show in general, and writes about how wonderfully the show has treated him and his mother.

The video features his contemporary routine with Slater on Journey’s song “Don’t Stop B Believe.”

In the video, Van Der Beek explained what the song means to him, saying, “’Don’t Stop Believing’ reminds me of the support I received from my parents because this song is about his Follow hearts and don’t give up. … My parents never gave up on me.”

“Thank God for my parents,” he told Slater, adding, “I don’t know what made my parents keep believing in me, but I couldn’t have done it without their support.”

In the caption, he wrote about how he thought his mother would die before his time on Dancing With the Stars, and he’s so grateful to the show for the moments they had together during this episode.

He added: “And a very special thank you to @tombergeron for something you don’t see on camera: when he looked over and saw my mum crying in the audience, he placed a gentle hand on my back and nudged me to walk over to.” you. I’m SO glad he did. The gift of this moment will always make me smile, even through tears. Not only are he and @erinandrews true professionals, they brought #DancingWithTheStars to life with a level of heart that was so appreciated in the eye of this wild live storm.”

Van Der Beek’s mother Melinda died in July 2020 at the age of 70. At the time, he posted a series of photos of her to Instagram, some of which were taken in the “Dancing With the Stars” ballroom, and wrote that it was still a huge shock to lose her.

“Even though we knew this was coming – and actually thought we were finished almost a year and a half ago – I’m still in shock. I’m thankful that she’s no longer in pain, I’m sad, I’m angry, I’m relieved… all at once and in different moments. I’m just trying to keep space and allow everything,” wrote Van Der Beek.

He continued: “She was my mother. She gave me life. She taught me how to trip. Driven me to my first auditions. She believed in me based on her own intuition and passed on a madness that has been critical to not only my success but my personal happiness. I don’t know what the grieving/healing process looks like or feels like from now on… all I know is whenever my kids – or any of their students – want to dress up or go on a stage or dance or even just think to them… they will have a little more love from the other side that supports them.”

In another tragedy that happened to Van Der Beek this season, he was eliminated the night after his wife miscarried their unborn son. On the one-year anniversary of the loss, he paid tribute to Slater, Dancing With the Stars judges and fellow contestant Ally Brooke, who wanted to give Van Der Beek her spot in the finals once she found him out about what he was going through.

He also said he felt his unborn son gave him the “grace” to get through this moment.

“That might sound crazy to some…but I feel like that was his gift to me. That was one of the things that brought his soul here: He gave me access to grace. And I share that because we all go through something – and for many of us it’s a lot worse than a celebrity dance show – but the mystics speak of the healing being IN the disease… and whether that’s true in every situation or not, on behalf of the son that I will always carry only in my heart…I invite all of us to the possibility that it could just be that way,” Van Der Beek wrote.