Isabelle Charters: Meghan Markle’s Windsor fan who called the Duchess ‘beautiful’ denies she was paid to be nice 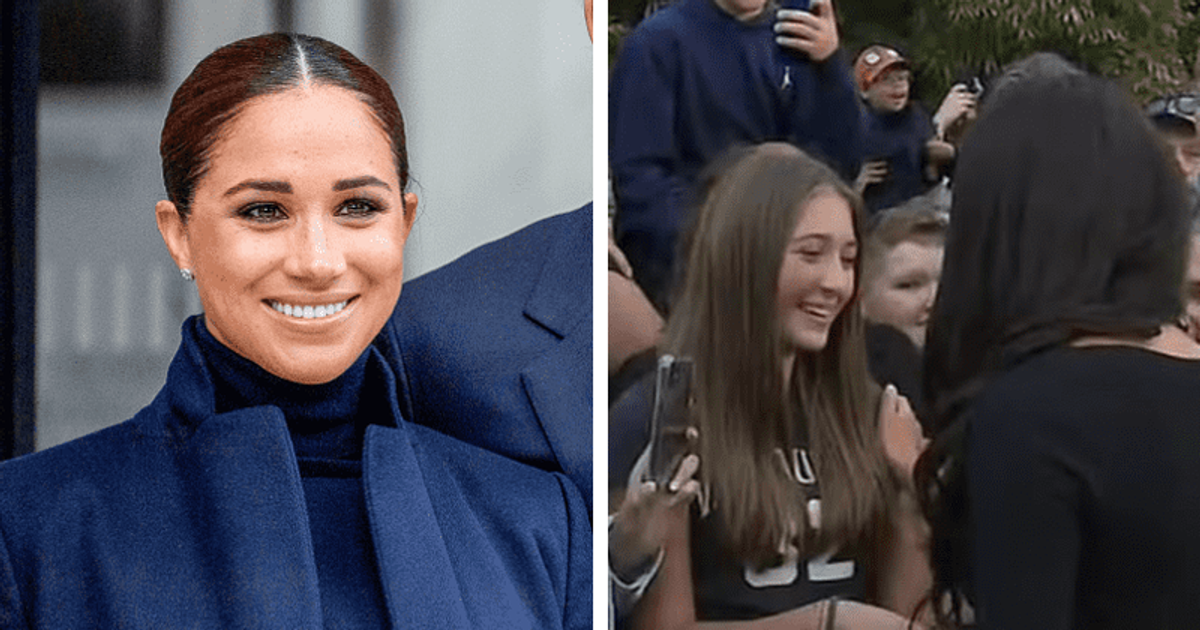 LONDON, UNITED KINGDOM: Meghan Markle had an unexpected “good PR” moment as she inspected honors and met with the congregation outside Windsor Castle on Saturday September 10. A young woman approached her and told her she was “beautiful” and “real” and also recorded a video of her hugging the 14-year-old girl next to her. Their brief but subtle interaction was captured on video that went viral on the internet.

But now the internet is casting doubt, wondering if the moment was faked by Meghan’s PR team to give the Duchess some much-needed “good publicity”. Conspiracy theorists claim the young woman was a plant in the crowd and was paid to be nice to Meghan. The woman in question, Isabelle Charters, 25, who is from Windsor, has denied the sickening claims and insisted she was very excited to meet Meghan. She shot a video as Prince Harry and Meghan arrived, showing the girl next to her in the crowd, Amelka Zak, 14, hugging Meghan.

Isabelle posted a video of her own on her TikTok account of this sweet meet, capturing the moment the Duchess hugged Amelka before speaking to Meghan herself, calling her “so beautiful”. The video has already reached more than 30 million views on the app.

Isabelle Charter waited with her father, brother and boyfriend with other mourners on Windsor’s Long Walk, while Meghan and Harry greeted some as they walked down the path.

Many controversies came to light after she posted this video, which went viral. Some said she was placed right there by the Sussexes’ team for Meghan to see and get close to. There have been other claims speculating that Isabelle and Meghan are old friends from the Invictus Games. Some even falsely accused Charters of being Amelka’s mother. Isabelle was reportedly shocked to learn she was being accused on social media of being paid by Meghan Markle’s PR team to be there.

“This interaction was really up close and personal. The girl next to me ended up hugging Meghan and a lot of fake stories have emerged from this video. I’m only here to clean up. I’m the girl in the denim jacket that’s standing next to the girl that’s hugging Meghan, girl that’s like, ‘Oh my god. You are literally so beautiful. Now for the context. I’ve actually lived in Windsor all my life. I was in Windsor that day with my father, my brother and my friend. It may shock you, but I never met the girl next to me who hugged Meghan. I am not in a relationship with this girl. I am not affiliated with her. Coincidentally, we were standing next to each other in the crowd. We were total strangers. However, we agreed that we were both very excited to see Meghan. We didn’t originally know she would be there. At first it was just William and Kate. So when they said Meghan and Harry were coming, I think of the people around us, we were the two who were the most excited about it,” she told CNN of the heartfelt moment.

One lady, @_Genevieves_, posted a picture on Twitter and asked, “Can anyone help me understand this? The same woman, but it looked spontaneous. How were they supposed to know MM was there since it was spontaneous? was her daughter hugging MM and telling her “You are so beautiful” so this was clearly set up.

Isabelle denied the claims, telling CNN: “So this is where things get crazy. I’ve seen videos and articles saying I’m the mother of this girl and paid Meghan’s PR team to have me there. I was planted in this place. .. that I knew Meghan from before the Invictus Games”

She concluded her reasoning by saying: “So ultimately I wanted to show that the experience and interaction we had with Meghan was really beautiful and genuine and she was so nice to us, even though it was short it was very cute and don’t believe everything you read online.”