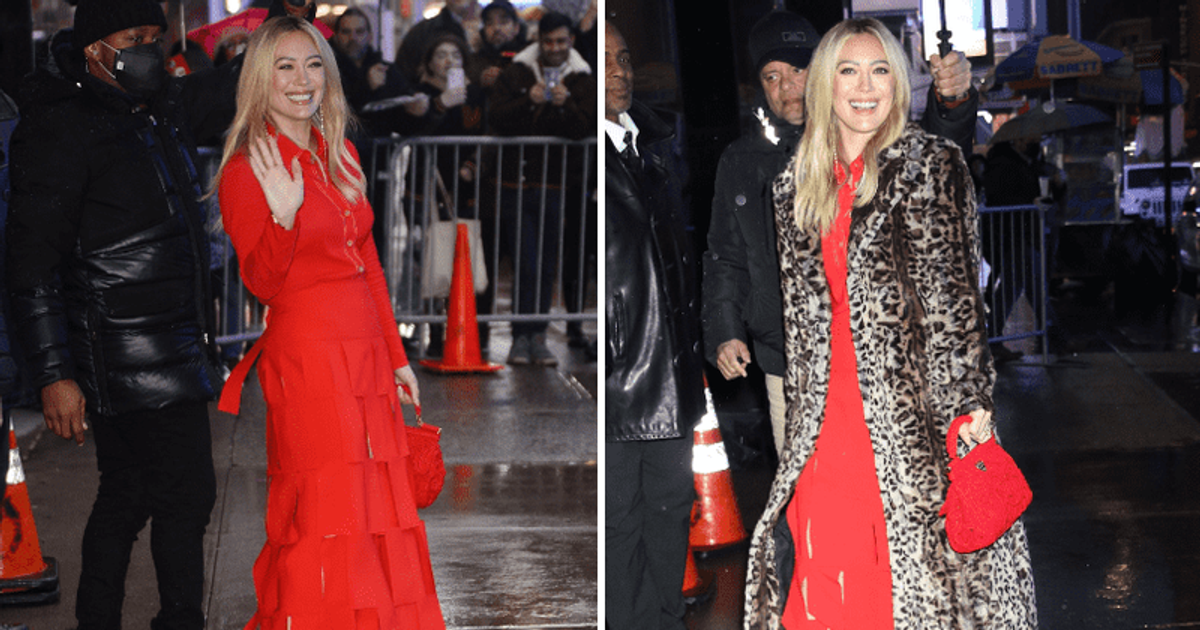 NEW YORK CITY, NEW YORK: Hilary Duff looked stunning as she headed to an interview with ‘Good Morning America’ in New York City on January 23. The actress was on her way to talk about her Emmy-winning sitcom How I Met Your Father, which premieres Jan. 24 on Hulu. She plays the role of Sophie in the comedy about a group of single friends in New York.

The 35-year-old actress appeared for a chat with ‘GMA’ host Lara Spencer and looked lovely while clad in an ankle-length leopard print coat over a red skirt and blouse. Hilary wore a tomato red button-down shirt by AWAKE Mode, a multi-rectangle skirt and black Stuart Weitzman heeled sandals. She also carried a matching red handbag to complete the look.

“Sophie is … she’s just looking for love in the modern world of dating, which is so difficult for so many, especially her, but she never gives up,” she said of her character, who has a romance with love interest Jesse, played by Christopher Lowell. “Season two starts with just trying again. And then she gets involved in some tangles that start with some little white lies that turn into bigger lies and she’s in a big snowball of lies and it was a lot of fun to play.”

The series is the spin-off of the legendary How I Met Your Mother, which aired for nine years before ending in 2014. Cobie Smulders, who portrayed Robin Scherbatsky in the original series, had a cameo of ‘HIMYF’ towards the end of season one, much to the delight of fans, and Hilary teased that there will be more of the same in the future. “I think I could lose my job if I tell you who, but we have a special guest from the original cast coming this season, and it was a dream come true to work on the set that day,” he said her, before adding, “I think our dream would be for everyone from the entire cast to come through at some point.”

According to the Daily Mail, the ‘Lizzie Maguire’ actress has admitted she relies on her husband Matthew Koma, who is a huge ‘HIMYM’ fan, to help her research her scripts for references to the original. “If I’m reading a script and I don’t understand something and I’m like, ‘Is that a joke from the original?’ He says, “Yes, Hilary, it’s a joke from the original. How come you don’t know?” and he’ll tell me how to say it or what a big moment those words were or whatever else happens from How I Met Your Mother,” she said.

“I think it’s actually more hidden than we know because we do a lot of flashbacks and flashforwards and then sometimes we have to go back and reshoot something because we go think this is a moment where something might creep in I, we will end at the end of the show revealing all the connections,” she added.