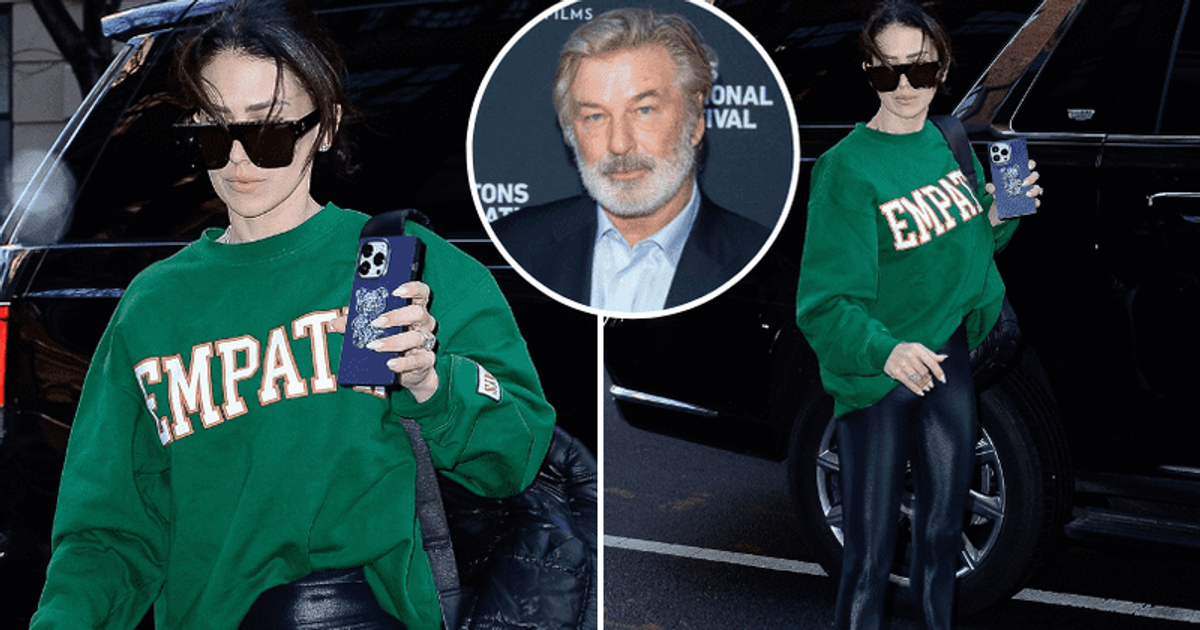 NEW YORK CITY, NEW YORK: Hilaria Baldwin appeared in public wearing a sweatshirt emblazoned with the word “empathy,” a day after it was announced that her husband Alec Baldwin will be charged in the October 2021 shooting of “Rust.” Cinematographer Halyna Hutchins.

The 39-year-old yoga teacher was spotted in New York City on Friday, January 20, wearing what appeared to be a green crew-neck sweatshirt from Mayfair Group with the slogan in bold white letters. She paired it with dark oversized sunglasses, beaded slides and some latex leggings.

‘Two Scams’: Internet trolls Hilaria Baldwin for saying she and Meghan Markle have a ‘common humanity’

According to the New York Post, Hilaria’s presence appeared to be a ploy to distract reporters who had gathered outside her and Alec’s Greenwich Village home. When she appeared, she reportedly directed the crowd to gather around her and announced she would be making a statement. Alec is said to have slipped from a side entrance to a waiting van. “I’ll only say it once. I will tell you what I want to say. I want you guys to realize that we have seven children,” Hilaria said of Alec allegedly making his escape.

“You are here [when I have to] escorting them to school and when they come home – is not good,” Hilaria said. “On a human level, you know I’m not going to tell you anything. You know that. So please leave my family alone. And let it all play out. OK? So let my kids come home and you stay away from them. Because they ask me, ‘Mom, what are these people doing?’ And it’s a very difficult thing to try to explain as a mother. So please go home. I won’t say anything and Alec won’t say anything.”

‘Rust’ actor Alec Baldwin, 64, and armorer Hannah Gutierrez-Reed, 25, were charged with involuntary manslaughter on January 19, 15 months after former camerawoman Halyna Hutchins, 42, was fatally shot. Those charges, according to Baldwin’s attorney Luka Nikas, “distort the tragic death of Halyna Hutchins,” and he echoed his client’s earlier objections, claiming that the actor’s staff “assured him the gun had no live rounds.” He added that the charges against the actor were “a terrible miscarriage of justice.” “We will fight these charges and we will win,” the lawyer said, according to the Daily Mail.

Gutierrez-Reed vowed to challenge the allegations as well. “Hannah is and always has been very emotional and saddened by this tragic accident. But she didn’t commit involuntary manslaughter. These allegations are the result of a very flawed investigation and an inaccurate understanding of the full facts. We intend to bring her to the full truth and believe that Hannah will be cleared of wrongdoing by a jury,” her attorneys said.