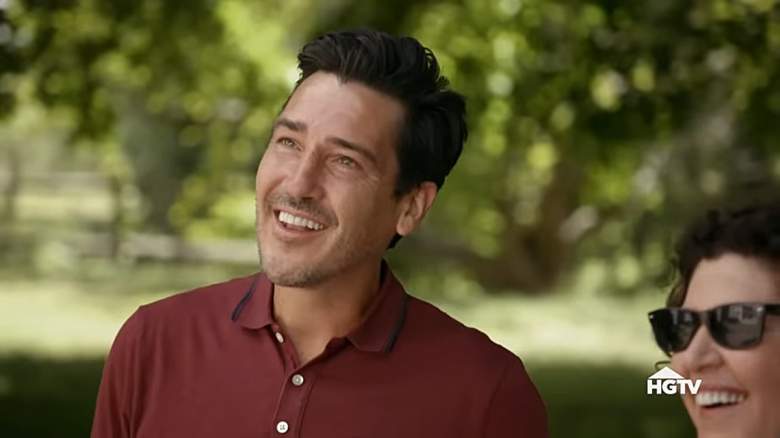 Before he went to bed on Oct. 11, 2022, HGTV host — and New Kids on the Block member — Jonathan Knight took some time to talk about his coming out. The Farmhouse Fixer host didn’t want to end National Coming Out Day without giving his two cents on the importance of authenticity and inclusivity.

National Coming Out Day was first observed by the Human Rights Campaign in 1988 to commemorate the anniversary of the National March on Washington for Lesbian and Gay Rights. The organization says the purpose of the annual observance is “to promote a safe, inclusive, and loving world where LGBTQ+ people can live truthfully, openly, and without fear.”

Knight, who confirmed in August that he married his longtime love Harley Rodriguez, wrote on Twitter at the end of the day: “On this #nationalcomingoutday I go to bed knowing the struggles that so many face. My life changed when I was able to live my authentic life! Come out feeling ready knowing that life is about to get SO MUCH BETTER!! There is so much support and love out there. You are not alone!”

Fans flooded Knight’s post with powerful replies; Many thanked him for being such a positive role model for many LGBTQ+ fans and also for helping to shift public perception towards acceptance and inclusion.

One person wrote: “Years ago I tweeted about a young man whose family is like family! He lived with his father who kicked him out when he told him when he was 16! Jon you sent me a message to make sure this kid is okay, you wanted to reach him! I will always remember that! You’re unbelievable”

Another commented: “So happy you came out. Seeing you with Harley changed my perspective on gay marriage. I raised to see it in a way that I now see is wrong. People living their authentic lives have taught me so much. Praying that everyone can start living an authentic life!”

“Thank you so much. I’ve struggled with my queer identity and knowing I’m not alone helps,” wrote another fan. “That’s why representation matters.”

Knight rose to stardom in the ’80s as one-fifth of the hugely popular boy band New Kids on the Block. It was big news in January 2011 when he confirmed he was gay after Tiffany, a fellow ’80s pop star who many thought had “outed” Knight, appeared on television.

During her appearance on Bravo’s “Watch What Happens Live,” Tiffany was asked if she dated members of New Kids on the Block while on tour with them.

She replied: “The quiet one, the shy one. [He] later became gay. I did not do it. I had problems with that. I thought maybe I did. Looking back now when we were together he was so much fun. We used to do facials together. He was so easy to talk to.”

Her response sparked fan and media frenzy, as many felt the pop singer had just come out as gay. She later apologized for being so outspoken, according to The Hollywood Reporter.

Knight said there were no uncomfortable feelings and posted a statement on the band’s blog saying he didn’t consider their comments an outing, having come out to family and friends two decades earlier.

He wrote: “I’ve never been outed by anyone but myself! I did that almost twenty years ago. I never thought I’d have to do it again publicly just because I’m reuniting with NKOTB! I’ve lived my life very openly and have never hidden the fact that I’m gay! Apparently, the requirement to be a gay public figure is to appear on the cover of a magazine with the headline “I’m gay”. My apologies for not doing this if this was expected! My belief is that you live your life by example and not by a magazine caption! If there has ever been confusion about my sexuality, you are someone who doesn’t even know me!”

Knight continued, “I love living my life openly and honestly, but at this point I choose not to discuss my personal life any further! My bandmates don’t talk about their personal lives with their loved ones and I don’t feel like I should talk about mine just because I’m gay!”

Over the years, however, Knight has become a bit more open when it comes to talking about his relationship and life experiences, acknowledging the influence he has as a public figure. In 2015, he shared his excitement over the Supreme Court’s decision to legalize gay marriage nationwide and changed his last name on social media to reflect his relationship with Rodriguez, using the hyphenated Knight-Rodriguez name.

In 2016, he told Entertainment Tonight how hard it was not being able to be fully yourself as a teenager, from prom dates with girls to becoming a heartthrob for millions of girls when New Kids on the Block emerged.

“If we were where we are now then, I would have been openly gay with the New Kids from day one and it wouldn’t have been an issue,” Knight said. “There was such a stigma back then that I couldn’t even tell my best friend. These girls I went to prom with were really good friends and today most girls love gay guys and would say yes! Let’s go to prom!’”

“If we had been open then, we would have just had a better time,” he added. “I know I would have.”