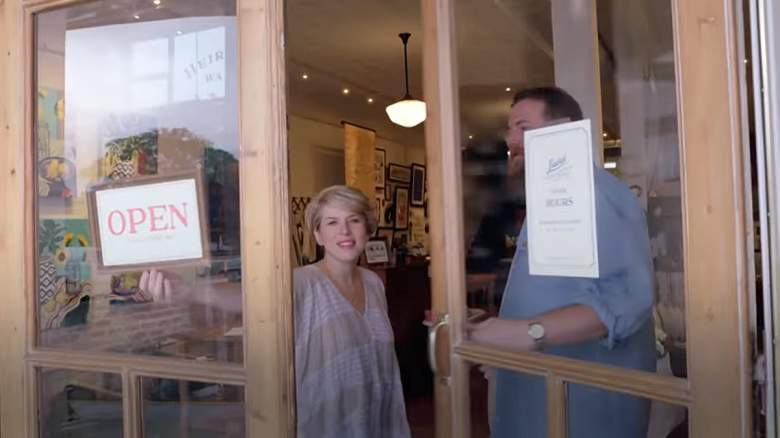 After sparking much online speculation about her next big venture in her small town of Laurel, Mississippi, Erin Napier, the HGTV star and her friends have revealed what kind of store she’ll be opening next — and one she’s always dreamed of Has.

The ‘Hometown’ star sparked much online speculation on September 7, 2022 when she posted an Instagram photo of a quaint storefront and said it would ‘kill’ her not to be able to share what she was working on.

Inside the store were large floor-to-ceiling banners designed to look like the spines of old books, including one entitled “Porch Party” penned by “Napier.” Another book banner had the word “Laurel” on its spine and the year 1882, which is the year Laurel, Mississippi – the hometown of the Napiers – was established as a logging camp. There was also one titled “Scotsman” and one titled “Portside”.

Many fans assumed Erin was building a bookstore because of her love of reading. But their colleagues at Laurel Mercantile, the home goods store the Napiers own with several friends, spilled the beans on their blog: The building they’re renovating in downtown Laurel will be a candle store that will also stock scented soaps and room sprays.

That explains why the shop window bears the words “Every fragrance tells a story”. Additionally, the titles listed on the book banners are actually names of existing candles sold at Laurel Mercantile.

It turns out that the secret Erin said would “kill” her not to tell wasn’t a big secret after all. Laurel Mercantile’s blog broke news about the candle shop back in July 2022, but it seems neither Erin nor her fans knew the secret was out when she revealed the unfinished storefront in early September. However, there are still some mysteries surrounding the store as the blog hints at specific design elements of the store being kept under wraps: “Without spoiling the surprise, let’s just say its decor, theme and customer experience inspire even the become the bluntest of noses.”

Ten years ago, one of the Napiers’ best friends and business associates, Josh Nowell – who often lends a hand on “Home Town” – bought the building that will house the candle shop long before the TV show even existed. Extensive renovations began in 2022 on the early 20th-century two-story building.

“This building is very special because I used to live across the street from it,” Nowell said on the blog. “I knew I wanted to see it evolve into something worthy of its story and luckily we’re starting to see it morph back into its original form.”

Nowell spent years researching the history of the building that housed Marcus Furniture for many decades. In 1936 it was redesigned with an Art Deco vibe, with an architectural glass called Vitrolite covering the entire front of the building, which became a tourist attraction for a while. But times changed, businesses fell, and downtown Laurel stagnated for many decades.

The fully restored candle shop will continue the robust revitalization that the Napiers, along with their business associates and many townsfolk, have undertaken over the past few years to bring Laurel back to life.

Erin’s role at Laurel Mercantile is as head of development for her candle line; Not only does she have a passion for scents, but she also has a special gift for perceiving and remembering them, which she wrote about in an Instagram post in May.

“Scent memory. Gosh, such a big part of who I am and what I’ve been reading about lately is called ‘core memories,'” she wrote. “It’s a strange ability I’ve had since childhood, the ability to photographically recall events, people and things in my life by smell. But I also reverse engineer it: the day I smell something new and wonderful, I remember everything about that scent, internalize it, and make a way to sniff a candle back to that time.”

As an example, she previously told Laurel Mercantile’s blog that her earliest olfactory memory recalls “just how my mother’s perfume smelled in 1991, when I was six years old.”

She turned many of her fragrant memories into the store’s best-selling candles, soaps and sprays. For her, each one evokes emotions that take her back to specific times and places in her life.

Nowell loved the idea of ​​converting the building he bought a decade ago into a candle shop. “We wanted to build a candle shop that celebrates the power of fragrance because we believe it can take you back in time or somewhere else,” he said.

The candle shop will open on West Oak Street in Laurel sometime this fall, and Erin is working on a new line of candles for the holiday season.