Hatchet buried for now: feuding brothers Harry and William walk side by side on Queen’s final journey 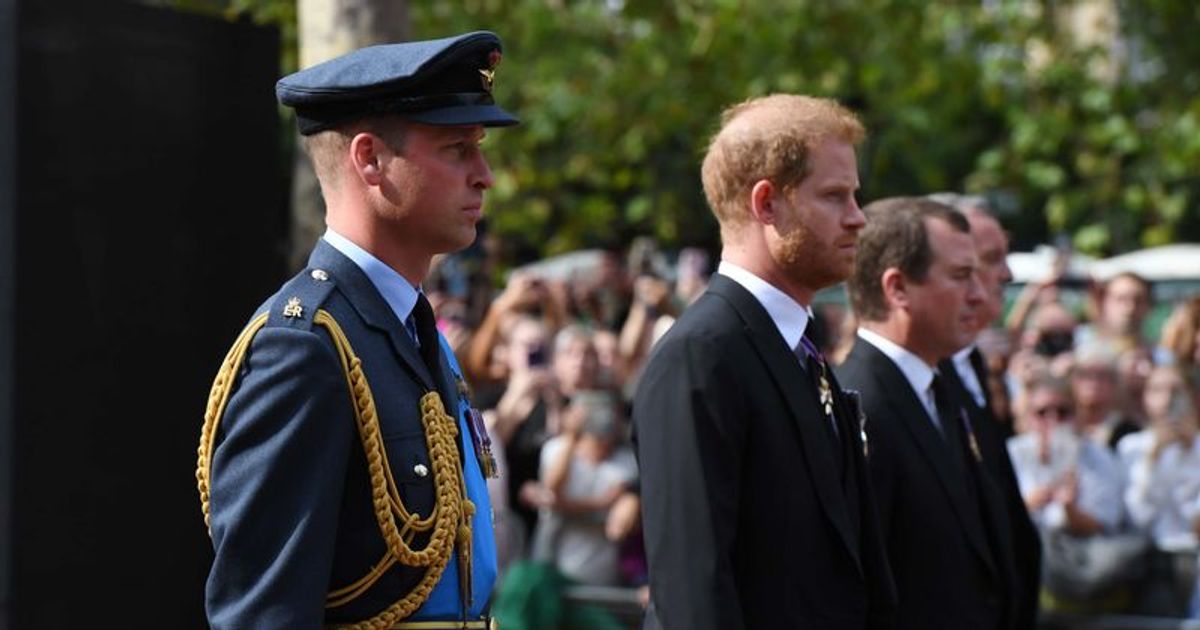 LONDON, ENGLAND: Mourning brothers Prince William and Prince Harry walked side by side during today’s heartbreaking event as the military bearer party carried the Queen’s coffin to Westminster Abbey for her royal funeral.

The brothers’ spouses, as well as two of William’s children, Prince George and Princess Charlotte, joined them after reconciling their differences to form a unified front in honor of their late grandmother. King Charles III followed closely behind the Queen’s coffin. and Queen Consort Camilla, Princess Anne and Vice Admiral Sir Tim Laurence, Prince Andrew, Prince Edward and Sophie, Countess of Wessex.

William and Kate also attended the ceremony, while George and Charlotte followed their parents in a line, followed by their uncle and aunt Prince Harry and Meghan Markle, as well as other members of the royal family. Harry and William were engaged together for the fourth time in just over a week. Royal observers believe this is a sign they are beginning to mend their strained relationship.

The boys also accompanied Kate and Meghan on a walking tour outside Windsor Castle on September 10 and followed the Queen’s coffin in a procession to Westminster Hall on Wednesday. Rumors of a rift between the brothers first surfaced in 2019 when they split their apartments due to multiple disputes over Harry’s position. The conflict intensified in 2020 due to the aftermath of the Megxit. However, the Queen’s death seems to have prompted the contenders to put their differences aside. Harry and Meghan have just rejoined William and Kate for the first time in more than two years since Commonwealth Day in March 2020.

The Royal Family were among the 2,000 mourners who attended the funeral today, which was followed by a funeral service at Windsor Castle. The Queen’s Representation in Westminster Hall, which ended at 6.30am, is followed by the service. The day marks the culmination of the largest security operation the UK has ever seen, surpassing the operation for the Platinum Jubilee weekend and the London 2012 Olympic Games, which saw up to 10,000 police officers on duty each day.

Working members of the Royal Family greeted the Queen’s coffin as it was carried into the Abbey. While King Charles III, Prince William and Princess Anne all made the gesture, Prince Andrew and Prince Harry were again banned and just stood motionless. This follows last Wednesday’s decision to ban Harry and Andrew from saluting during the funeral procession to Westminster Hall. Following the Queen’s death at Balmoral 11 days ago, it was decided to ban Harry and Andrew from donning military uniforms at most engagements. The same reason bans Andrew from saluting during last Monday’s vigil in Edinburgh, recalling how little part they both now have in the royal family.

Prince Harry served 10 years in the Army, but lost his honorary military titles in 2020 when he and his wife Meghan Markle announced they were stepping down as senior working royals and going abroad. The Duke of York, on the other hand, had to retire from public life due to the Jeffrey Epstein scandal in 2019.