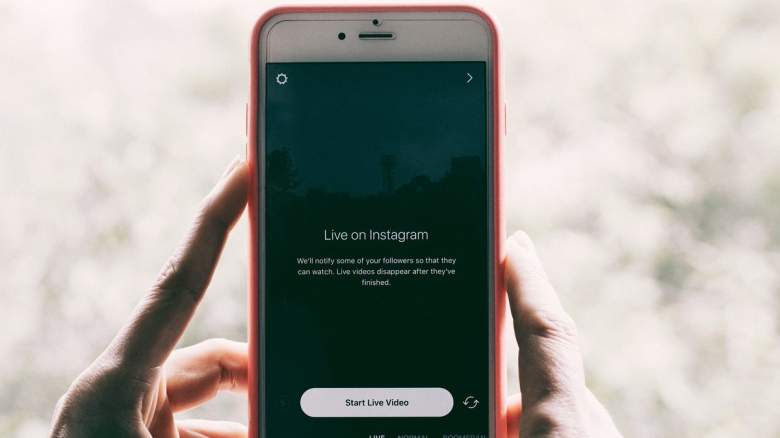 Kristoffer Polaha is so excited about the new Hallmark movie he’s making that he revealed several behind-the-scenes details during an impromptu online chat with friend and fellow Hallmark actor Benjamin Ayres on Jan. 10, 2023. Polaha is based in Asheville, North Carolina, where he has just begun filming A Biltmore Christmas starring Bethany Joy Lenz. He said he was already blown away by the production and even revealed the backstory of how the family behind the famous property came to work with Hallmark.

Noticing Polaha logged on Tuesday morning to watch his solo Instagram Live session, Ayres asked him to jump in for a quick, casual chat. Polaha soon appeared live from his Asheville hotel room, laughing as he donned a ball cap to cover his scalp hair.

Polaha revealed he’s filming there until the end of January, and stepped out of his room to show Ayres – and nearly 200 fans who tuned in – an expansive view of the Blue Ridge Mountains. Polaha said they only started filming the day before and expressed his gratitude for working on a film with such an incredible location, cast and crew.

“We’re making a good old-fashioned Christmas movie,” he said. “And you know how it feels when you get a gig, you’re just so grateful, so excited to start the year with a job. It helps a lot!”

But Polaha said this isn’t just any acting job. He revealed he was blown away by everything about the production, which Hallmark’s December press release says is set in the 1940s and marks the first time the historic Biltmore Estate has served as the setting for an entire film.

For starters, Polaha said he was blown away by the “amazing script.” Saying that screenwriter Marcy Holland “deserves a little shout-out.” Both actors have said they are unfamiliar with Holland, but according to IMBd, she has written for numerous Hallmark projects over the past several years, including the Time For Me To Come Home film series, several mysteries, including Nikki and Nora: Sister ‘ from the 2022 Sleuths’ and Holly Robinson Peete’s film ‘Our Christmas Journey’ from the 2021.

Polaha said, “Amazing script man. Like, it’s really tight. You know, when you’re reading scripts and you’re like, “There’s a lot of fat in this scene” and “That’s not necessary?” Every scene drives the story along. It’s like a real movie! It’s a really fun, great script.”

Ayres then shared with fans that on the set of a new film, Hallmark’s leads often tweak scripts and change their lines to bring the story to life. Polaha agreed, adding that he always assumes that with every film he needs to get involved as a writer and producer in order to have “creative control” over the finished product to make sure it’s something he’s looking forward to is proud to play in it. So, he said, he was pleasantly surprised that he didn’t have to do that with this new project.

He said, “I think Joy and I were both like, ‘Okay, we’re ready to roll up our sleeves,’ but we came here and we thought the producers are great, the guy — John Putch is directing — he’s great, the executives at Hallmark … it’s a really great team and all cylinders are running.”

Built in the late 18th century, the massive Biltmore Estate was the family home of famed entrepreneur George W. Vanderbilt, set on 8,000 acres. According to the Associated Press, the 250-room French chateau opened to the public in the 1930s but went into debt by the 1950s. The Cecil family, descendants of Vanderbilt, took over the business and more than 70 years later, the property, overseen by siblings Bill Cecil Jr. and Dini Pickering, thrives and is a National Historic Landmark.

In his Instagram Live with Ayres, Polaha said the family is “deeply involved in the co-production of this film,” adding that he’s already toured the Biltmore and had dinner with Chase Pickering, Dini’s son and a Biltmore executive .

When Ayres asked how the family was involved with Hallmark on the project, Polaha replied, “Well, do you want another really cool story?”

Assuming the story will eventually “come out,” he told Ayres that years ago after Chase graduated from the University of North Carolina, he had been an intern with entertainment executive Wonya Lucas. Lucas, who has her own historical lineage as the niece of baseball legend Hank Aaron, became CEO of Hallmark in 2020.

“So they were friends from back then,” Polaha exclaimed. “And I think he just called her and said… ‘Our family, we love the Hallmark Christmas movies, and would you ever want to do a Hallmark movie here?’ and Wonya was like “One hundred percent!”

“So cut it down to less than a year later,” laughed Polaha. “That’s kind of the beauty of Hallmark, isn’t it? We’re in that rare corner of the business where you can have an idea in May that gets filmed in January. You can’t hear that anywhere else.”