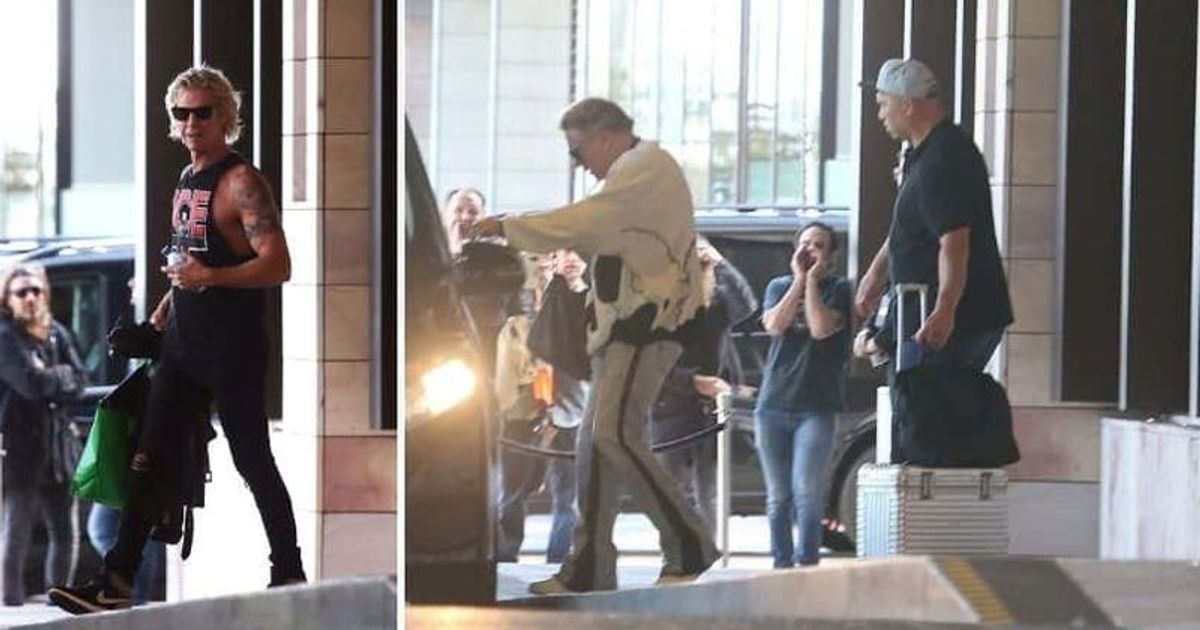 PERTH, AUSTRALIA: Guns N’ Roses band members Slash, Axl Rose and Duff McKagan were seen leaving their hotel after their massive stadium tour stop in Perth, Australia. The group members were seen walking towards a black car heading to Brisbane for their next performance, according to GLAM Adelaide.

The American hard rock band arrived in Perth on Sunday 13th November in their private Boeing 777 jet with 120 band and crew ahead of the massive stadium tour which began on 18th November and will continue through the end of the year. With concerts scheduled in Brisbane, Gold Coast, Adelaide, Sydney and Melbourne, the band is expected to dominate Australian stages in the coming weeks.

Duff McKagan wore a sleeveless black graphic t-shirt showing his skull tattoo and a pair of ripped jeans as he walked out of the hotel with a bottle in his left hand and some luggage in his right. The rocker completed the outfit with black sunglasses and Nike shoes.

Slash wore a Guns N’ Roses t-shirt, carried his signature black leather jacket and carried a bag on one shoulder, while his electric guitar was featured on the other. He replaced his signature top hat with a regular beanie and complemented his entire look with aviator sunglasses, a beaded bracelet and silver rings, as well as a nose ring.

The band performed to a record-breaking crowd of adoring fans at Singapore’s National Stadium on Saturday night, November 12, ahead of their arrival in Australia.

Paul Dainty AM, President and CEO of TEG DAINTY, promoting the show in Singapore said: “GUNS N’ ROSES were on fire on Saturday night, the audience went crazy and loved it! They have proven once again why they are one of the greatest rock bands of all time. Australian fans can expect to hear back-to-back hits from the band’s amazing back catalog throughout the tour,” reported GLAM Adelaide.

The Chats and Cosmic Psychos, two of Australia’s most celebrated punk rock bands, will be touring with Guns N’ Roses as special guests. The tour schedule includes:

Guns N’ Roses formed in 1985 and brought an untamed, unmatched and unstoppable attitude to Los Angeles’ burgeoning rock scene. Their 1987 debut, Appetite for Destruction, was the best-selling US debut album of all time, selling 30 million copies worldwide.