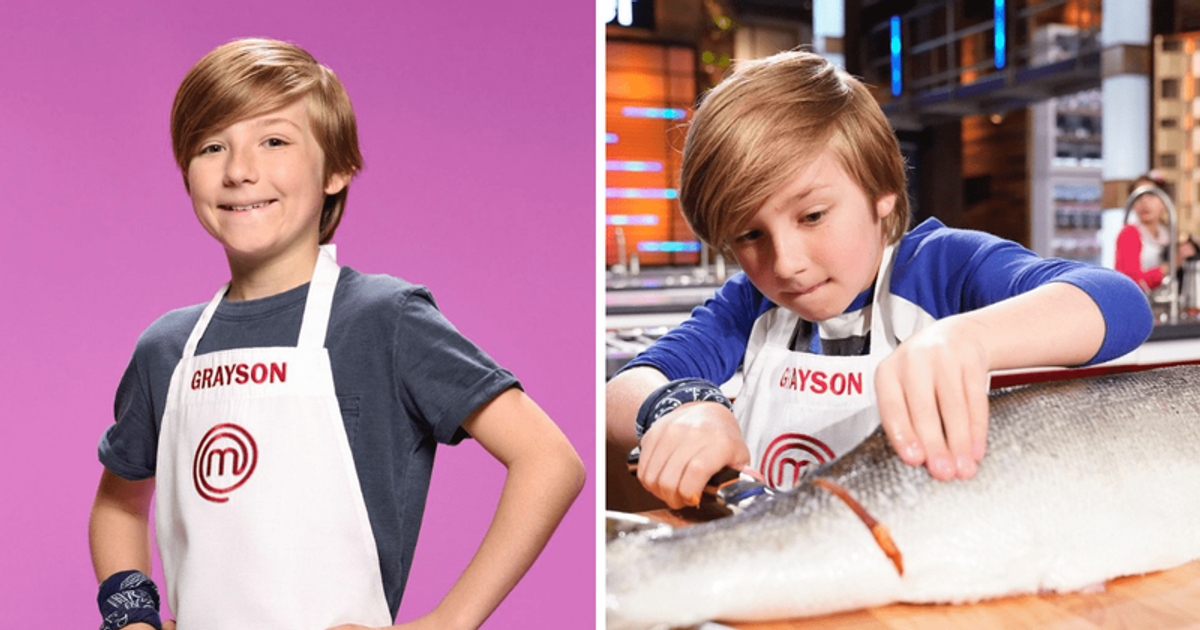 Grayson highlighted his competitors in Season 8 of MasterChef Junior and revealed his favorite food in an exclusive interview with MEAWW.

Season 8 of MasterChef Junior returns to television on Tuesday, June 14 at 9:00 p.m. ET on FOX with its semifinals featuring three lucky contestants battling for a spot in the finals. Grayson Price, a junior chef from Austin, Texas who has been a celebrity chef since the culinary competition began, will do anything to earn a place in the finals.

Grayson, Liya Chu, and A’Dan Lisaula won the elimination challenge in episode one. He’s been at the bottom twice so far. This happened once in Junior Edition: Totally Egg-stream! and then again in the Junior Edition: Alexander in a Box. Price even set up an online summer baking club during Covid to educate novice bakers on some wonderful recipes. Price’s signature dish, according to MasterChef Junior, is pan-seared duck breast with duck fat potatoes, Asian pears and blackberry gastrique.

Preview of the semifinals

After a three-year hiatus, MasterChef Junior returns with vigor for its eighth season. Grayson is on the show with a culinary ambition to build a tech-focused, ingredients-centric restaurant serving Japanese-French fusion cuisine in Los Angeles. In the episode leading up to the semifinals, he and Ivy Childs, Molly Leighninger, and Liya Chu fought for a semifinal position. The top four cooks were paired with a wrestler from World Wrestling Entertainment for the first tag team challenge. They were given an hour to recreate a buffet of finger foods like curried chicken puffs, lobster rolls, and buffalo chicken lollipops.

Chu won both the challenge and a ticket to WWE WrestleMania. The elimination task required all four contestants to prepare Gordon’s specialty truffle and yolk ravioli. After he was done, they had 60 seconds to put their dinner on the plate. Leighninger was eventually ousted from MasterChef Junior, and the three surviving chefs advanced to the semifinals. When asked about his competition on the show, Grayson told MEAWW, “Everyone was great, but I would say Ivy and Liya were my toughest competitors.”

This season, viewers have seen Grayson succeed and fulfill every task with his ingenuity. But what was this one challenge that he particularly remembers? “I particularly remember the restaurant takeover challenge – it was so much fun!” he tells us. In this particular challenge, he led the blue team, which also included Molly and Liya. They were tasked with serving a crowded establishment filled with customers who expected nothing but the best. The young chefs traveled to downtown Los Angeles and then to the Nomad Hotel, where they had a cooking demonstration by Rudy Lopez, the NoMad’s executive chef. Grayson seemed to be communicating well with his comrades, and Blue Team was highly focused. Grayson’s excellent lead kept the blue team at a solid pace. Although the blue team hiccuped when a steak was brought back from the dining room, the food was quickly retrieved and Grayson and his team won the task at the end of the day. So it stands to reason that the young chef has burned this special challenge into his memory.

The young chef draws inspiration from several great French and Japanese chefs, as well as current chefs such as René Redzepi (of Copenhagen’s Noma restaurant), who seek to push the boundaries of culinary art. He admits that his stint at MasterChef Junior taught him the “importance of organization and efficient time management in cooking.” Grayson, despite conjuring up some of the most spectacular and difficult-to-prepare meals in the competition to date, found solace in a decent bowl of pasta. When asked about his favorite comfort food, he said, “In terms of something savory, I love pasta carbonara for home cooking. When we talk about candy, nothing beats a warm chocolate chip cookie straight from the oven.”

Fox released an exclusive clip ahead of the semifinals this week. Grayson, Childs and Chu, the three semi-finalists, now compete to reach the MasterChef Junior finals. Judge Gordon can be seen in the clip speaking to Grayson’s family while the young chef sweats in the kitchen. Grayson’s father, Brad Price, expresses pride in what his son has accomplished and finds it “inspiring” to be a parent in Grayson’s journey. When Gordon addresses Grayson’s statement about spending time in the kitchen with his father, Brad says that Grayson apparently learned the skill of cooking immediately. When asked about her son’s performance, mother Christina Price expresses how “unreal” it feels that something Grayson has long dreamed of is now coming true. Grayson’s little sister, who is cheering on her big brother from the stands, tells Gordon that she believes in her brother’s ability to become the next MasterChef Junior.

So tune in to Fox on Tuesday, June 14 as Grayson battles the other semifinalists for a spot in this year’s MasterChef Junior finals.