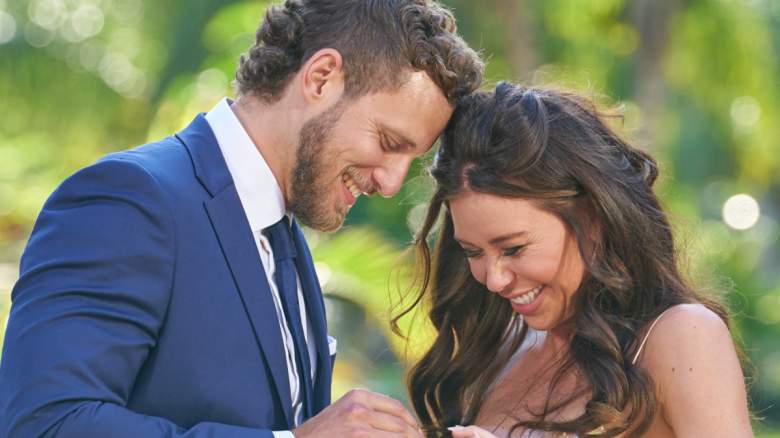 Gabby Windey and Erich Schwer got engaged on the finale of The Bachelorette which aired on Tuesday September 20, 2022. The couple made their first public appearance together on the After the Final Rose special.

Fans got their first-ever look at Windey and Schwer on live television, seeing them interact with each other and showing viewers just how in love they are. However, there is one person who really doesn’t buy it.

On his September 21, 2022 podcast and subsequent blog post, Reality Steve shared his thoughts on Windey and Schwer’s relationship. The spoiler king doesn’t see the two going any distance and predicts they will eventually split after Windey wraps “Dancing With the Stars.”

During Tuesday night’s ATFR, Schwer was asked about an ex-girlfriend who reached out with text messages telling her he was going to be on “The Bachelorette” because he wanted to see what opportunities there might be for him when he made the broadcast. He told the girl, whose name is Amanda, that he doesn’t believe in the show and basically just wants to see where reality television has taken him.

Jesse Palmer asked Schwer about the text messages and he said he didn’t know how else to let Amanda down. He explained that he didn’t see a future with her, so he took the “easy route” and tried to play it off.

On his blog, Reality Steve wondered if Schwer was even trying to play things off with Windey.

“Why are we supposed to think he’s not duping Gabby? Because he tells us he’s not? Because he shows PDA in a live show? It’s Gabby’s life, her choices and she can do whatever she wants. Obviously she is. Just sharing my opinion on what I saw last night and if I were her it would bother me more than she seems willing to admit,” Steve wrote.

Although Schwer and Windey have only been an official couple for less than 48 hours, Reality Steve is already making a bold prediction. He doesn’t think the two have staying power and predicts they will break up after Windey’s time at DWTS.

“I don’t think Gabby and Erich will make it for a second. I think Gabby’s star is on the rise, she’s gaining popularity, she’s definitely going to be with DWTS for at least two more months, and Erich is just there. I think she will eventually see the light of day, so it’s not like I’m holding out hope that these two will be buying china sets together anytime soon,” Steve wrote on his blog, echoing the thoughts he shared on his podcast would have.

Steve further suggested that Windey might hold Schwer on the rope to see how they are together once normal life kicks in, but call things off shortly thereafter.

“I don’t think SHE realizes how serious they are, even though they’re engaged, if that makes any sense. I mean, the People magazine cover story is about Rachel & Gabby together, not even Gabby and Erich. Kind of weird,” Steve wrote.

On his podcast, Steve said Windey was a long way away [Erich’s] League.”