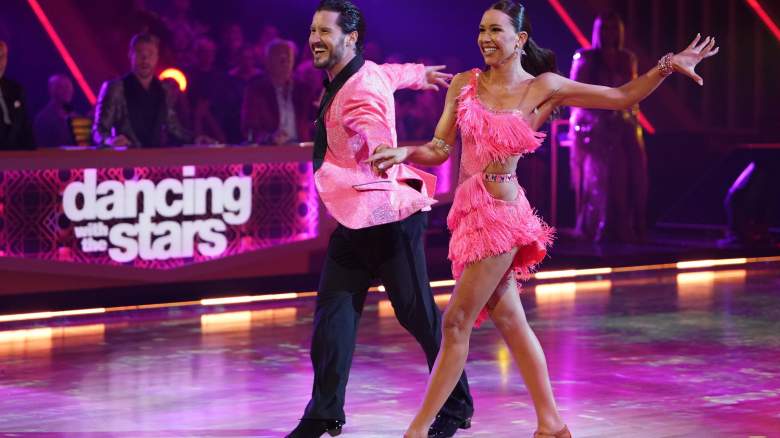 Fans of Gabby Windey were able to catch her in Bachelorette mode and in full dance mode on Monday, September 19 during the season 31 premiere of Dancing with the Stars on Disney+. She and partner Val Chmerkovskiy dressed in sparkling pink as they danced to Harry Styles’ “As it Was.”

Windey’s segment began by introducing herself and saying, “You may know me from ‘The Bachelor,’ where I got my heart broken, but no hard feelings.” She then spoke about how lucky she was to be given a second chance get, and that being with DWTS is “a dream come true.”

The scene then switched to the first meeting of Windey and Chmerkovskiy. Windey seemed very excited about who she had been paired with. She hugged him and exclaimed, “You’re the best!” Chmerkovskiy shared with Windey that there’s a history of Bachelorettes doing well in the competition, so “no pressure.”

Chmerkovskiy then asked Windey about her previous dance experience. She told him that she had danced throughout high school and that she was a cheerleader for the Denver Broncos for five years. However, she admitted that she’s more of a “performer” and less of a “technical dancer.” She also confessed that she has no ballroom dancing experience.

Windey told the cameras that she gets nervous thinking about the performance. “I think I’m just going to break down,” she revealed.

The performance began with Windey in a fringed pink dress sitting in a large sparkly swan. She and Chmerkovskiy performed an energetic jive dance to Harry Styles’ “As It Was.” Windey’s co-Bachelorette and best friend Rachel Recchia was in the audience along with Chmerkovskiy’s wife Jenna Johnson. Recchia is actually the one who cast Windey on DWTS promoting her friend.

The jury was very impressed with the performance. Carrie Ann Inaba said Gabby was “amazing”. She gushed, “Your legs are incredible. Wow! I was blown away.” Windey humbly pointed to Chmerkovskiy and said, “It’s all him.” Inaba replied, “No, it’s all you,” to which Windey laughed and admitted, “You’re right, it’s all me.”

Calling it “the best performance of the night so far,” Derek Hough told Windey, “Your rotation was off the hook!” Judges Len Goodman and Bruno Tonioli kept their comments short but positive.

New co-host Alfonso Ribeiro interviewed Windey after the judges made their comments. He mentioned that Bachelor Nation star Melissa Rycroft was also a cheerleader and won “All Stars.” Ribeiro wanted to know if that had any impact on Windey, but instead of answering the question, she just reiterated that she’s more of a performer than a technical dancer. She asked Ribeiro if that answered his question and he said no it really didn’t but they were short on time so he dropped it.

Windey and Chmerkovskiy received a score of 7 from all four judges for a total of 28/40. Windey topped the voting leaderboard but the highest score of the night went to Charli D’Amelio and Mark Ballas who scored 32/40. Jason Lewis and Peta Murgatroyd were the first couple to be eliminated.

Fans who can’t get enough of Gabby Windey can catch her in The Bachelorette Part 2 Finale on Tuesday, September 20 on ABC.