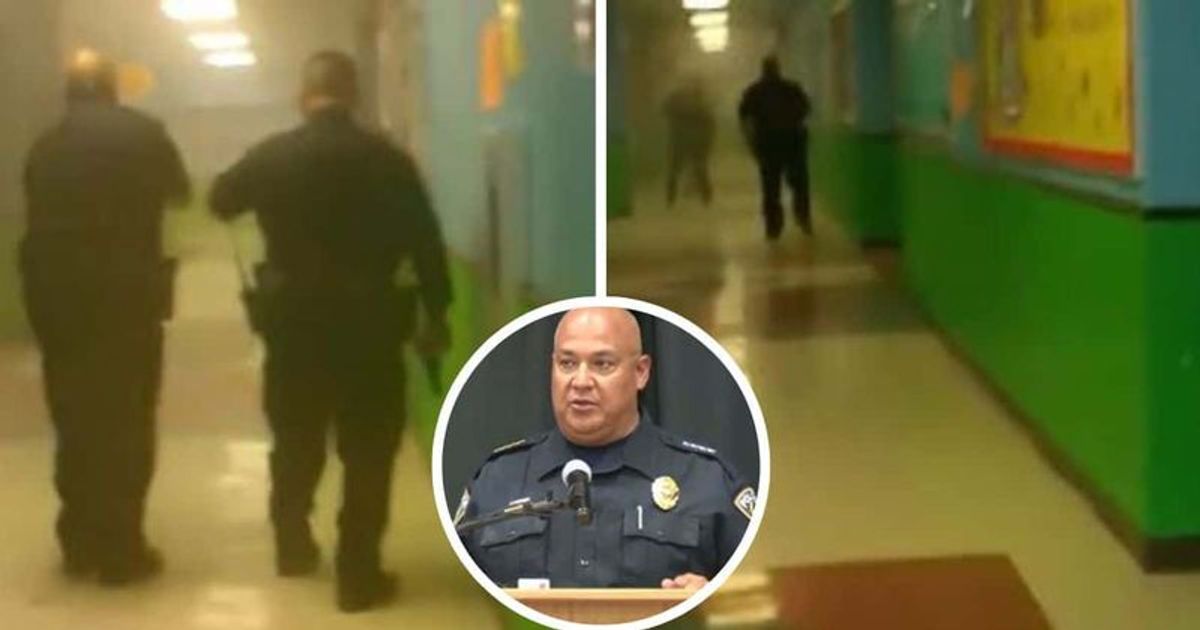 “Can you hear me, sir? Sir, if you can hear me, please put your gun down, sir,’ Arredondo is heard saying

Almost two months after Texas’ deadliest school shooting, body camera footage of inside Robb Elementary School in Uvalde was released to families and the public on July 17. The 77-minute video showed the inside of the school on May 24, where no sound was included. However, another video with the sound on shows Police Chief Pete Arredondo standing outside a classroom trying to negotiate with Salvador Ramos, the 18-year-old who left 21 dead, rather than deal with the mass gunman, who continues to fire.

In the video, shared by CNN correspondent Ryan Nobles, Arredondo urges the teenager to talk to him, tries to reassure him “this could be peaceful” and asks him to put down his gun. Despite the pleas, more shots are heard from the classroom. The police chief continues: “Can you hear me, sir? Sir, if you can hear me, please put down your gun, sir. Unlike the previous footage from the school’s security camera, the new footage shows close-ups just outside Classrooms 111 and 112 and shows conversations between officers and requests to the shooter, CNN reports.

When Arredondo walks in, he seems unaware that Ramos has barricaded himself in the classroom with students. He says: “Tell me if there are children in there or something. That could be peaceful.” Hearing no response, he asks again, “Can you tell me your name, anything that can help you?” Again, this did not result in a response from Ramos. A few minutes later, a 911 dispatcher informs officers that a student called, revealing that children and teachers are with the shooter. Exactly six minutes later, Arredondo is seen trying to open the door to a nearby classroom with a bunch of keys, but is denied access. Followed by him who gives the keys to another officer who manages to get into the room. More armored officers arrive at the site, but no major action is taken. Another round of shots is then fired, prompting Arredondo to push again with the teenage shooter. “Can you hear me, sir? Sir, if you can hear me, please put your gun away, sir. We don’t want anyone else to get hurt.” It was at least another half hour before officers entered the classroom where Ramos had barricaded himself and killed him.

After the video became public, one responded by saying, “I didn’t realize one of them called 911 while they were in the room… crazy.” Another user wrote, “Honestly wtf. We understand the job is scary, but standing there while children are being killed is insane to me.” Users continued to blast police for inaction at the scene. One person commented, saying: “That ‘can you hear me sir’ at around 5:20am almost killed me. I just can’t even…”

On the other hand, the 77-minute video documents the details of how Uvalde cops handled the situation when Ramos entered a classroom at Robb Elementary School and started shooting – killing 19 students and two teachers inside. According to the DailyMail, the lengthy video begins with Officer Gazaway standing outside the building at around 12:04 p.m. and slowly entering the building where other officers are waiting with their guns. Among them at that time, some officials were still waiting outside and talking at the school entrance, while others were talking in the school corridor.

However, the video was the subject of intense political debate and many did not want it released. Before the footage was released, rep Burrows expressed his displeasure with the video’s release. He said: “The committee is aware that part of the hallway video has been released. While I’m glad a small portion is now open to the public, I think I’ll look at the entire segment of law enforcement response, or lack thereof. is also important.”