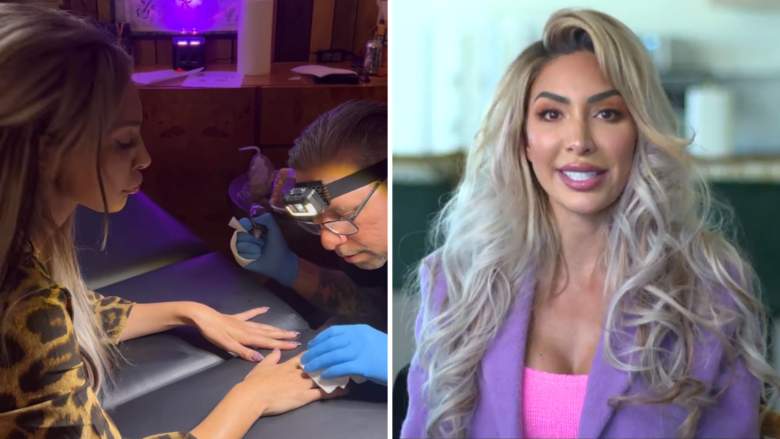 Former Teen Mom star Farrah Abraham decided to try something new. The mother-of-one has a tattoo — but it’s so small you might not even know it’s there.

31-year-old Abraham went to Soho House in Austin on October 10 to get a tattoo from Eddy Ospina. The reality star dubbed her new tattoo “Farrah Freckle,” according to screenshots obtained by The Sun.

“My first Farrah Abraham tattoo, hey! That’s my point. Let’s go crazy,” she said in an Instagram video posted by The Sun.

Abraham wore a leopard dress for the tattoo and had her platinum blonde hair pulled back in a claw clip.

Ospina warned Abraham that the tattoo would hurt but said it wouldn’t take long to finish. “Well, you know, it’s going to sting, okay, but it’s going to be really fast and fast,” he told her.

Abraham looked into the camera and repeated what her tattoo artist said. “You know it’s going to sting, but it’s going to be quick,” she said.

She spread her right hand so the tattoo artist could ink the inside of her middle finger.

Ospina told Abraham he would be tender. “I’ll be gentle,” he told her.

It seemed like Abraham was looking for something semi-permanent.

“My freckles don’t have to last 10 years. My freckles can last two seconds,” she told him.

“So what I’m going to do, I’m going to be very easy going. You’ll check it out,” Ospina offered. “And if you want it a little thicker, let me know.”

Abraham was unperturbed by the pain. She made an unimpressed face and said to the camera, “I don’t think it really hurts.”

After the tattoo was finished, Abraham posed for a photo with Ospina. She leaned into him and pointed to the “Farrah Freckle” on the inside of her finger.

So why would Abraham get a tattoo if she doesn’t want it to be permanent?

The former Teen Mom star previously said her daughter, 13-year-old Sophia, encouraged her to go to tattoo shops. The teenager got a septum piercing for her 13th birthday and is interested in more tattoos and piercings.

At the time, Abraham didn’t seem interested in getting a tattoo.

“Sophia asked for tattoos and I don’t have any. I don’t say anything bad about tattoos. My friends have them. People have them,” she told In Touch Weekly. “Sophia has definitely gotten me into trying to get myself to go to tattoo parlors lately and I have no idea what the point is.”

Abraham isn’t the only one getting a finger tattoo.

They’ve surged in popularity — especially in 2022 — as celebrities like Kylie Jenner, Hailey Bieber, Rihanna, and Ariana Grande have tiny marks on their hands.

How long a finger tattoo can last on a person all depends on the person.

“Finger tattoos tend to fade a little faster because of the constant use we make of our hands, which causes the skin to shed and heal more often,” tattoo artist Erica Rose told Bustle in March 2022. “It’s really hard to say how long it’s going to be . Everyone’s experience will be different.

Abraham isn’t exactly out of style when he gets a “freckle.” Tiny dots are one of the most popular tattoos people get on their fingers.

Some fans on Reddit were confused by Abraham’s new ink.

“Who gets a freckle tattoo,” one person wrote.

“Wtf is a Farrah Freckle?!” demanded another.

Others accused Abraham of being a hypocrite. “Wow she was always so against tattoos kind of surprised by that but also wtf because the surgeons wouldn’t let anyone operate on her to enhance her body,” they said.