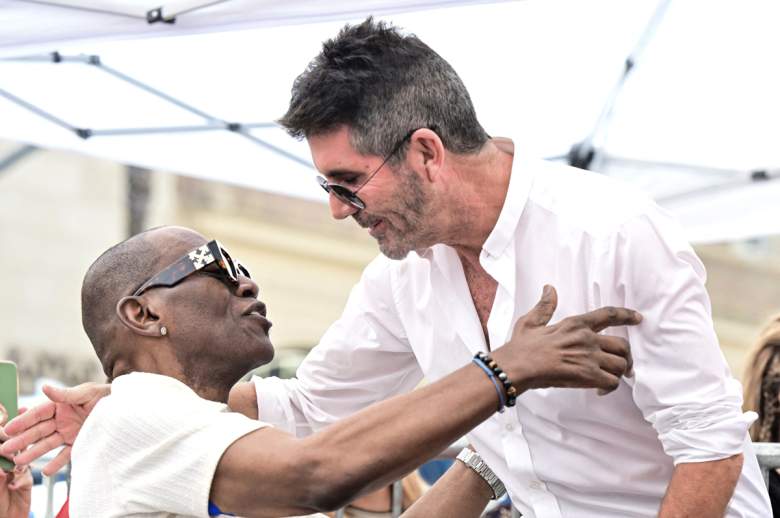 “American Idol” fans were ecstatic when Kelly Clarkson accepted her star on the Hollywood Walk of Fame, surrounded by all three “Idol” judges who crowned her the show’s inaugural winner in 2002. But supporters also expressed major concern over Randy Jackson’s surprisingly poor performance at the ceremony, particularly after videos of him struggling to walk began surfaced online.

Randy Jackson appeared to be in good spirits at Clarkson’s Walk of Fame ceremony on September 19, 2022, joking with Cowell and Abdul from his seat and smiling for photos with the group. But what most fans didn’t see during media coverage of the event was how much 66-year-old Jackson struggled to stand and walk on his own.

During the photos, the music producer and bassist tried to hide his cane behind him and held on to Cowell’s shoulder most of the time. After the group of judges hugged Clarkson and broke up, Cowell could be seen on the live stream video watching his friend closely and wrapping his arm around Jackson to support him. Jackson then grabbed one of the poles holding up the overhead tent to find his balance.

The following day, videos taken by other attendees at the event began to surface on social media, affecting fans.

In a YouTube video from celebritychaos.tv, Jackson can be seen entering and exiting the event with an assistant and a security guard, looking frail and unsteady on his feet.

But the most viewed video was on TikTok. Within 24 hours of the ceremony, a TikTok video posted by Lupe de Los Santoz, showing Jackson politely saying “See you later mate” to a benevolent fan while slowly exiting the event, has been viewed over 2 million times. Viewers flooded the post with concerns about Jackson’s health.

One viewer wrote, “My (heart) broke into pieces emotionally when I saw that…” and added a crying emoji.

“Was I under a rock?” someone asked. “What’s wrong with Randy?”

Fans also took to Twitter to voice their concerns and questions. One wrote: “Damn man. what condition is randy jackson in? it makes me so sad just to look at him.”

But many social media users encouraged others to be kind and use their feeds to spread well wishes and support Jackson’s perseverance.

One Twitter user wrote: “I just saw the video from Randy Jackson. After a little research, I learned that nothing was said, so the best we can do is send him well wishes, encouragement, positive vibes, prayers, etc.”

In the comments section of the TikTok video, one viewer wrote, “He came out for Kelly (crying emoji), pretty brave of him knowing people would talk.”

Another commented: “God bless him as he struggles through whatever it is. He’s definitely pushing forward.”

Hours after the Walk of Fame ceremony, Jackson sent a congratulatory message to Clarkson on Instagram, but didn’t address fans’ growing concerns about his health.

In the past, he’s been an open book about his health challenges. In 2003, Jackson was diagnosed with type 2 diabetes and lost over 100 pounds with gastric bypass surgery. But in April 2022, he told Yahoo! Entertainment reporter Lyndsey Parker said the weight was coming back, so he had to find alternative ways to lose it again.

Jackson told her he went on countless diets, shots, and even “drank women’s urine” — but eventually found success with supplements he developed with several doctors and co-founded a supplement company called Unify Health Labs.

During this interview, taped five months before the Walk of Fame event, he said of his vitamin company, “I love it. I think I look pretty good now!”

Also in April, Jackson told KTLA’s Sam Rubin that his body is “like night and day” now compared to years ago.

“It’s so funny that my doctor finally says to me, ‘Finally! you’re at the bottom of the weight chart where you should be for your height,'” he continued. “I don’t think I’ve ever been there in my life! But it’s great, listen, I feel great, it’s really good.”

In his April interview with Yahoo! Entertainment, Jackson told fan speculation about what he looks like comes with celebrity territory.

“Hey man, you gotta give zero F or you’re not even going on that stage,” he said, providing examples of the kind of despondency stars hear about their performance. “Her eyes are too close together, his knees are pounding, his teeth are jacked, his hair – he needs extensions, I don’t like his skin, he looks like he has a swollen stomach. The audience tears you to shreds. So if you want to take the oath and become a public figure, get ready. Getting ready.”

“So I don’t understand how people get out of shape. You wanted this job. They’ll talk about anything about you,” Jackson continued. “That’s why you never saw the leaders, the real rock stars, sweat. They don’t care what you say.”

Jackson has been active in the music scene in recent years, but his projects didn’t require him to stand or walk around. In Spring 2022, he returned for a second season as the bandleader on FOX’s “Name That Tune,” sitting at the piano while filming the show in Dublin, Ireland.

The artist also rejoined his old band Journey for the first time since 1986 to record their 15th album Freedom, which was released in July. And he told Guitar World in August that he was working with various musicians on his own album.

Jackson is scheduled to appear on The Jennifer Hudson Show on September 22, but the interview was taped prior to Clarkson’s Walk of Fame event.