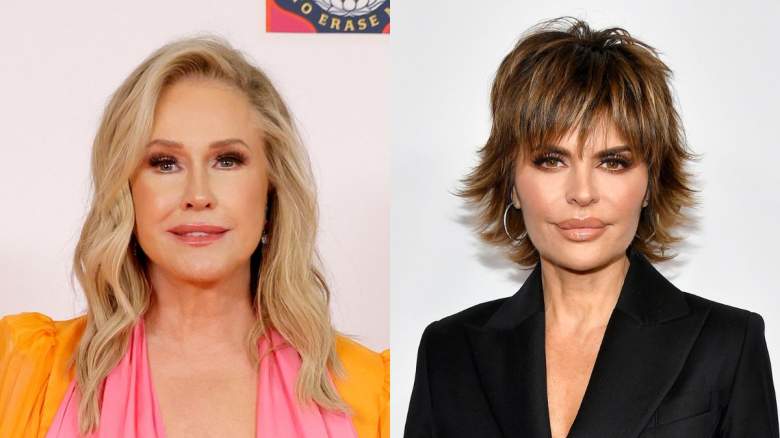 On “Real Housewives of Beverly Hills” Season 12 Episode 19, Lisa Rinna spoke about Kathy Hilton’s behavior after a night out in Aspen. She claimed Hilton spoke negatively about her sister, Kyle Richards. In a confessional interview, the “Melrose Place” actress hinted that she thinks Hilton is jealous of Richards. She noted that the “Halloween” actress’ husband, Mauricio Umansky, has a successful real estate company called The Agency. She also mentioned that the 2018 series, titled American Woman, is based on Richards’ childhood.

“[Kathy is] screaming she made Kyle. Kathy is responsible for Kyle. And she said, ‘I’m going to destroy Kyle and her family if it’s the last thing I ever do.’ Kyle is way more famous and way more successful than Kathy Hilton ever was and Kathy is obviously still angry about The Agency, ‘American Woman’. I think it was very hard for Kathy to have everything and then have her sister have more,” Rinna said.

A Reddit user shared the clip on the Bravo Real Housewives subreddit.

Quite a few RHOBH viewers slammed Rinna for her comments about Hilton and Richards in the post’s comments section.

“Hilton is an internationally recognized name, not to mention Paris Hilton. The name ‘Kyle Richards’ isn’t,” one commenter wrote.

“No one but HW fans knows who Kyle Richards is,” shared another person.

“Almost everything Rinna said about Kathy could apply to Kyle’s feelings [her sister] Kim [Richards], especially fame and fortune. Without this show, very few people would know who Kyle is, and even then, Kathy is a fan favorite,” claimed one Bravo fan.

“Rinna can’t imagine anyone NOT wanting to be famous because that’s all she lives for. Check out how she’s pushed her absolutely average daughters down the path to stardom despite having absolutely no discernible talents whatsoever (other than fame w*****.),” added a Reddit user.

“Is Rina okay? Lmao she thinks she knows all this information between sisters and honestly I don’t think she really knows,” shared another.

“Kathy is a Hilton. She is the mother of Paris Hilton. She’s got more money than the entire cast combined. Rinna continues to be a clown,” said one social media user.

“Even though Kathy’s fake idk, it just feels wrong how overly Rinna gets involved in Kyle’s arguments with her sisters,” commented a RHOBH viewer.

“How unsurprising that Rinna thinks the value of Kathy and Kyle is basically more ‘famous’. Contrasted with finding value in their decades-long sibling relationship and that it’s complicated and not just a holding on to things but much more nuanced and fraught with trauma that transcends generations. Like Kathy is a fanatic and shit and I don’t want to see Kyle on the show for a lot of reasons but Rinna only sees the world through one lens and that’s fame. It’s so gross,” wrote one Bravo fan.

“Wtf is Lisa talking about this? Kyle’s acting roles and a season TV show on a similar 3rd tier network mean she’s more accomplished than Kathy? All Kyle is ‘over’ about Kathy is housewives and the tensions that exist because Kathy (right or wrong) is overly protective of her mother’s legacy. Other than that, they both have beautiful families, wealth and husbands, so I don’t understand how Kyle has sooooo much more 🤮,” a ninth person chimed in.

During an interview with E! Insider Hilton shared if she would be interested in being a full-time member of RHOBH. She explained that she would continue to appear only as the show’s “friend” as she doesn’t want her family to be heavily represented in the Bravo series.

“You know, normally you’d say never say never, but you certainly don’t. No, because that way you have to involve your family and my family would not be interested. And my husband wouldn’t be interested. He’s a businessman. So it will never happen. They expect you to include all of your children, your husband, everything,” Hilton said.