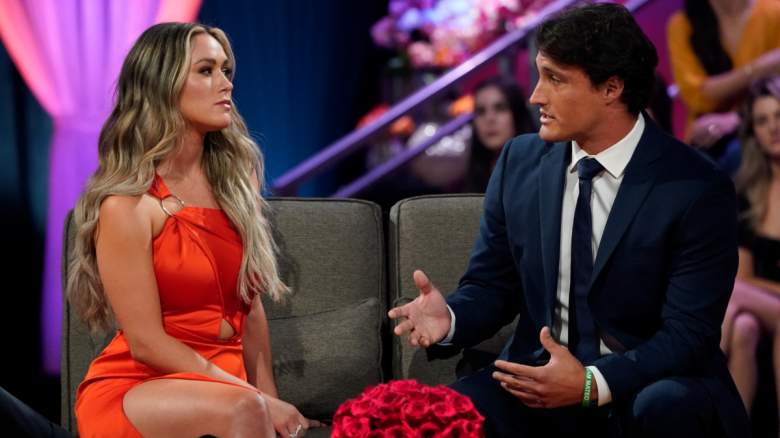 Fans are outraged after the After the Final Rose special, which aired live on Tuesday, September 20, 2022.

The first-ever season of The Bachelorette together ended with Gabby Windey getting engaged to Erich Schwer and Rachel Recchia’s engagement to Tino Franco ended in heartbreak after he admitted cheating on her. But things weren’t straight cut and dry.

The producers decided to let Recchia explain a bit about what’s been going on between her and Franco over the past few months before airing some footage taken during a “happy couple’s visit” after filming wrapped. For a few minutes, fans watched an argument between Recchia and Franco as the two went around in circles and finally broke up for good – Recchia took off her ring and gave it to Franco.

However, it’s what turned out next that upset several fans.

Host Jesse Palmer Palmer invited Franco onto the ATFR stage, where he sat down with Recchia and the two reconnected – this time in front of a live audience. After the two mixed things up — and got nowhere — Palmer moved things on, closing one door and opening another.

In an unexpected twist, Palmer told Recchia that someone had come to the studio and wanted to see her. She looked confused but genuinely curious as she obviously had no idea what was going to happen next.

Palmer introduced Aven Jones, Recchia’s runner-up, and her face lit up. Franco sat embarrassed on the couch. Jones asked Recchia to go out and catch up, and she said, “I wouldn’t love anything more.” The two walked off the stage together, leaving Franco standing confused next to Palmer.

Social media filled with comments about how Franco didn’t deserve things to play out the way they did.

“I don’t like Tino, but the way it went was CRUEL. He failed, didn’t know how to deal with it, we all deal with difficult emotions in relationships and we know how long that can take. He apologized and she obviously wouldn’t accept any apologies. I kept saying in my mind: ‘Stop talking, Tino! You’re making it worse, Tino!’ That was humbling,” one person wrote in a Reddit thread about the finale.

“I think we can empathize with Rachel and acknowledge that Tino wronged her and hurt her badly and deserves to be called out for it – while not taking that vengeful stance that the right and appropriate response is to take him in the humiliating national television (not only pertaining to the Aven segment, but everything from the breakup to the departure of Aven & Rachel). It’s such a slimy way of handling the situation, it’s exploitation by Rachel and Tino. I blame TPTB, not Rachel,” read another comment.

“He didn’t deserve this at all – just because he kissed someone, for which he immediately showed remorse to Rachel, did he deserve to be publicly humiliated on national TV, seriously? … He may be stupid, but no, he doesn’t deserve what happened to him on national TV last night,” added a third Redditor.

“It was absolutely wrong that they did this to Tino. You honestly should have spent that time addressing Erich’s racism instead,” said another.