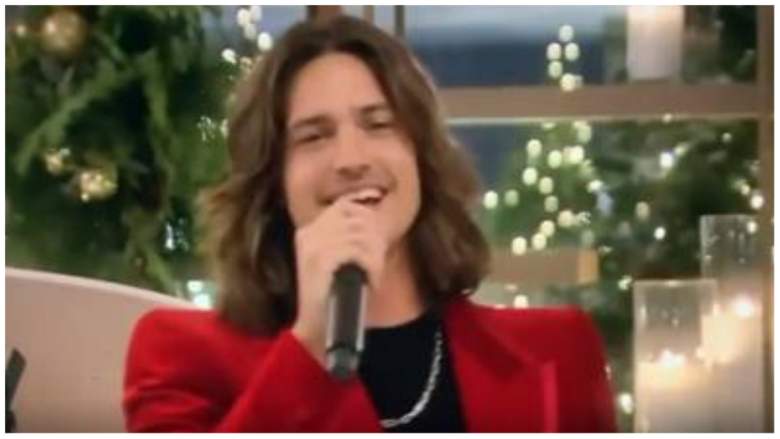 Bravo fans are talking about a Christmas party scene that was featured on The Real Housewives of Beverly Hills.

On the July 27, 2022 episode of the Bravo reality show titled “Beverly Hills Blackout,” the group attended a Christmas gala at the mansion of newcomer Diana Jenkins. Alongside food, drinks and an over-the-top display of lighted trees that gave off a department store vibe, Jenkins kept her guests entertained – in the form of her fiancé, Asher Monroe, who is 15 years her junior.

As Asher got up to play his rendition of the Christmas carol “O Holy Night,” an overwhelmed Erika Jayne began singing along loudly from her seat. What followed was an awkward segment that flashed a crying Kyle Richards and an upset Garcelle Beauvais, who pointed out that Erika had once again had too much to drink at a group gathering.

“Asher really blew everyone away,” Richards said. “It wasn’t just that he’s so talented that he’s incredibly talented. It was also the songs he sang that brought me back to adulthood. … So it felt very sentimental. Everyone really got swallowed up.”

“Asher performed, he has a beautiful voice,” Beauvais added. “Among us was a heckler named Erika Jayne.”

Erika also chimed in to say: “Asher was amazing. But I was the second most entertaining thing after Asher.” The “Pretty Mess” singer also said Jenkins told her she made it a good party by joining in.

While the RHOBH cast praised Asher’s performance, some fans weren’t so sure. On social media, some viewers wrote off the scene as cheesy and reminiscent of an audition for a TV talent show.

“His American Idol audition?” one viewer wrote in the comments section of a clip of Asher’s performance.

“Is that Konstantin?” another cracked in reference to “Idol” alum Constantine Maroulis.

“Diana invited everyone to her son’s little Christmas concert. That’s cute,” joked another.

“Where’s David Foster when you need him?” asked another.

“This whole scene was CRINGE! the fake tears, Erika trying to steal his thunder, Diana giving the stage mom vibe,” another viewer chimed in.

“He’s a struggling musician using Bravo as a platform. Now we know why Diana probably agreed to the show,” wrote another.

Jenkins also responded to comments about her husband. When one Instagram user wrote of Asher, “Somebody put out a new album in 2022 and it wasn’t Erika Jayne!” she replied, “It’s a freaking good album.”

Jenkins also denied she signed on to the Bravo reality show to further her fiancé’s career, after one commenter wrote, “You must love him very much to be on this show and promote his album.”

“The album is fantastic, but Asher made this for me,” Jenkins replied. “Actually, I did this show for completely different reasons. Babies. So much embarrassment about fertility/miscarriages: woman in her 40s getting pregnant etc. I didn’t know what I was getting myself into.”

Asher Monroe was actually a lifelong performer. The 33-year-old first appeared on Broadway at the age of seven in Beauty and the Beast and has a list of acting credits that includes the film Pop Rocks and teen sitcom Zoey 101 . According to his IMDB profile, he also appeared in the eight-episode NBC drama series Parenthood.

Asher also landed a record deal with Warner Bros. Records and was the lead singer for the band V Factory, according to Bustle. He has performed with big names like Pitbull and American Idol alumnus Kelly Clarkson, and in July 2022 he released his Broadway World solo album Windows of Time.

According to Women’s Health, Asher said his fiancée impacted his life — and career.

“[She] has had a valuable impact on my career,” he once said of Jenkins. “She has stood by my side through thick and thin. Without her I wouldn’t be the man I am today. I’ve always looked up to her for the way she lives her life. Be a role model, war survivor, philanthropist, mother, entrepreneur and more. It’s hard to scratch the surface of the impact she’s had on me forever.”