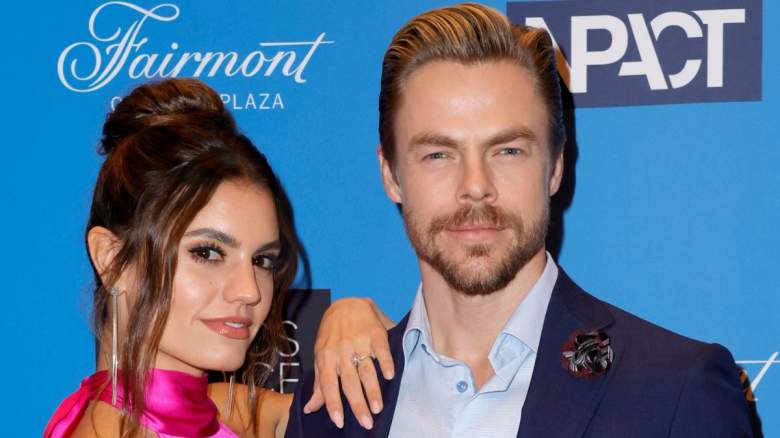 Some fans were left confused after Hayley Erbert and Dancing With the Stars judge Derek Hough shared an Instagram video of their “first dance” in wedding attire.

“Exclusive look at our first dance 😉🤍,” wrote Erbert as a caption to the post.

The video made fans think the couple secretly tied the knot, but they were quick to correct those who had questions.

“Am I missing something? Did you have your ceremony?” one person asked in the comments.

Another wrote: “Awesome! Congratulations to you both!”

“PS.. We haven’t married.. yet! 😂 This look was for a project we just shot. 🙃,” Erbert wrote after seeing all the comments.

The snippet of the dance Erbert showed looked goofy, though Hough teased plans for her real first dance in a September 2022 interview on The Jennifer Hudson Show.

“We have to do something special, spectacular, subtle,” he told Hudson. “Maybe you’re coming in from the roof, I don’t know.”

In the comments section of the post, Hough revealed that he and Erbert hadn’t gotten far enough in their wedding planning process to have their first dance choreographed and practiced.

When one person asked if the couple had already tied the knot, Hough replied, “No, no, no. Haha. I still don’t have a venue :))”

The couple went public with their relationship in 2017 and have two dogs and two cats together, Hough previously told Heavy.

Hough and Erbert haven’t told their fans when they tied the knot, but they did share some details. In an October 2022 interview with Parade, Hough shared that he and his wife-to-be will dance together at the wedding, and the ceremony will take place next year.

“I didn’t really want the pressure of having to perform,” Hough told the outlet, saying he didn’t originally plan on performing a dance at his own wedding. “But after sitting on it for a couple of months, I’m like, ‘Yeah, I think there might be an expectation, we’ve got to do a first dance.’ So we’ll probably do a first dance, and it’ll be beautiful.”

ABC announced on Wednesday January 11th that they will be presenting the fifth “Singalong” special. The theme of the upcoming special is “Schoolhouse Rock”.

“ABC takes viewers to school, inviting friends and family across the county to gather and enjoy the classic ‘Schoolhouse Rock!’ to enjoy! Hits that are as educational as they are catchy, all to celebrate the 50th anniversary of the popular series.