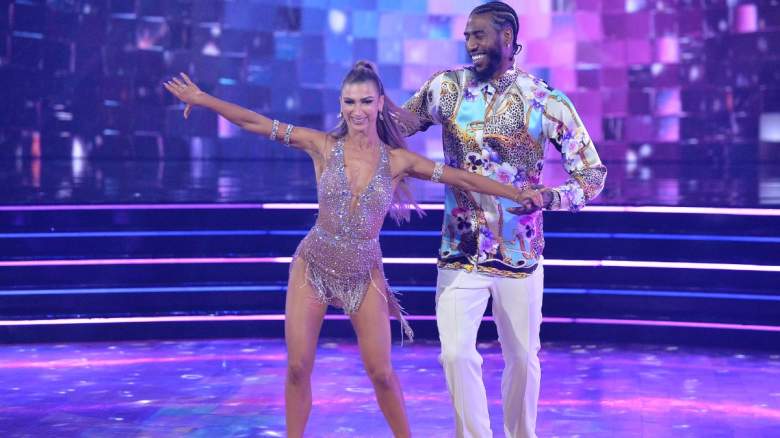 Professional dancer and Dancing With the Stars winner Daniella Karagach competes on the show every season, but she recently revealed that she still misses some things about professional competition.

Competing in Dancing With the Stars is unlike other parts of the professional dance world, and Karagach shared exactly what she missed about competing in a recent Instagram post.

“The question I often get… ‘Miss the competition?'” she wrote. “To be honest, I miss the process. I miss dancing alongside the incredibly talented couples, dancing at @brooklyndancesportclub, performing in front of an audience that is literally inches away from you and experiencing that unparalleled energy in the ballroom.”

She added: “There is nothing quite like it. I really miss that.”

At one point in the video, the couple almost share a kiss before continuing their dance. It ends with the pair laughing together after Karagach appears to be improvising at the end.

In the video, Karagakh and her partner, who is also her husband, professional dancer Pasha Pashkov, dance in a ballroom in a sultry style near other couples.

Sofia Ghavami, another Dancing With the Stars pro, commented, “Inspo for life. My goodness 🔥.”

Others loved the couple dancing together.

“The best! You’re the best in sweats too! Omg! These two!!!!!!! ❤️,” actress and former Dancing With the Stars contestant Kate Flannery wrote in the comments.

One fan agreed, commenting: “Gosh! I can’t with you two. This love, trust and passion that you see between the two of you is so unreal! You can see it in the way you two dance together. This chemistry is so beautiful. ❤️”

Karagach won season 30 of Dancing With the Stars alongside NBA star Iman Shumpert.

The pair were first known for their height difference, which can make ballroom dancing difficult on a technical level, but as the season progressed they became known for their extremely difficult lifts during dances.

In the end they made it and prevailed. Now, Karagach is sharing some raw behind-the-scenes footage of their rehearsal time.

Karagach took to Instagram to pay tribute to her time rehearsing with Shumpert and their practice lifts together.

“Whether I was inspired by videos or something we created ourselves (like the first video you see here), @imanshumpert has always helped me find ways to make our elevators more unique and safe do.” she wrote. “Sometimes we would block cameras and an idea would pop into my head: ‘IMAN, do you think you can grab my neck and throw me off the stairs?'”

She added: “Y’all, I wish you’d seen his face… but he showed up to rehearsals and honestly tried everything that was thrown his way. We tried a few things and filmed them to see if they looked ‘cool’ at all.”

She said if they didn’t look good they would throw the elevators.

“I thought it would be fun to show you a little of our process, so here are some raw videos of the lifts we tried during rehearsals,” she concluded.