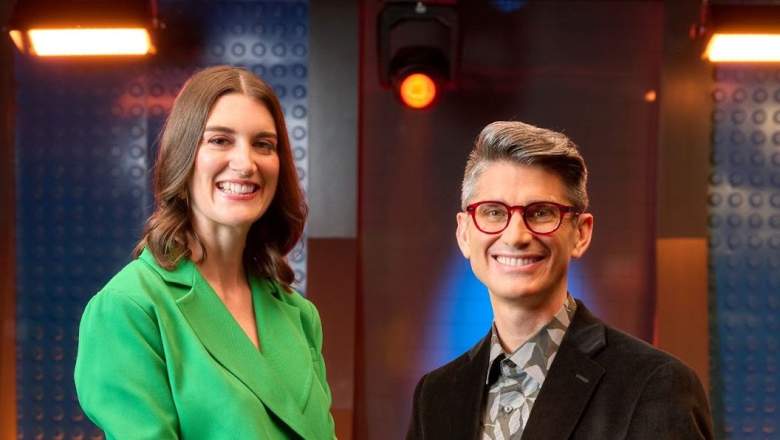 In the teaser trailer for the new season, host Will Arnett told viewers that season three will be the most challenging season yet. Fans can expect to see some of the most ambitious builds yet and a few celebrity appearances scattered throughout the season.

Brickmasters Amy Corbett and Jamie Berard will return to judge the builds and determine the winning team.

Heavy got a chance to chat with Amy and Jamie about what fans can expect from LEGO Masters Season 3.

Heavy: How did it feel judging LEGO Masters Season 3?

Jamie: It was wonderful. It’s actually the highlight of my year. I’m so excited about this because you can go to a strange place, to a studio, cameras everywhere, talented people, Will Arnett, celebrity guests and overwhelming challenges. It really is so much fun.

Amy: It was really great to be back in the studio with twelve brand new build teams. For me, that’s one of the most exciting things. Meeting them, getting to know them and seeing what they do week after week. It’s certainly some mind-blowing creations.

jamie: I think it’s because we had two seasons, so everyone kind of knows what’s going on until they don’t anymore. The third season is good at that [doing]. We say: Expect the unexpected. We’re really trying to celebrate that a lot of the builders trained during the off-season. They think they know what they’re getting into, but we’ll throw them this curveball anyway. We give them the challenge they never thought possible and to see what they come up with is super inspiring.

Amy: We’ve got some really, really wild challenges this time around. We want them to build a tree house in a real tree with no connection points. We have live dogs in the studio and we want our teams to replicate them. We also have a wrecking ball in there, so there’s destruction. We really push our teams to the limit, and like Jamie said, these are challenges that will have you sitting at home thinking, “There’s no way the teams are going to pull this off.” Trust me, that’s what the teams thought when we gave them the challenges, but they did. They did amazing builds.

Heavy: What would you say was the biggest challenge as a judge this season?

Jamie: The challenging part is that we all love teams. Especially this season. You are [going to] fall in love with her We have mother-son combinations. We have grandpas. We have brothers and sisters. We have colleagues who get together. They’re just nice people who are super talented. So our job, unfortunately, is to find the best of this group, which means some of these people end up going home. I have to say this season in particular is real. When you see us emotionally on TV, that’s pure emotion. We just couldn’t hold back because I think you not only appreciate the talent of the builders, you really appreciate it [also] the talent of them as people. she [are] simply really likeable, talented people.

Amy: I think as the caliber of builders keeps getting higher, we’re sending people home with really good builds. We don’t send people home because they did a bad job… It’s always hard.

Heavy: What key elements do you look for when evaluating a build?

Jamie: Each of the challenges has something specific that we’re looking for, so that’s very important. It’s really important that the teams try to think about what we’re actually asking for this challenge. Plus, we’re always looking for their creativity, storytelling, and technical skills. They really need to find something that sets them apart.

Heavy: In general, what can viewers expect from LEGO Masters Season 3?

Amy: Lots of creativity awaits you. Lots of laughs because of course Will [Arnett]is back, and he keeps us laughing the whole time… and lots of twists and turns. It’s the wildest season yet.

Jamie: I think you’re just going to see a lot of heart, and that’s what I think makes this show special. Usually [with] Reality TV shows and competition shows, it’s all about trying to get ahead. but [with LEGO Masters]You just see people celebrating other teams in every episode and really putting their heart and soul into everything they do.

You can watch the EXTENDED interview HERE.