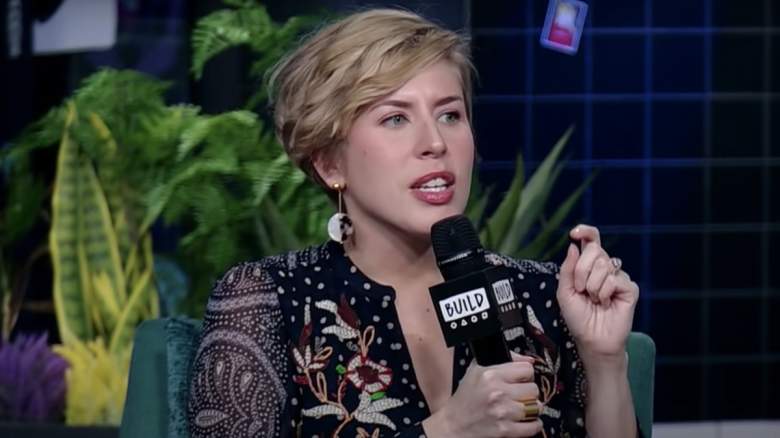 Erin Napier’s four-year-old daughter is her mini-me, the HGTV star revealed on Instagram. She shares Helen and Mae, 11 months, with her husband Ben.

“Isn’t it wild to see yourself as a child being relived through your own children?” The 36-year-old captioned a blurry photo of her daughter running with a pillow. “Helene is me. 4 costumes a day, Pippi and ET, constant music for the soundtrack of her life, a fantasy that creates wild worlds where she can become a leopard or a trapeze artist moment by moment. The talkative, then shy performer, tender as raw cookie dough when there’s a nasty word, marches to her own drum regardless of what the other kids are doing.

As she reflected on what it will be like to raise a younger version of herself, she quipped, “Lord, help us through the teenage years. Amen.” On a perk, though, her husband can now basically watch Erin “grow up since he missed it the first time.”

The couple rose to fame by renovating homes in their town of Laurel, Mississippi in “Home Town,” which is currently in its sixth season. The show’s success has spurred an entire franchise, including Home Town Takeover, Home Town: Ben’s Workshop, and its latest spin-off, Home Town Kickstart.

The Napiers are picky about sharing their children’s lives online, but Erin occasionally offers a glimpse. In February, she revealed Helen’s cute reaction to a badly done braid.

“I can’t do a French braid,” complained the mother of two on Instagram. “I’ve tried and I’ve tried. I watched all the YouTube videos. I can paint and make pottery, but my hands are absolutely incapable of braiding my daughter’s hair.”

She continued: “After trying for 30 minutes I had done this and was extremely frustrated. Helen asked to see a picture of it and I showed her this. She jumped so easily, raised her hand to touch her, smiled widely and said, “Oh mommy, you did such a good job. It’s still pretty.” And my eyes watered and I told her I’d take it out if she didn’t like it and she said, ‘No! I love it. It’s a French braid. You’re a good mom.’”

The graphic designer revealed that her eldest daughter has suffered some setbacks in 2021. While reflecting on the year in an Instagram post on New Year’s Eve, she wrote, “Helen turned 3 with the new year, broke her leg, had surgery, healed and being kept alive continues.”

And while Helen was promoted to big sister, a role in which she “thrived,” the family also lost their 12-year-old dog, Baker. While Erin noted that Helen was handling death like a “big girl,” she later revealed on Instagram that “every time Helen gets tired and emotional, oh she crushes us!”

In one video, the four-year-old cries: “Now I don’t have a baker anymore and now I’m just lonely without a friend at home.”

The parents found a solution, writing “Meet the new Baker!” alongside a photo of Ben holding a furry puppy.

CONTINUE READING: Will Houses With History return in Season 2?