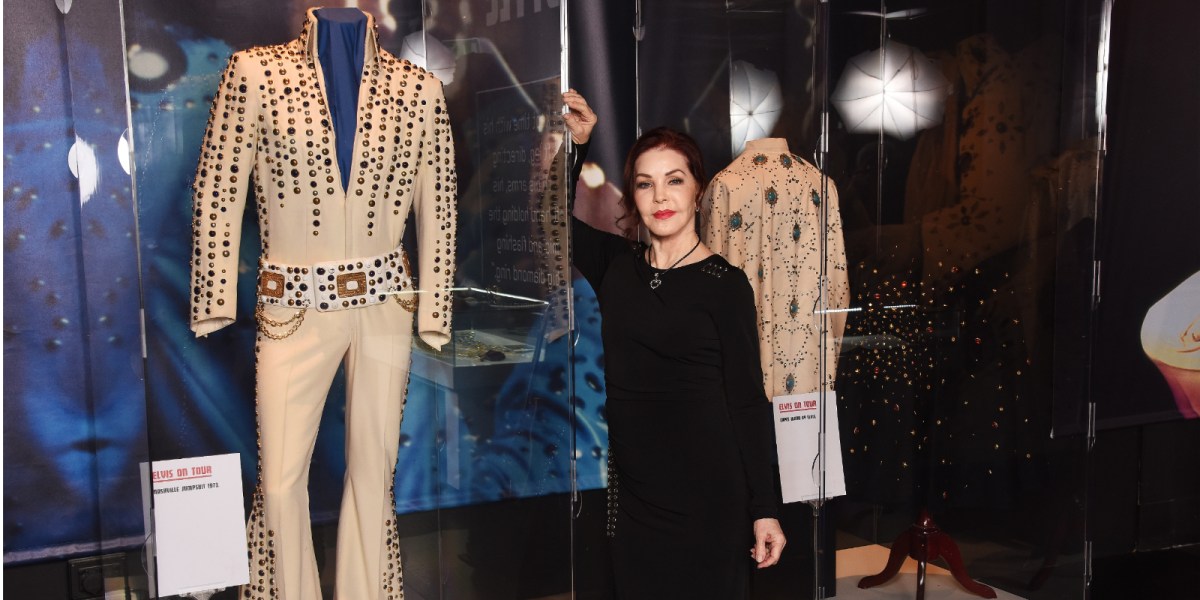 Priscilla Presley has many fond memories of living with her husband Elvis Presley at Graceland, his home in Memphis, TN. Although Elvis understood how fans reacted to his music and films throughout his life, he wondered if his legacy would endure. Priscilla once admitted, “Elvis never thought he would be remembered after his death.” How wrong he was.

Elvis met Priscilla while stationed with the US Army in Germany. She was just 14 and Elvis was 24 years old. He served in the military in Bad Nauheim, where Priscilla’s stepfather and family were stationed.

After Elvis returned to the States, he and Priscilla remained close and maintained a long-distance relationship. Her parents agreed that Priscilla could move to Memphis to be closer to Elvis as long as she finished high school.

In 1963, at age 17, Priscilla came to Tennessee and lived with Elvis’ father, Vernon, and his wife, Dee, in a nearby house. After that, she quietly moved to Graceland. Priscilla’s parents asked Elvis to eventually marry their daughter. However, this marriage did not take place until 1967, four years after Priscilla’s arrival, when she was 21 years old.

Elvis and Priscilla welcomed their only daughter, Lisa Marie Presley, a year later. The pair were the pinnacle of rock ‘n’ roll royalty throughout their marriage, which ended after six years in 1973. However, Elvis always had longevity in mind in the fickle music business. He once confided to Priscilla that he didn’t know if he would be “remembered” after his death.

“Elvis never thought he would be remembered. That was his thing,” Priscilla said in an interview with The Guardian. She said that statement stuck with her even after Elvis died in 1977.

“He said, ‘You know, once I’m over, no one will remember me,’ and that stuck with me… [throughout his fame] he was always asking, ‘How long is this going to take?’” Priscilla admitted.

Elvis’ father, Vernon, methodically categorized everything Elvis touched, signed, or received from fans because Elvis feared being forgotten. His office, located in a separate building in Graceland’s backyard, contained many important family treasures. Many of these are currently on display at Graceland.

Priscilla took over as executor of Vernon’s estate after her father-in-law’s death. Lisa Marie remained the sole heir to the estate. She and Joseph A. Hanks, along with the National Bank of Commerce in Memphis, administered Elvis’ estate until Lisa Marie turned 25 on February 1, 1993, when she inherited the trust.

After leaving the courthouse hand-in-hand on the day of their divorce, Elvis and Priscilla have remained very close. She would have other significant relationships and another child, a son Navarone Garabaldi, with Marco Garabaldi in 1987. Elvis would have a long relationship with Linda Thompson and would become engaged to Ginger Alden.

In the end, however, neither of them ever remarried. Elvis and Priscilla shared custody of Lisa Marie, who was at Graceland on the day of her father’s death in August 1977. Priscilla told Entertainment Tonight how she received news from his longtime road manager, Joe Esposito, that he had passed away.

“My sister and I went out on an appointment. She kept me on my feet as I picked her up,” Priscilla recalled. “Dad called and said Joe Esposito was trying to reach you and talk to you. I thought of my daughter first because she was visiting and was supposed to come home that day because school started.”

Priscilla later learned the news of Elvis’ death. The family sent a plane to pick up Elvis’ ex-wife and take her to Memphis, where she was reunited with the family and Lisa Marie.