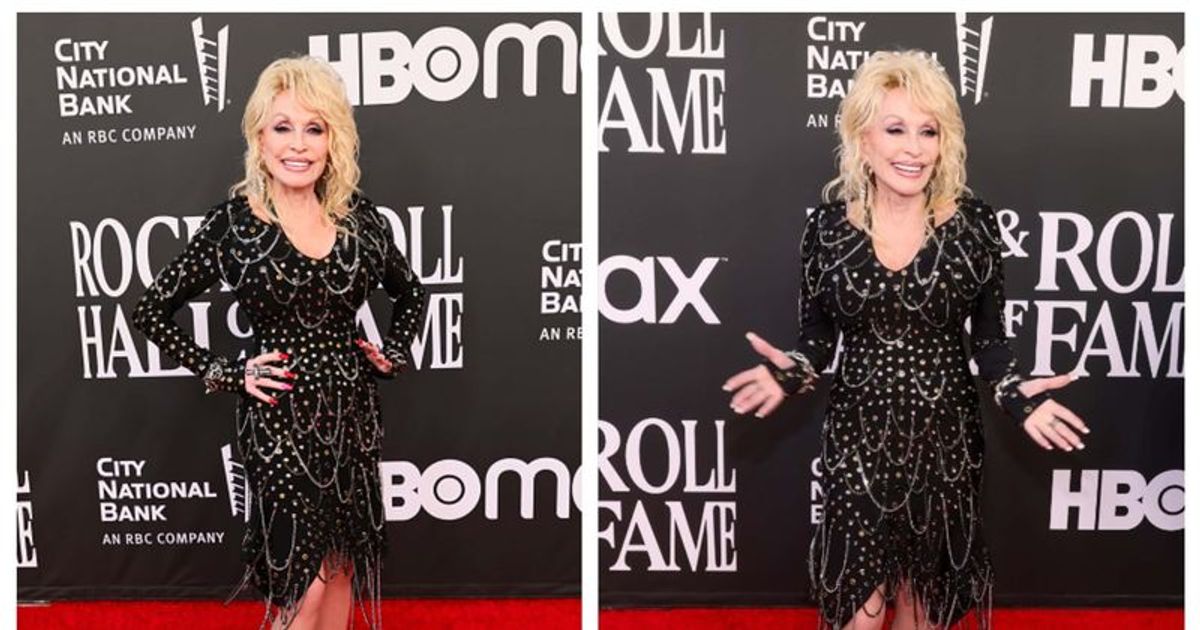 LOS ANGELES, CALIFORNIA: Dolly Parton made a stunning appearance when she arrived at the 2022 Rock & Roll Hall of Fame ceremony in Los Angeles on Saturday night, November 5, in an embellished short dress. Parton had a notable songwriting career before her and released her first album Hello, I’m Dolly in 1967. The icon soon rose to fame after releasing a single “Joshu” in 1971 and continues to be a legendary artist in the music industry.

The 76-year-old country singer wore a dazzling bodycon dress with silver embellishments hanging from the black attire. She opted for her signature blonde locks that were left loose to fall just below her shoulders. Parton opted for pointy platform shoes with transparent material to the top. The music icon appeared in high spirits as she flashed a healthy smile for the cameras.

The evening’s musical participants such as Pink and Olivia Rodrigo also opted for darker hues along with the ‘Jolene’ singer for the star-studded red carpet appearance. The grand event was held to induct a total of 14 new artists into the Hall of Fame including Parton, Eminem, Duran Duran, Pat Benatar and Lionel Richie.

The ‘I Will Always Love You’ hitmaker has received 11 Grammy Awards and 50 nominations over the course of her decades-long career. The singer was inducted into the Country Music Hall of Fame in 1999. However, after her nomination, she was somewhat reluctant to join the Rock & Roll Hall of Fame. “Although I’m extremely flattered and grateful to be inducted into the Rock ‘n’ Roll Hall of Fame. I don’t feel like I’ve earned that right,” she said, as reported today.

Despite Parton’s objections, Rock Hall continued with the voting process. “Rock ‘n’ roll has had deep roots in rhythm & blues and country music since its inception. It is not defined by any particular genre, but rather a sound that moves youth culture. Dolly Parton’s music influenced and impacted a generation of young fans Countless artists followed.” replied Shauna Wilson, communications director for the Rock & Roll Hall of Fame Foundation. Parton then gracefully accepted the nomination, calling himself “rock star” in an interview, according to LoudWire.

Following her rock star reference, Parton exclaimed, “I’m a rock star now!” as she accepted the Rock Hall honor. “I want to thank the Hall of Famers and everyone out there over the years. I’ve been doing this my whole life and I love it. I’m very honored,” she continued, according to UCR.

Earlier this year, the artist promised her fans a rock album in hopes of being picked up. “I don’t expect to come in. But if I do, I have to put out a great rock ‘n’ roll album immediately next year – which I’ve wanted to do for years, kind of like Linda Ronstadt or Heart. That was maybe just a wink for me to do that,” she said.