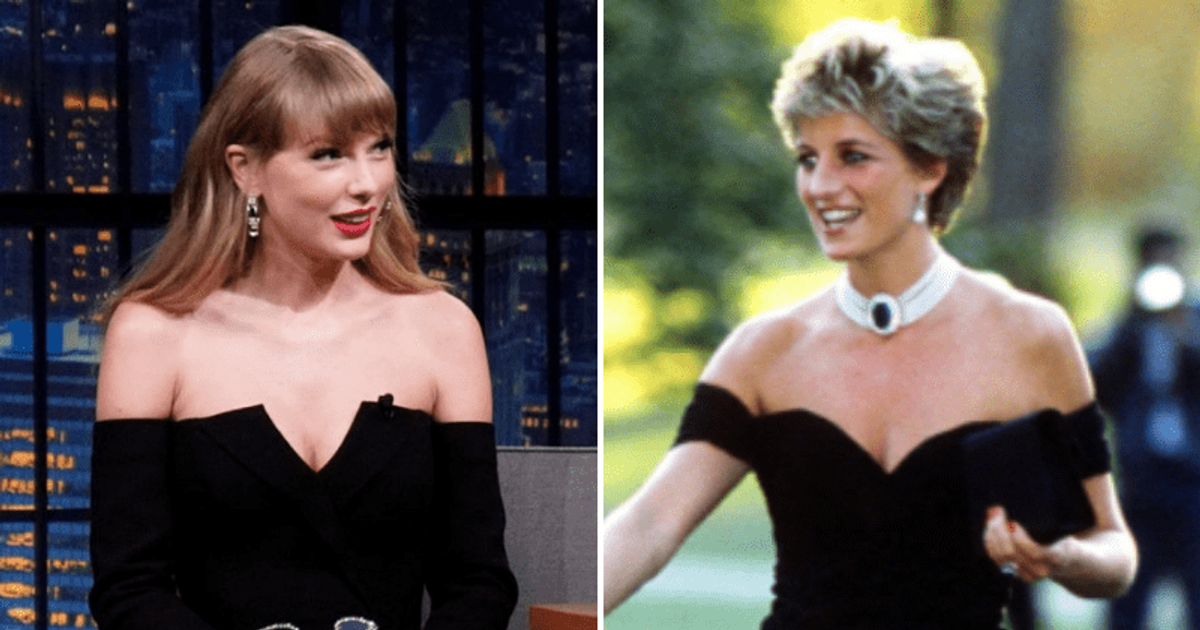 Taylor Swift, 31, made comparisons to Princess Diana during an appearance on “Late Night with Seth Meyers”

Taylor Swift raised her eyebrows after seeing her on Thursday evening the 11th.

The 31-year-old ‘Blank Space’ hitmaker drew comparisons to the late Royal during an appearance on Late Night with Seth Meyer’s when she flaunted a strapless mini dress with a notched neckline and crystal embroidery. She was on the late show to promote the re-recording of her 2012 album Red, and her resemblance to Prince Williams’ late mother was undeniable. While their dresses showed striking similarities, the 11-time Grammy winner chose not to wear tights or a pearl necklace, as the Princess of Wales did at the sensational Vanity Fair party in 1994.

The “revenge dress” was one of Diana’s most talked about looks of all time after she wore it shortly after her ex-Prince Charles admitted to cheating on her in an interview with Jonathan Dimbleby two years after their breakup. This led Swift fans to believe she was sending a message to ex Jake Gyllenhaal or Scooter Braun, but the pop star was quick to debunk the theories. She was asked by Access Hollywood the next day if the dress had any hidden connotations. “Oh my god, that’s not – I just liked the dress,” she replied. “I liked the black dress,” she added to the reporter at the All Too Well premiere in AMC Lincoln Square on Friday, November 12th.

Although Swift made it clear that she didn’t want to shadow Gyllenhall with her dress on, she was open about her heartbreak in her new film after their breakup in 2011. The film lasts 13 minutes and includes new lyrics from the expanded version of All Too Well, suggesting that their nine-year age difference was certainly a factor in their breakup. “You said that if we had gotten older, maybe December 2010 would have been okay.

Meanwhile, other lyrics suggested the breakup was particularly tough for the ‘Wiltest Dreams’ hitmaker. “They say everything is fine, it ends well, but I’m in a new hell / every time you come to my mind,” the text reads. Gyllenhaal doesn’t seem particularly against age differences, however. The “Donnie Darko” star has been linked to the 25-year-old French model Jeanne Cadieu, who is allegedly 15 years younger than him, since the end of 2018.

Swift’s re-recording of Red includes six other unreleased songs. According to a review of the album on The Sun, one of those numbers is called “I Bet You Think About Me” by Gyllenhaal. “You can’t help who you fall in love with, and you and I fell like spring snow. But reality has crept in, you said we are too different,” the text reads. The nameless lovesickness is also accused of having “laughed at my dreams” and “rolled his eyes at my jokes”. Swift continued to mock the subject of her song, singing, “Mr. Superior Thinking, do you have all the space you need?” adding, “I don’t have to be your psychiatrist to know you’ll never be happy and I bet you think of me.”