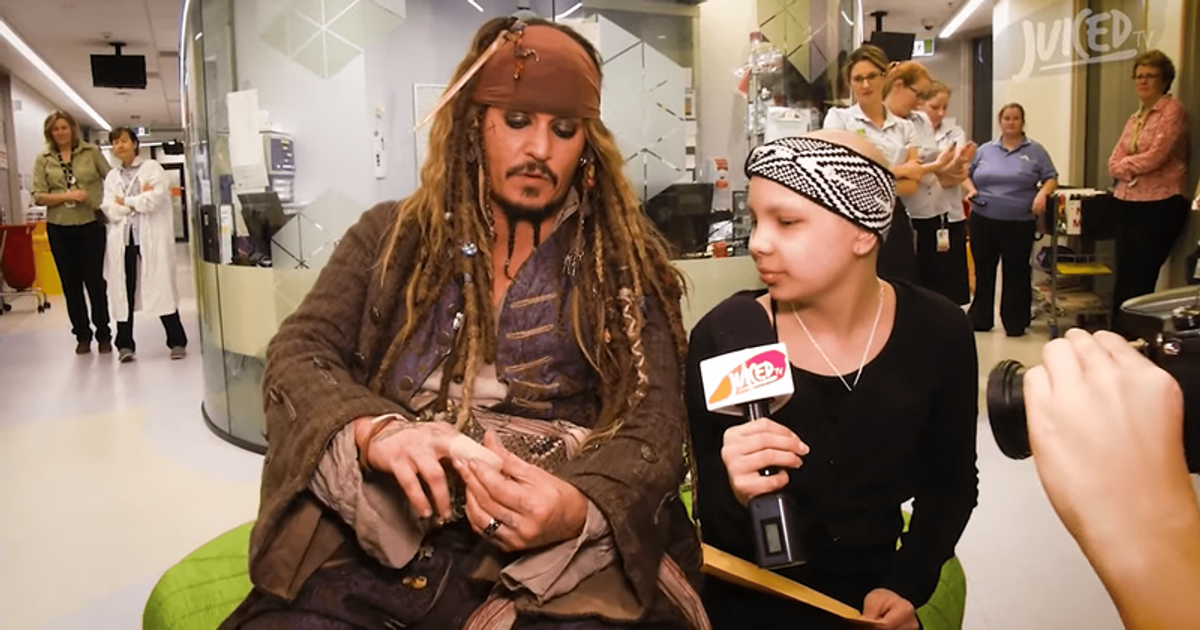 As the defamation trial and legal battle between Johnny Depp and Amber Heard unfolds, old videos of the actors are resurfaced and going viral. One such video shows the 58-year-old actor joking that he ate the tip of his injured finger. The 2015 clip shows the actor, dressed as Pirates of the Caribbean’s Captain Jack Sparrow, visiting children with cancer at an Australian hospital.

When a kid saw Depp’s finger wrapped in a bandage and asked. “What happened to your finger?” He replied: “My finger? I hurt him very badly. I ate him. I bit him off. After hearing that, the kids giggled and Depp quipped, “I was, I was starving. I bit my finger, I ate it! The top of it, just a little bit. The nail was not good.”

One commented: “My heart just broke when I saw this. The kind of pain he has to be in and not just the physical pain but the emotional pain and still being able to visit those kids really says a lot about the kind of person he really is . He really deserves justice.” Another said: “The guy just lost his fingertip and he’s still visiting kids. Does that look like a woman beater? No!! #JusticeForJohnnyDepp.” A third wrote: “He doesn’t explain how he got his bruise and instead prefers to lie about eating his fingertip. He was in severe pain emotionally and physically. #justiceforjohnnydepp.”

One user joked, “I wish he’d said, ‘A horrible slimy creature from the bottom of the sea attacked me, I called it Scamber’.” Another added, “Oh Johnny! I can’t imagine what you’ve been through! You always find your happiness and never have to deal with heartbreak and misery ever again.” A third replied, “Wow so crazy you never know what someone is going through. I remember him coming up here in Cleveland and he was always stopping and Took pictures with people and talked to them after he finished filming. Such a lovely person.”

While one user wrote: “You won’t hear Amber Heard’s attorneys mention this in court. Johnny Depp visited Lady Cilento Children’s Hospital in Brisbane, Australia with children suffering from cancer… 3 months after Heard severed part of his finger. Depp stayed over 6 hours visiting 70 kids,” commented another, “saw a video of Johnny Depp as Jack Sparrow explaining to a kid why his finger was all bandaged. He said he got hungry and ate the top of it. So at one of the lowest times in his life, he still went to a children’s hospital to make her happy. Use this as a character witness.”

Another old video that has surfaced shows Depp giving a red carpet interview looking very scared and uncomfortable while Heard is standing next to him. Depp sued Heard after she claimed in a Washington Post op-ed that she was a victim of domestic violence. Although the article didn’t name Depp, the actor claims it ruined his reputation and career. Heard then sued him for $100 million and submitted photos of her injured face claiming Depp was responsible.