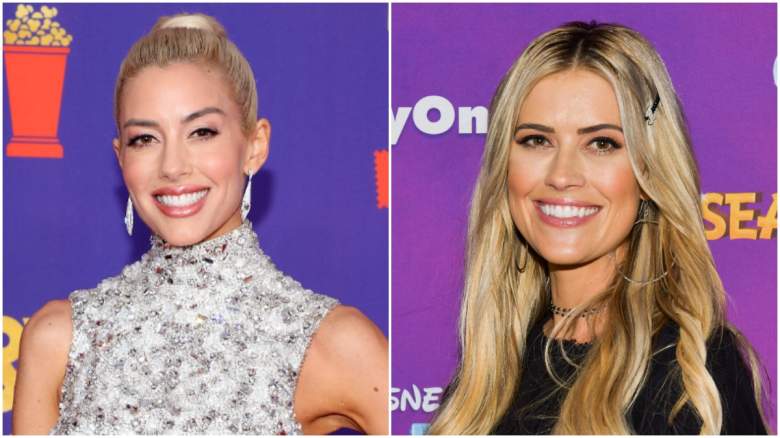 Tensions ran high between Christina Hall and Heather Rae Young, wife of Tarek El Moussa. Daily Mail published photos of what appeared to be an argument between the women, who were joined by their spouses at a football game on May 7, 2022. The couples were there to support Hall and El Moussa’s children Taylor, 11, and Brayden, 6.

In some photos, El Moussa can be seen pulling away the Selling Sunset star on her arm. Following the altercation, Hall’s husband appears to be confronting Josh El Moussa before being separated from youth football coach.

The couples released a joint statement about the experience, telling E! News: “A personal matter was discussed and has since been resolved. We are focused on parenting together as a team to move forward.”

Hall and El Moussa rose to fame through HGTV’s “Flip or Flop,” which broke up in 2016. The ‘Flipping 101’ star married Young in October 2021. Hall is currently embroiled in a custody battle over their youngest son Hudson, 2, with ex-husband Ant Anstead. News broke that she secretly married Josh in 2022.

Hall and Young’s interaction has been a long time coming, according to new details obtained by E! News.

“Heather and Christina have not been getting along recently and there has been general tension between both couples,” a source told the outlet. “Christina feels like Heather is pushing her boundaries when raising her kids, and Heather doesn’t feel like she gets enough respect from Christina.”

The insider added that Young “does a lot for the kids” and the couples are hoping “the worst is behind them.”

Us Weekly reported that Hall and Young usually keep their distance. “Christina usually only speaks to Tarek when it comes to the kids,” an insider told the publication. “She accepts Heather taking on the role of stepmother but has this animosity towards her.”

They all bonded just a day later when Brayden had a medical emergency.

“Scary 12 hours for us parents + stepparents,” the Christina on the Coast star wrote on Instagram. “Upon admission to the ER earlier this morning, Brayden underwent an emergency appendectomy and Meckel’s diverticulum removal. There is nothing quite like seeing your child in excruciating pain. Luckily the surgery went well and he is recovering and in good spirits. All of the staff at Mission Hospital have been amazing and we are all grateful that it was recognized early.”

Hall later added on her Instagram Story: “Stressful 24 hours but a good reminder of the importance of teamwork/co-parenting. We’re all under pressure but when it really counts we’ve all been there for Brayden and played our part. Sometimes a scary situation can be a good wake up call. In the end everything else is just ‘noise’, what counts are the children.”

Young also took to her Instagram Story. She wrote: “We all stuck together as a family during this stressful time. The children will always come first for all of us!”