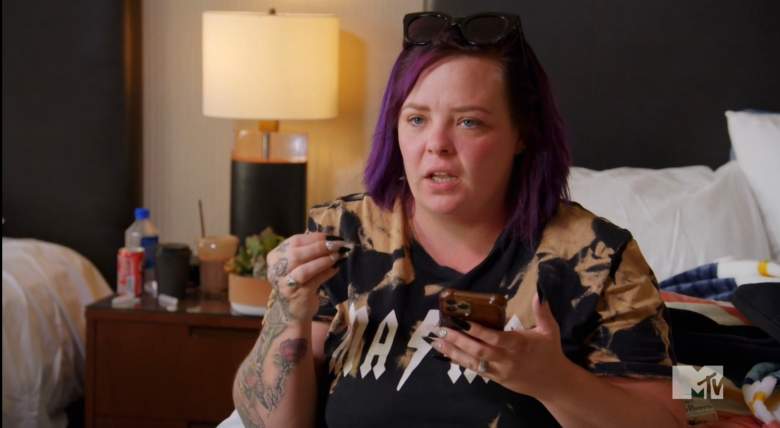 On the same day, Ashley Jones, 25, spat at Briana DeJesus, 28. But Lowell, 30, said the two incidents were unrelated.

“My panic coming up on ‘Teen Mom: Family Reunion’ tonight had NOTHING to do with the fight that happened!” she wrote on Instagram Stories. “It had to do with opening up old traumas and bringing old wounds to the surface!”

Lowell missed her husband, Tyler Baltierra, who was not invited to the spin-off.

“Tyler is literally the only person who has put me through all of my mental health issues,” she told an MTV camera. “He can literally throw me off edges that sometimes I can’t talk myself out of.”

MTV then cut to an old episode of “Teen Mom OG,” where Lowell was being treated for her mental illness.

“Something just isn’t right,” she said in the flashback. “I’m on my way to the airport because I’m going for treatment, because I’ve thought about every single way I could kill myself today.”

During a phone conversation with her husband, Lowell said she’s having a “rough day” with her anxiety because “various wounds” are being reopened.

“Telling my mom I’m tired of feeling like the perfect kid. And I’m sick of you thinking I don’t have a voice and an opinion of my own. I never told my mom those things, so I think maybe some of that fear comes from there as well,” Lowell explained during a confessional.

Baltierra boarded a flight to be there for Lowell, life coach Dr. Cheyenne “Coach B” Bryant said she suffers from “debilitating” anxiety.

“I woke up this morning with a really bad anxiety … and mine is literally like debilitating like there’s nothing I can do.”

“You were obviously triggered,” Coach B told her. “Triggers bring us back to the beginning of the wound.”

Brockmiller, who was there for Lowell’s chat with Lowell, admitted that growing up her daughter, she drank alcohol every day.

“I feel like I’ve had panic disorder since I was a kid,” Lowell said. “And I have forgiven you for those things. It’s just yet to come.”

According to the National Health Service (NHS), panic disorder is a type of anxiety disorder in which people “regularly have sudden attacks of panic or anxiety.”

Although it’s typical to experience panic or anxiety at times, someone with panic disorder can become overwhelmed “at any time, often for no apparent reason,” says the NHS.

Lowell and Baltierra gave their first daughter, Carly, up for adoption when they were 17. It was filmed in 2009 for her episode of 16 and Pregnant.

Lowell recalled being “terrified” of the future during this time.

“I just remember the initial fear and great fear,” Lowell told E! News in 2021. “The fear is that I think I have nothing. I didn’t even have a cell phone back then. I didn’t even have my driver’s license. I didn’t have a car. My mom and Tyler’s dad were also pretty dependent during this time.”

“The first was just really scared and scared,” she continued to E! News. “Afraid of what I’m going to do?”