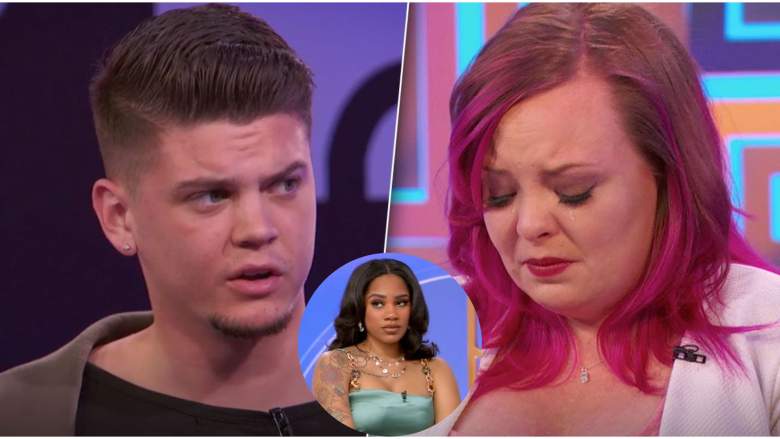 Catelynn Baltierra was drawn into the Ashley Jones and Briana DeJesus feud after Jones claimed that everyone in the cast knew about her pregnancy.

On her podcast I Need Wine, Jones claimed she privately told everyone she was pregnant. However, DeJesus claimed that she only found out after they were sent home from filming Season 2 of Teen Mom: Family Reunion in Bend, Oregon over arguments.

Jade Cline issued a statement on social media defending DeJesus and leaked some texts from their private group chat. Baltierra’s comments have been recorded.

“I don’t remember you giving birth to Ashley allen,” Baltierra wrote, according to Cline’s post. “I know I knew but nobody else because it wasn’t my job to tell anyone else. They didn’t make a group announcement.”

Echoing Baltierra, Cheyenne Floyd wrote, “Ashley told me she was pregnant off camera and I haven’t told anyone. It wasn’t my place to say that. The group didn’t know.”

“Don’t sit here and lie on ppl. None of your stories add up and frankly I’m sick of your cops ***,” she said. :You’ve been doing this for years and I’ll be damned if I’m going to sit here and watch you play the victim after you’ve pulled that shit.”

It wasn’t just Cline who shared screenshots of the group texts. Jones has also posted messages sent to her directly from Baltierra.

“What’s up?!? I honestly thought only me and Chey knew you were pregnant,” Baltierra wrote.

“I’ve had one-on-ones about my pregnancy with every single girl at TMFR except Jade and Bri,” Jones replied. “I was also told by the production that everyone, including the cast, knew, for safety reasons.”

“I really don’t think anyone knew about the pregnancy except me and Chey unless you told other people,” Baltierra added.

While the “Teen Mom” ​​cast appear to have sided with DeJesus and say that she and Cline were unaware of the pregnancy, Jones said otherwise on her podcast.

“Let me just say this: I don’t feel the need to share with you what’s going on with my pregnancy because it’s my pregnancy whether you like it or not,” she added. “I just feel like that was pretty damn weak. You’re not trying to weaponize someone’s pregnancy. She could have made her point without saying that.”

DeJesus took to Twitter, where she made a comment about Jones’ husband, Bar Smith, who was incarcerated.

“She was worried about my sex life when she should be worried her husband is someone in a cell smh but still sis I’m tired… I need a break 😂😂😂😂 send help sos” , DeJesus said.

To find out what happens next, don’t miss “Teen Mom: The Next Chapter” when it airs Tuesday at 8:00 p.m. ET on MTV.