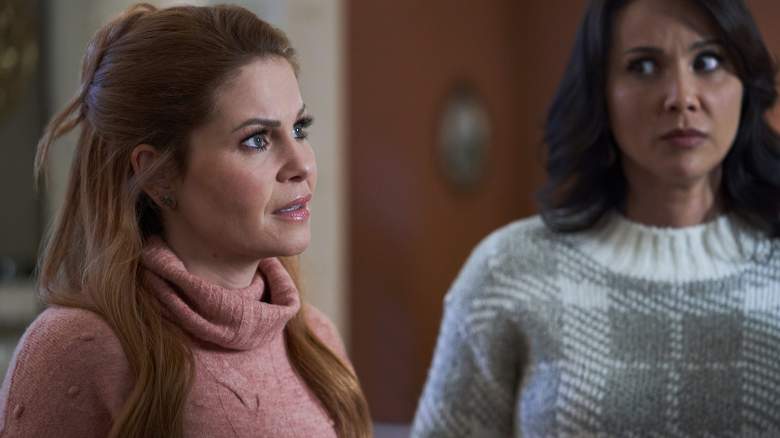 As Hallmark fans turn their attention to new Christmas movies premiering in October, quiet news has surfaced about a popular mystery series. In a recent interview, Candace Cameron Bure hinted that her Aurora Teagarden series might one day make the transition to Great American Family.

In an interview with Variety, both Bure and Bill Abbott said they hoped mystery series Aurora Teagarden could one day make the move to Great American Family (GAF). The series previously aired on Hallmark Movies & Mysteries.

Abbott told Variety: “The world she created around Aurora Teagarden was very special and certainly something we would love nothing more than to do more of.”

Bure added: “It’s about putting the pieces of the puzzle together, but it’s very possible.”

In a separate interview with Variety, Bure expanded on her response, saying, “It’s open. It’s definitely something we’d love to revisit for Great American Family. It’s about putting the pieces of the puzzle together, but it’s very possible.”

Hallmark ceased production of the Aurora Teagarden series after Bure left the network to join Great American Media in an executive capacity. When Bure first announced her new deal with Great American Media, an unnamed representative from Crown Media (now Hallmark Media) told Us Weekly that while existing Aurora Teagarden films are still airing, they have “no plans for new ones.

At the same time, Variety reported that “multiple sources” told them there were no new plans for more Aurora Teagarden movies.

Hallmark hasn’t officially announced that the series is being canceled, and Bure’s interview with Variety is one of the first times she’s spoken out about the series since leaving Hallmark. Hallmark Media’s only official statement to Variety: “Crown Media has worked with Candace for over 10 years. We respect her decision and thank her for her many contributions.”

There’s more to Bure’s deal than just starring in Great American Family films. She has taken on a managerial position in the company.

When Bure first announced her contract, a GAF press release described that Bure was “taking prominent leadership roles at the company to oversee and curate programming for the networks as a whole.” A large part of her role was creating “year-round seasonal celebration content for the networks” and playing “a key role in the company’s annual Great American Christmas franchise.”

When Heavy reached out to Great American Media to confirm whether or not Bure’s deal was exclusive, a representative told Heavy that Bure’s leadership in curating content was the most important part of her announcement.

In contrast, Danica McKellar has an exclusive deal with GAC Media that covers rom-com movies and vacation movies. As Heavy previously reported, McKellar said she would happily return to Hallmark to do more MatchMaker Mystery movies if they wanted them.

When asked about her mystery films on Twitter, McKellar wrote, “They decided last summer to stop making them, along with many others! 🤷‍♀️ Let them know how you feel; I would like to do more mysteries – many of us would. 🤗.”