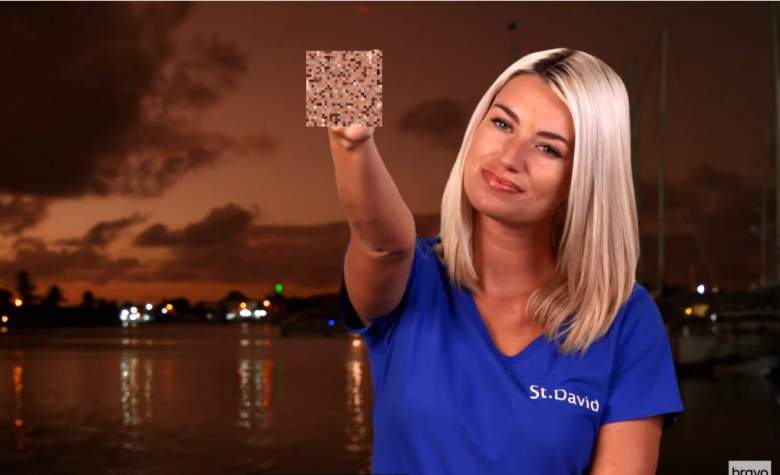 Camille Lamb is back on Below Deck a week after being fired by Captain Sandy Yawn for drinking while on the job – among other offenses – during the season.

Lamb returned to Below Deck on the January 23 episode of Season 10.

She is shown approaching Sailor Ben Willoughby. The two had a romance during the season. They hug and Willoughby says to her, “You look damn good.” They then hold hands and go to a restaurant together. The crew members look surprised to see her. “Oh god,” says chef Rachel Hargrove.

The next clip shows Lamb in a confessional. She is wearing a blue St. David crew shirt and is pointing her middle finger at the camera.

It’s not clear what happens next. Willoughby tells the Bravo camera: “F*** me. That’s crazy.”

“All crew, all crew. I have an update for you,” Yawn teased over the speakerphone.

Lamb was fired from Yawn on the January 16 episode after chef Fraser Olender caught Lamb drinking a “small glass” of the guest’s champagne.

“For me, I’m tired of hearing from Camille,” Yawn said. “She is the common denominator in all of this. Great girl, great personality but at the same time we have to do what is best for the boat.”

Below Deck fans on Reddit wondered if the preview meant Lamb had been rented back from Yawn.

“Camille is back? Watching this show is agony,” one wrote.

“When COURSE camps Camille in a hotel room on St. Lucia! Ben is a trailblazer and she doesn’t have the final say,” said another.

Others surmised that the edit made it appear that Lamb had returned to the boat but was only there for one night. “I think Camille just shows up for dinner,” they said.

A majority of fans were concerned that Yawn had an issue with Olender.

“I mean, there’s three of you and the deck crew is going out of their way like they’re constantly taking all the junk out,” Yawn Olender said in the teaser.

“I know you feel good and safe here, but if you create a crab on the boat … the fish stinks on the head and right now you are the head,” Yawn said in another scene, though it wasn’t clear who he was with who she was talking to.

Lamb issued a statement on social media after the episode aired, in which Yawn sent her home.

“I won’t let this narration be the narration,” she began loudly screenshots received from The Food Barbie on Twitter.

Lamb claimed that everyone was drinking the day she was caught drinking and claimed she was unaware that the champagne she opened was not for the crew. “I’m not a champagne snob, so I didn’t know its value,” she said, according to The Food Barbie screenshots.

Lamb said she was ready to go — that she wasn’t thrilled with the job — but she denied being lazy.

“My achievements in life so far are not the achievements of a lazy person,” she continued. “I will continue to be responsible for my actions without shame because at the end of the day I grow from them.”

During his appearance on Bravo’s Watch What Happens Live with Andy Cohen, Olender agreed it was time for Lamb to go home. “It had to be done,” Oldender said. He was glad Yawn had agreed to fire Lamb because he “needed that support.”

Below Deck airs Mondays at 8 p.m. ET on Bravo.