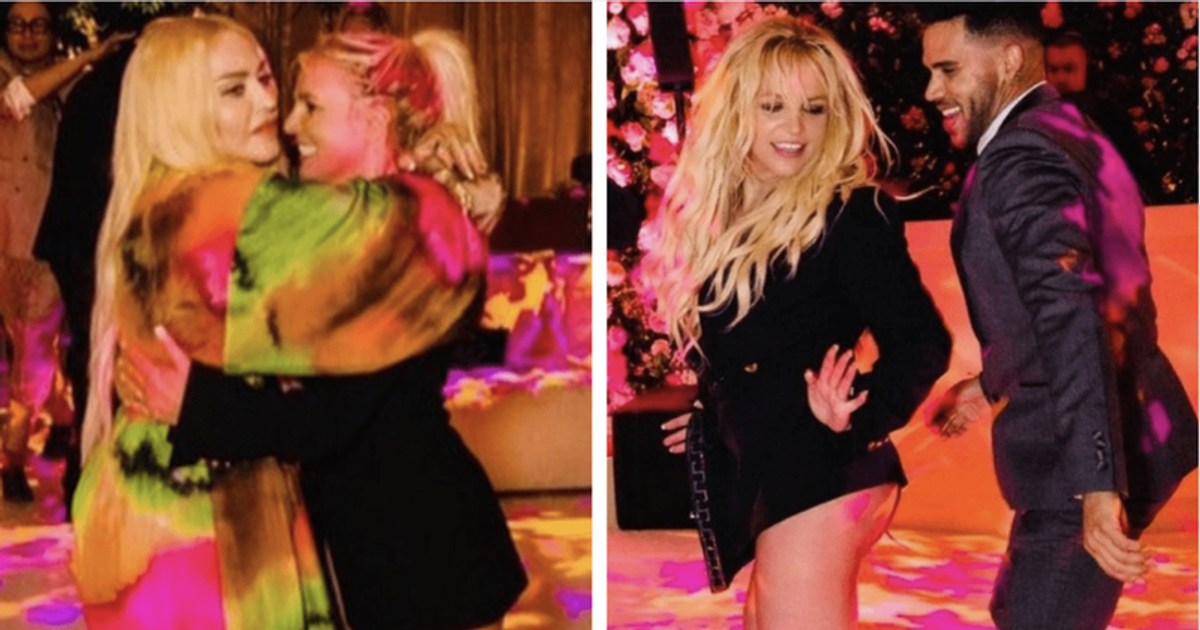 Britney Spears and Sam Asghari tied the knot on Thursday, June 9 in a private ceremony attended by some A-list celebrities and Britney’s closest family, i.e. her brother. The event seemed delightful and the couple were overjoyed at the occasion. Britney rocked a custom made Versace dress and the singer couldn’t look happier. She celebrated the wedding with a video of her and Sam dancing the night away.

The 40-year-old singer took to her Instagram to share a short video reminiscing about the night. She is seen dressed as a bride, kissing Sam, dancing with Madonna, and then performing a little celebratory dance with her husband. She captioned the post, “LIFE IS GIVING…pssss don’t worry I had my first diamond thong under my jacket…hope I didn’t offend anyone!!!” In that caption, she reveals the diamond thong she’s wearing. Again, she wears a black Versace blazer dress that doesn’t cover up as much as one would hope. Well, maybe that’s the point.

Who came to Britney Sam’s wedding?

While Britney sported an adventurous look, Sam, 28, walked to the reception wearing a t-shirt that read ‘Britney & Sam’, with a coat that soon fell off of him. After all the conservatory drama Britney had been through, she didn’t want to invite her family. Her sons Sean Preston and Jayden James also chose to stay away from the wedding. On the other hand, her first husband, Jason Alexander, crashed the wedding, causing a scene and was charged with vandalism, trespassing and two battery assaults.

Britney was careful not to invite people she didn’t like or don’t want. Of her immediate family, only Bryan Spears, her brother, was present. Other than that, the couple has been surrounded by people who love and appreciate them, including some Hollywood A-listers. Some of the names are Drew Barrymore, Paris Hilton, Selena Gomez, Madonna, Kate Hudson, Kathy Hilton with husband Carter Reum, Donatella Versace and Gwenyth Paltrow.

Appreciating her guests, the pop singer revealed some information in her Instagram post. She called Drew Barrymore her “girl crush” and complimented Selena Gomez, claiming she was “a lot prettier in person.” She also revealed that she kissed Madonna again and “dance the night away” with Paris Hilton. Dynamic duo Britney and Sam met on the set of their music video “Slumber Party” in 2016. After making their relationship public in 2017, they got engaged in 2021.