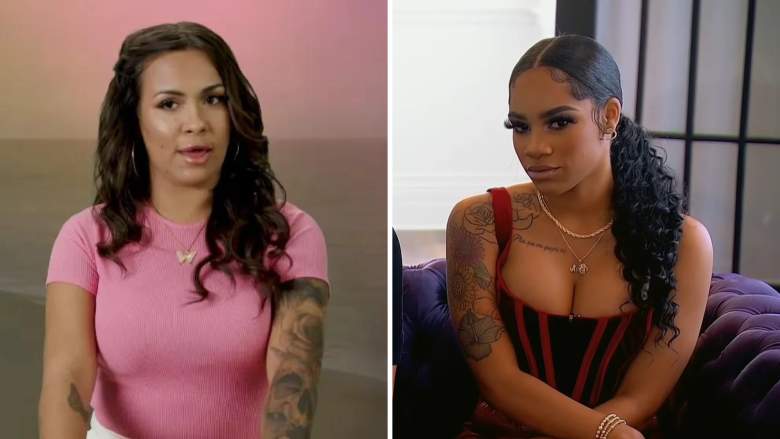 DeJesus and Jones both claim that they were not the aggressor in the situation, but DeJesus said Jones spat at them.

DeJesus denied knowing Jones was pregnant when they got into an argument, although Jones claimed that everyone in the cast knew about her pregnancy.

“Spreading lies can really hurt someone. I’m tired of people thinking I’m the one who caused every kind of mess,” DeJesus wrote in an Instagram story, per Teen Mom Tea. “I never attacked anyone. I never started this fight in Oregon.”

“I’ve never experienced disrespect until a pregnant woman who accused me of knowing she was pregnant but never told me asked me if I wanted to fight. lol makes sense. A high-risk pregnancy at that,” she continued. “Ask for a fight and spit on people. It’s disgusting.”

DeJesus believes the production team “lied” to Jones. She sent Jones a text setting out her theory.

“I just want you to know that I think the production lied to you. They didn’t tell any of the other girls about your pregnancy so they just lied to you straight out,” DeJesus wrote to Ashley, per screenshot shared by Teen Mom Tea.

Jones did not deny the possibility that the production team instigated the fight.

“I’m sure that’s very possible considering this isn’t the first time they’ve lied to me outright,” Jones wrote, per the screenshot posted by DeJesus. “To be honest, I’m so over this whole situation that I’m tired of always being the blame or the aggressor for everything.”

“I won’t be coming to any more cast events or reunions, so I’m hoping that will mitigate all of this drama,” she continued. “I’ve expressed my opinion on my podcast about what I’m allowed to do. Now I would like to continue.”

Clearing the air was important to DeJesus because she didn’t want people to think she tried to fight a woman while she was pregnant.

“You can call me any name in the book but I have to draw the line when you accuse me of doing shit to someone who is pregnant,” DeJesus wrote via Instagram, per Teen Mom Tea. “I would never cross that line. With this I will protect my name at all costs.”

The Ashely’s Reality Roundup was the first to break the news: DeJesus and Jones — along with their moms, Roxanne DeJesus and Pastor Tea — were sent home from Teen Mom: Family Reunion after getting into an argument.

After The Ashley reported the news, the feud spread to social media, where Jones and DeJesus traded jabs. DeJesus even leaked Jones’ pregnancy before she was ready to announce it.