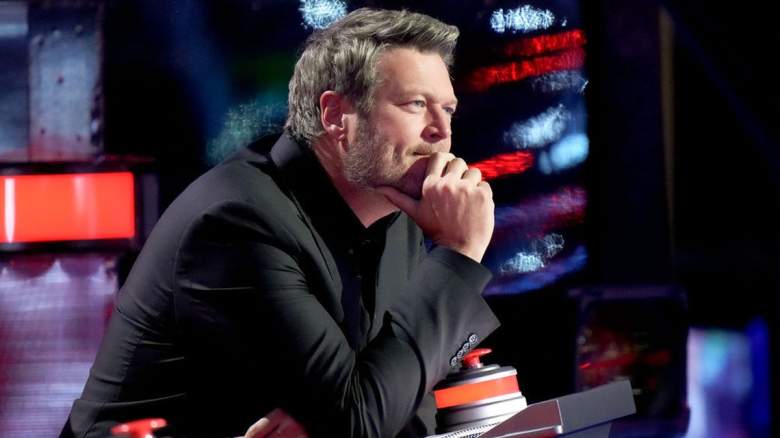 Gwen Stefani recently joked that her husband, Blake Shelton, would probably want a “sack of corn” or soil as a retirement gift when he finishes filming The Voice. But it turns out the country star wants more — and he’s now turning his requests to the cast.

With The Voice season 22 ending in mid-December 2022, Shelton will have one more season before retiring from the show. Season 23, which he has already filmed with returning trainer Kelly Clarkson and newcomers Niall Horan and Chance the Rapper, will mark his final season and will conclude in May 2023.

But he plans the big farewell in advance. During a press conference ahead of the Top 13’s live performances on November 21, 2022, reporters asked what gifts he would like from his castmates to celebrate. Though they won’t be with him in the final season, Shelton had gift ideas for each of his current colleagues.

He began his requests by asking first-time coach Camila Cabello for an SUV.

John Legend chimed in, “That’s actually a good suggestion!” And then he heard the gift Shelton wants from him: a full pallet of his LVE wine.

“A mix of his choice, but no box—a pallet,” Shelton said. According to BinWise, a beverage inventory management company, a pallet holds an average of 56 cases of wine, which equals approximately 672 bottles.

As for what Shelton wants from his wife, he said, “We share everything anyway, so whatever she buys herself.”

So Stefani decided to request something she wanted and eagerly asked, “Can I redecorate the house in LA?”

After looking confused for a moment, Shelton replied, “This is my retirement!”

The Voice host Carson Daly was absent from the retirement gifts discussion, but as the only other original member of the cast, he has expressed how much he will miss having Shelton on the show.

“I hate it,” Daly told Entertainment Tonight shortly after Shelton’s announcement in October. “He and I obviously developed a great friendship on ‘The Voice.’ I’m amazed, but I understand.”

“When we started the show, we had no idea it would be so successful,” Daly continued. “We travel twice a year, which is a lot of work. We’re lucky to have had him for so long because most musicians have to tour. He has business things, we have another show, ‘Barmageddon’, which we did together. So there’s a lot going on for him.”

“Barmageddon” premieres December 5 on USA Network, with Shelton, Daly and WWE star Nikki Bella overseeing bar games with celebrity guests. If the show goes well, he might be able to do more seasons with Shelton, but right now Daly is thinking about how lonely The Voice will be.

“I don’t know who I’m going to eat with now,” he joked. “I just need a cardboard cutout.”

“I’m the last one left to go down with The voice Schiff,” added Daly, predicting the show would outlast him too. “The format of the show is stronger than any of us. It will be there longer than us.”