BEHIND THE SCENES: How celebrity couples surprised the small town by taking over HGTV 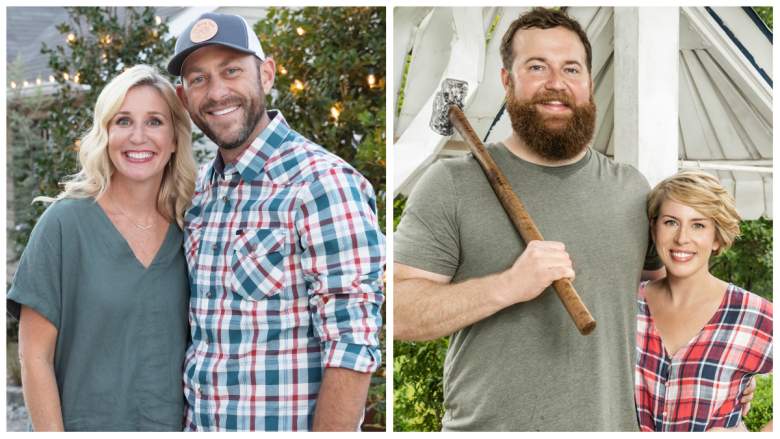 When residents of Fort Morgan, Colorado, were told to turn up for a downtown rally on July 26, they packed Main Street to enjoy a free BBQ lunch and hopefully convince visiting producers from HGTV to to show their little town a future show.

Little did they know that network superstars Ben and Erin Napier were in hiding with another HGTV power couple, Dave and Jenny Marrs, waiting to surprise the city of 11,000 with the news that the second season of “Home Town Takeover” would be filmed in Fort Morgan. The stars are overseeing renovation projects across the city.

The Fort Morgan Times reported that as soon as the famous couples “turned the corner near the Acapulco Bay restaurant…Main Street erupted in celebration.” The Napiers and Marrses took to a stage, with cameras filming the entire scene, and together proclaimed, “You’re getting a ‘hometown takeover’!”

Small towns across America vied for the enviable position that Fort Morgan now holds – but the big surprise didn’t come overnight. In fact, it took over two years to develop.

The Fort Morgan Times reported that in early 2020, local resident Ann Iungerich heard that HGTV was looking for cities to feature on its network. To be considered, cities needed populations of 40,000 or fewer, a main street that needed a facelift, and historic homes that needed restoration. Iungerich sent an application along with photos of downtown Fort Morgan. She also hired local video producer Matt Jackson to create a short film showcasing the city’s historic buildings, information about its past, and a possible vision for its future—like a cultural district with arts and restaurants.

Producers eventually settled on Wetumpka, Alabama, which was restored and rejuvenated during the first season of “Home Town Takeover,” which aired in late 2020. There will be renovation projects across the small town. Local news station WFSA12 recently reported that two years later the town is thriving and reruns of the show are still attracting tourists to the area.

Although Fort Morgan was not selected for 2020, producers have not forgotten about the city’s bid. They connected with Chamber of Commerce executive Andrew Stieb, who told the Fort Morgan Times he then watched every episode of season one to understand the show’s premise.

After HGTV producers announced they were coming to town, the special midday rally was announced via the chamber’s Facebook page. It said: “Fort Morgan is being considered for an HGTV show! Come down to Main Street and show your hometown pride in front of the cameras!” Hundreds showed up, including the high school football team and cheerleading team. Local sponsors provided food and all attendees were asked to sign a release statement and wear t-shirts with no logos as the event would be filmed.

When Inguerich found out about the rally, she wondered if the application she’d sent two years ago had anything to do with HGTV coming to town. She was sure to be there on July 26 and was thrilled to witness the announcement in person, telling friends afterwards via her personal Facebook page. “Wow, I’m sitting here tonight still in awe of what happened at little ol’ Fort Morgan… and I had a part of it,” she wrote.

Shortly after the surprise announcement in Fort Morgan, Dave Marrs – who grew up in Colorado and co-hosts Fixer to Fabulous with his wife Jenny – posted a photo of the couples on Main Street. The Fort Morgan Times said Marrs told attendees during the event, “We’re going to spend the next four months renovating homes, businesses and places across the city.”

Entertainment Tonight reported that the two couples will lead 18 projects to transform some of Fort Morgan’s homes, businesses and common areas. The six-episode series will air in early 2023.

The announcement not only surprised people in Fort Morgan, but also HGTV fans across the US, who weren’t expecting the show to return, nor the pairing of the two popular couples. The first season had been such a daunting undertaking for the Napiers that the show was never officially renewed. In fact, in June 2021, Erin Napier replied a Fan request on Twitter on whether there would ever be a second season of Home Town Takeover.

Napier replied, “I’ll be honest, takeover life isn’t as simpatico as family life. It’s been an incredible adventure for us, but probably the only one that likes it until (maybe) our girls are much older.”

However, the division of labor between them and the Marrs helped persuade the Napiers to use their magic on another small town. In her own Instagram post of the announcement, Erin wrote, “Jenny and Dave will help us carry the burden so we can do more without losing our collective sanity. BLESS YOU MARRSES.”