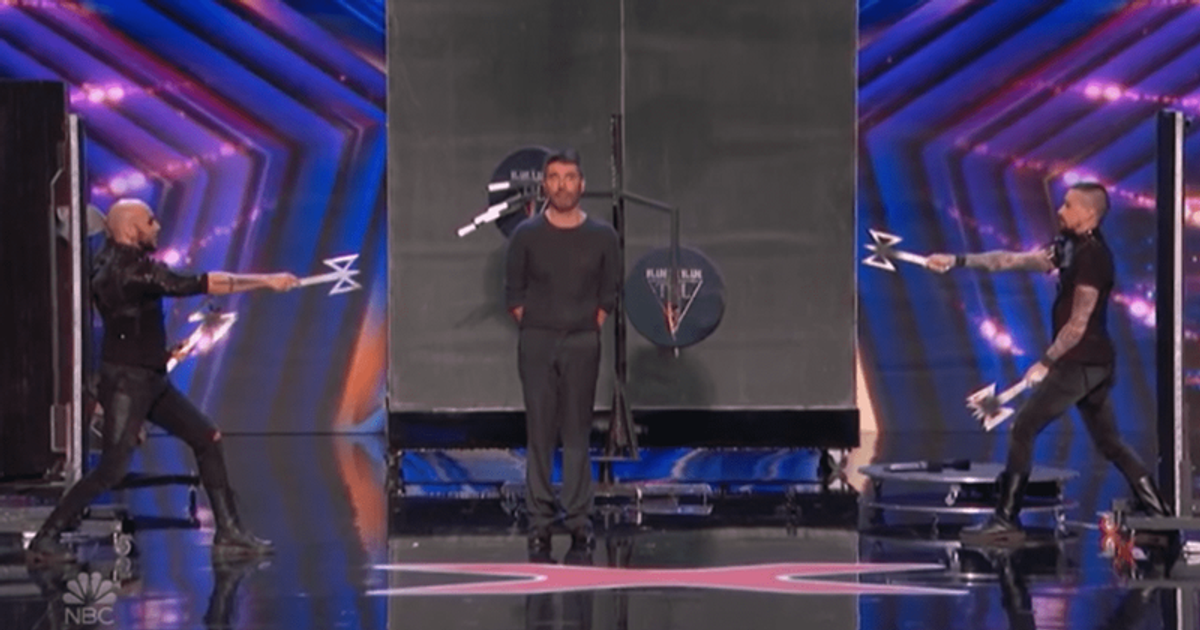 Blade 2 Blade is one of the groups appearing in the third round of the “AGT” auditions. This group apparently includes Michael and Tyrone Laner and Julia Katharina. Blade 2 Blade appears to be a dangerous group made up of two world-class knife throwers. Deadly Games on AGT: Extreme now has some competition in the world of Got Talent. In their trades, these brothers have performed as knife throwers both alone and together. They first appeared in 2021 season 6 of Spain’s Got Talent as Blade 2 Blade. During their rehearsal, the brothers threw knives at portable targets, with the blades frequently falling off. Then they were blindfolded and they threw larger knives at each other. The unbelievable knife throwing precision of the duo inspired the audience and the jury. They reached the semifinals before being eliminated. The duo later auditioned for “France’s Got Talent” but were eliminated during the audition.

After watching a preview with Simon Cowell, many America’s Got Talent fans couldn’t wait to witness Blade 2 Blade’s knife-throwing pair. Despite years of Got Talent experience, this knife-throwing duo managed to keep audiences and judges in suspense.

The brothers, whose father was a knife thrower and mother his target, approached the “AGT” stage with great confidence and trust in each other. When asked where they see themselves in a year, they said they want to be at all the top shows in the world. The brothers quickly begin their performance by throwing knives at each other, being careful not to hurt each other. To up the ante, they are briefly blindfolded and attempt another punch. The judges and spectators were in suspense as the stakes rose.

Heidi expresses her fear throughout the performance. Simon, who said he couldn’t imagine such a situation, was put in such a situation shortly after. When the brothers invite him on stage to be part of their performance, he initially declines but eventually agrees. As the brothers took turns hurling knives over their heads with Simon in the middle, viewers at home took to social media to express their concerns. One concerned fan tweeted: “This literally has to be one of the most intense danger actions I’ve seen #AGT in a long time!”

Another fan wrote: “The Messer boys were great. They held me on the edge of my seat. My mind didn’t want to look but it has to because I love intense and exciting things #AGT.”

Some viewers also believe that the assistant deserves equal, if not greater, credit than the brothers. One of them tweeted: “The assistant should get as much credit for this as the brothers. She is the real heroine of this number. #AGT.”

However, fans were left stunned by the whole action, writing: “They turned him upside down and they’re throwing knives???? No misses!!!! Salute! #agt”

A fan also points out the danger of the act and mentions the accident that happened years ago. The tweet read: “I don’t want to jinx it but I have a feeling if these guys pull it off it could go just as wrong as the guy who was almost badly injured with the flaming arrow during the live shows a few years ago . Anyone remember this? #AGT”.

Fans were skeptical that Simon would share the stage with the brothers. They wrote in response to their concerns about the adored judge: “OH S*IT SIMON IS GETTING INVOLVED #AGT”

Central to the plot, Simon confesses how much it means to them to get ahead in the competition. Simon, like the other three judges, says “yes” to the performance and the duo advances to the next round of the competition.