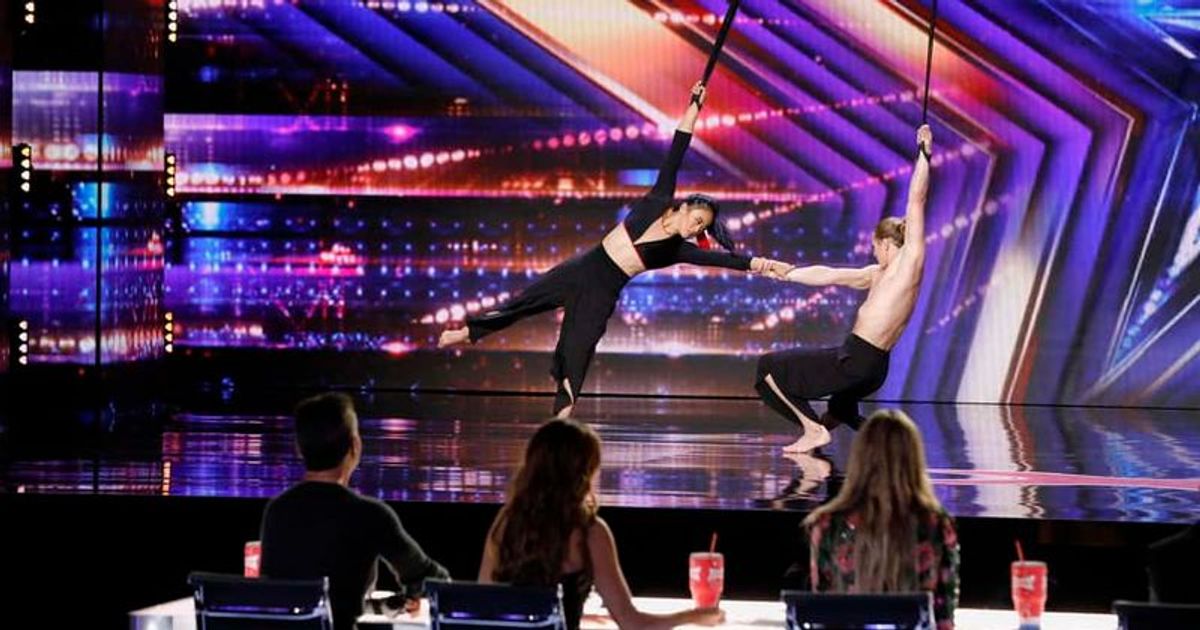 The jury couldn’t get over the fact that Caroline Rinny performed with Maxime Piché Luneau and not with her husband, who was helping backstage

When it comes to acrobatic/aerial acts on “AGT,” the show sees the cream of the crop. So far there have been some phenomenal acrobats like Duo Forza and Duo Rings, both of which wowed the judges in no time. Now it was Duo Mico’s turn to give ‘AGT’ everything they’ve got. Maxime Piché Luneau and Caroline Rinny introduced themselves to the judges on stage.

Rinny reminded the judges that they had actually met before, back in Season 12 in 2017 when her husband Jonathan Rinny appeared and she assisted him. Now the tables have turned when he saw that he was now helping Piché Luneau and Rinny in their act. While Rinny joked that they swapped roles, she added that her dream was to have her own show and to promote her art. When Simon Cowell asked what made Duo Mico stand out from the rest, Rinny explained that they spent a whole year creating original sequences and that their performance sets them apart from other acrobats/aerial acts.

As Duo Mico began their performance, they shocked and awed the entire audience – their performance was like watching poetry in motion. When it came down to it, the judges were more than impressed. Sofia commented that it was both sexy and mysterious and she wanted to see more. Howie Mandel mentioned that they were nearly two stories up in the air without a safety net, making their act a combination of dangerous and exciting. Heidi Klum likened it to a fight scene in a movie and explained that she loved it. Simon said he liked the performance but was more curious about her story when he saw Rinny’s husband helping them backstage.

He asked if she had left her husband for a new partner, which Rinny found hilarious, explaining that Piché Luneau were good friends. The jury was curious as to what Piché Luneau could do that Rinny’s husband Jonathan couldn’t. As Rinny explained, her husband’s specialty wasn’t in the air, which cleared the air instantly. But joking aside, Duo Mico was quick to bag the four yeses they needed to move forward. While fans loved her performance, they were less than impressed with the judges’ questions. “It’s not a new, alien concept for women to have platonic, working male friends. Shame on you #agt @AGT for embarrassing this woman and her husband. Assuming she’s cheating on him. Be better @SimonCowell @howiemandel @SofiaVergara @heidiklum @Terrycrews,” said one fan. “Stupid questions from the judges. #AGT,” added one fan. “Wow, the judges just couldn’t reconcile the idea of ​​a husband happily supporting his wife as a star without repeatedly hinting at cheating, sex jokes or toxic male competition. Kudos to this performer for happily turning her off and not playing along #agt,” said one fan.